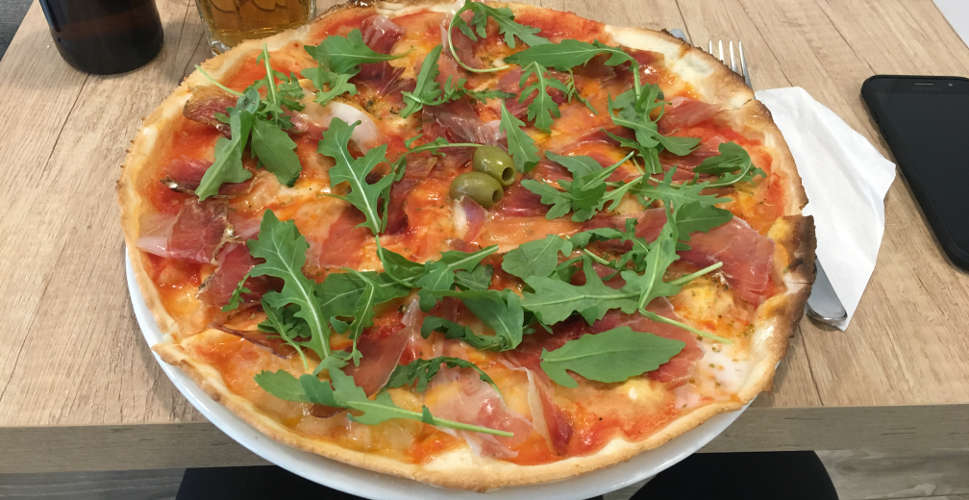 Belgrade: GlutenNo restaurant, gluten-free food at their tables or anywhere else in the city

After a first gluten-free experience in Novak Djocovic’s restaurant, the Restaurnat Novak 1, we started a new day with the first meeting in Croatia. We had another two hours one way and, since we had another meeting a little further away, another three hours back to Belgrade.

It had been many years since a border with passport control had passed with the car. Since my trip to Scotland in 2012. 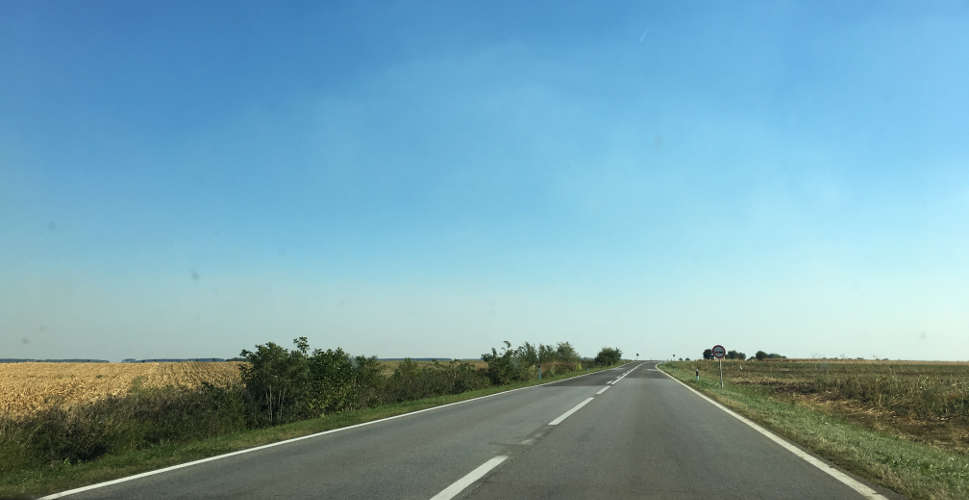 In the towns and cities that crossed we still saw the marks of a recent war… also, Djurica was explaining the history of some places so that I could understand the real meaning of some monuments. Even so, the country seems quite recovered. As I had left from Madrid, I had brought some pastries from La Celiacoteca with me. I took some for breakfast when we stopped to refuel. The “just in case shopping” is something that has saved many breakfasts throughout my travels… it is important to always carry something gluten free with you. 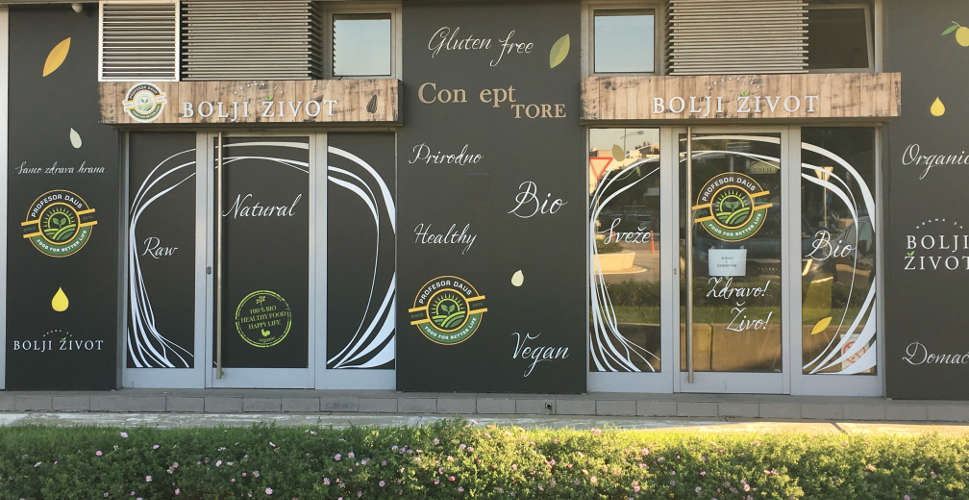 After the second meeting we arrived back in Belgrade about four in the afternoon. We were hungry, so we went straight to the GlutenNo restaurant on Jurija Gagarina Street 14E. It is close to the Bellville Shopping Center. Not very close to the city center, but it’s worth going there.

Near where we parked, we saw another organic and gluten-free food store that was about to open soon. But this was not our goal. We wanted to go to GlutenNo! We had not been able to go the previous day because they close at 6pm. Too early for the pace of travel we had. But this time, we had arrived on time. 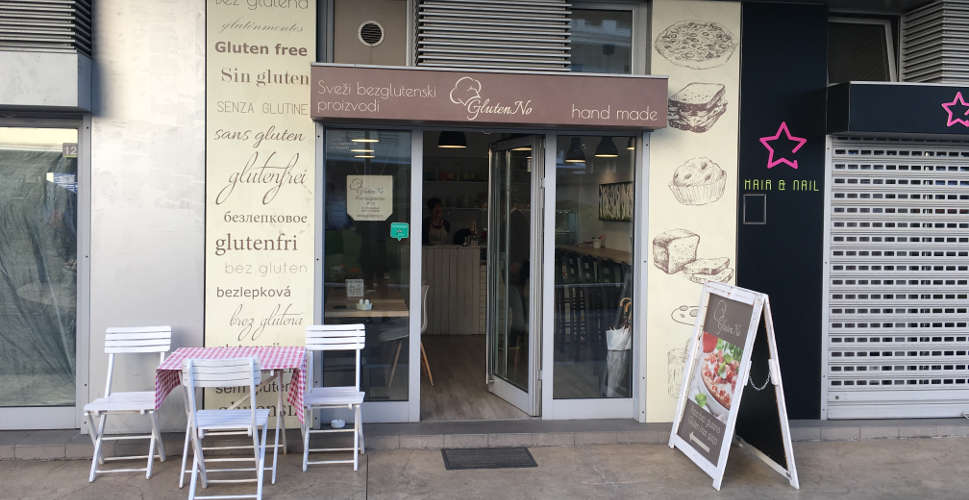 It is a small restaurant where everything is gluten free. As they explained to us there, and you can find on their website, the Postran family founded the first gluten-free restaurant in Belgrade a few years ago, after having overcome a severe illness caused by gluten.

The price of the products and the difficulties they had to find gluten free products, as well as the great ignorance about celiac disease, led them to start their own gluten-free adventure. 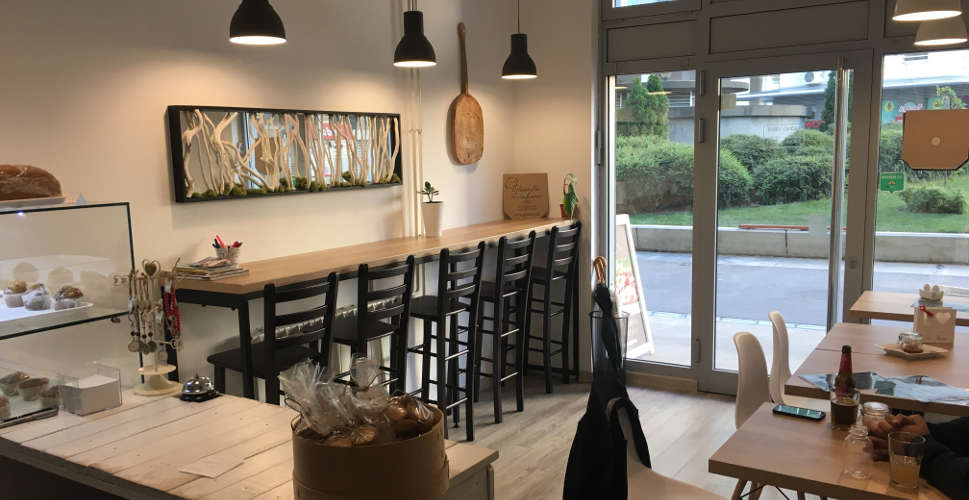 They have 4 tables for two people and one bar with 5 stools. I guess that such a limited capacity is what allows them to give a quick service.

They also offer “take-away” service or they bring it to you wherever you are. And this is literal! I tell you about it at the end of the post…

Although they have few tables and the place is small, we were very comfortable. We did not lack space at the table at any time. 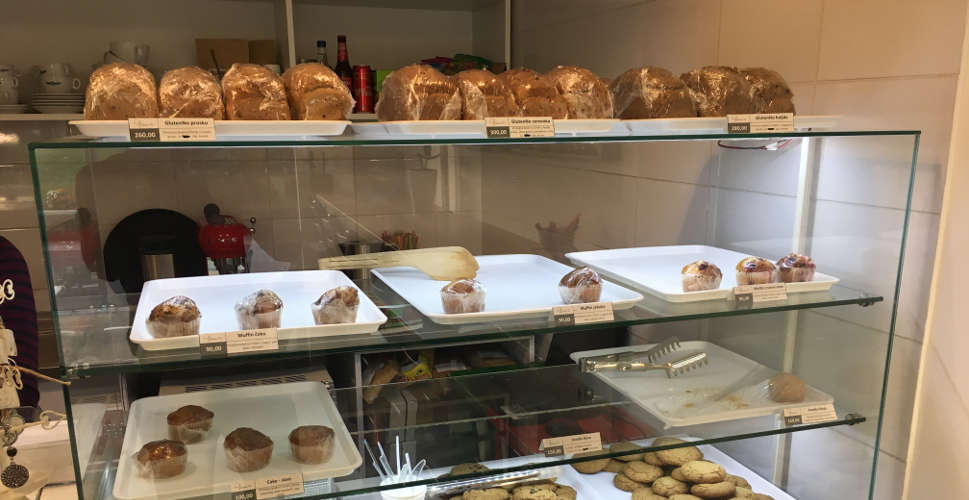 While we were talking to the owner, I took the opportunity to see everything in the display case. In the early hours of the morning it would be full, but at that time they had already sold a large part of the products. There were several options: large and small cookies, sweet and salty muffins, breads and other products to cook at home. Too bad I had only brought a cabin suitcase… I’ll have to come back to this restaurant with Isa! 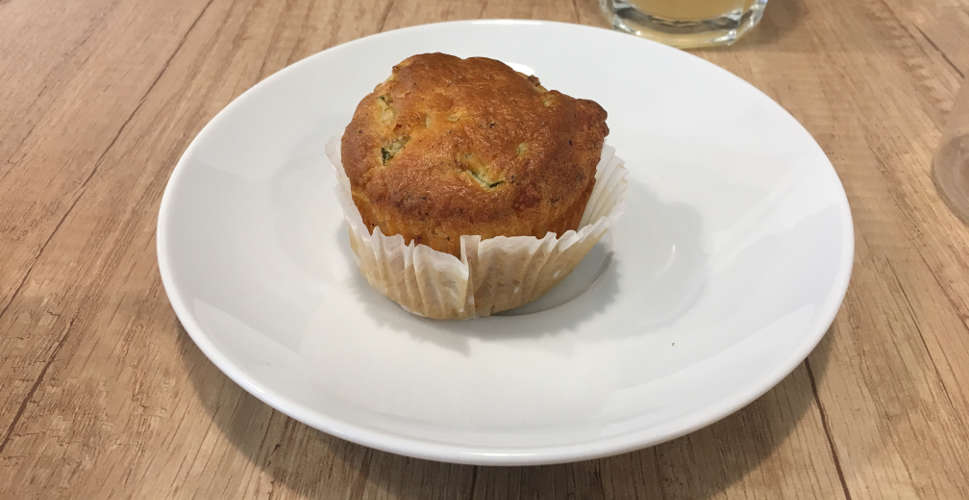 Then they brought us the gluten-free menu. They have a quite extensive gluten-free menu, with salads, pasta, gnocchi and pizzas among others. We were hungry and a lot to choose from. While we waited, we ordered a gluten free muffin with mozzarella and ham to calm a little appetite. It was delicious! In addition, the texture of the dough was very smooth and the mozzarella and ham gave it a contrast of very interesting flavors and textures as well.

Djurica, my Serbian partner, decided to order a pasta dish.

If we would have finished the meeting at the scheduled time, we could have gone to visit

As long as I have the opportunity to eat a gluten-free pizza, I do it. So I ordered a pizza. Before, I asked some things about the ingredients they used to know if I could go with Isa in the future. She is allergic to gluten and, in some restaurants, we have found that they used “gluten-free wheat flour” or “gluten-free wheat starch” for the dough.

They confirmed that they only mixed gluten-free flour with rice flour and buckwheat. They did not use any ingredient that came from any of these cereals. Perfect! We already have another destination to visit with Isa.

I had forgotten about the lactase pills in the hotel, so I did not want to risk eating too much cheese. Finally, I decided on a pizza 32 cm in diameter – there is another smaller size, 20 cm – with tomato, ham, arugula and lactose free cheese. The lactose-free cheese was vegan, made from coconut oil. I liked it because I did not notice the taste of coconut, so I could enjoy the flavors of the main ingredients of the pizza.

To drink, I was able to enjoy a gluten-free beer Damm Daura. I am sure you know it! It’s nice to find familiar products when you travel. 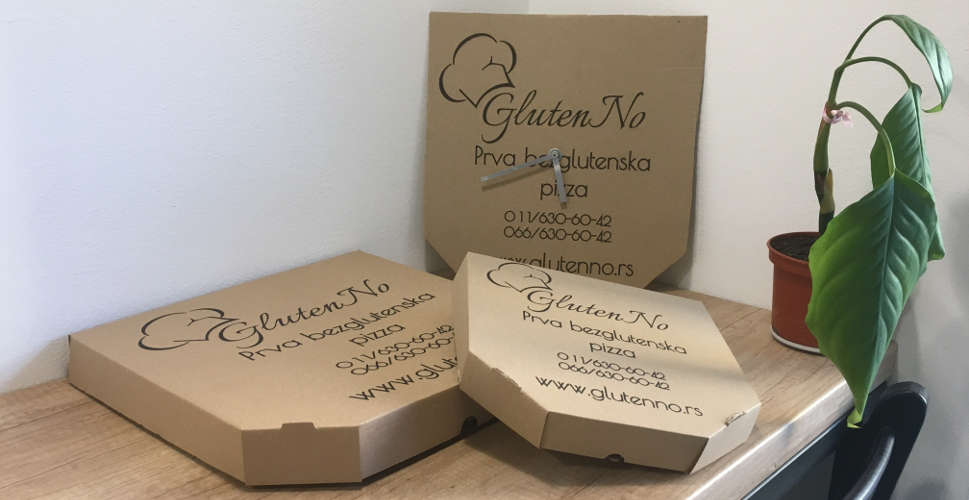 When we finished, we went for a walk around the city. Djurica explained the history of each place where we stopped.

After walking for a while through the pedestrian streets of the center, we reached the castle. It was already dark, but you could still enter the walled enclosure. It is impressive how they have adapted this fortified area, especially the moats, where they have put a museum of military weapons, tennis courts and a dinosaur exhibition. 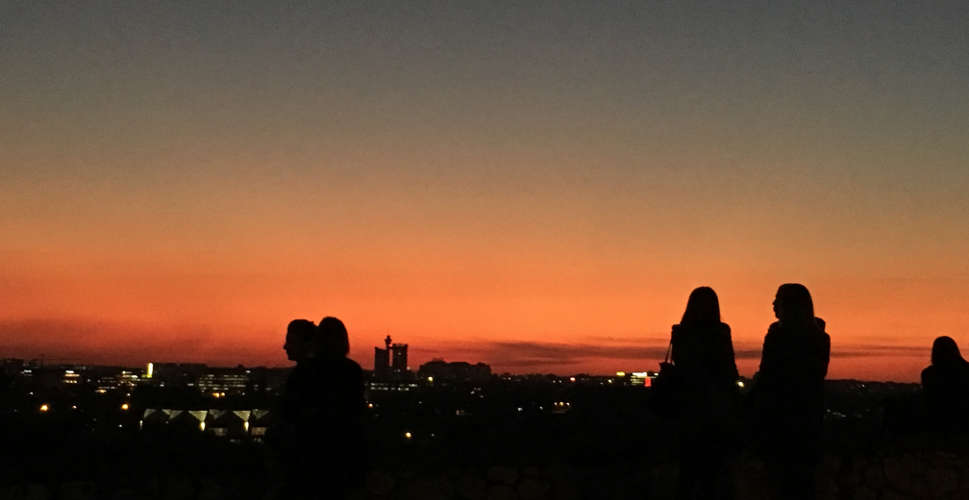 From the entrance of the castle we could see the sunset. Although it was not the same as when I see it with Isa, it was very beautiful. It was full of couples admiring it. Then we continued walking while Djurica explained to me that, right in front of the Poednik statue, is where the Austro-Hungarian ship initiated the first attack that unleashed the first world war. I still did not know, but a week later, I would be with Djurica again in the place where Francisco Fernando de Austria and his wife, the Duchess Sofía Chotek, were assassinated.

After a while, we returned to the hotel to rest until the next day.

It was already the last day in Serbia. Compared to the other days, we got up at a reasonable hour or less. I had a brownie I had brought from Spain and we went back to the road to the next meeting.

That day we had two meetings before going to the airport. Between meetings we stopped at a restaurant where there was too much risk of cross contamination and I preferred not to eat anything… I would find something at the airport or I would eat the last cookies of the “just in case shopping”. 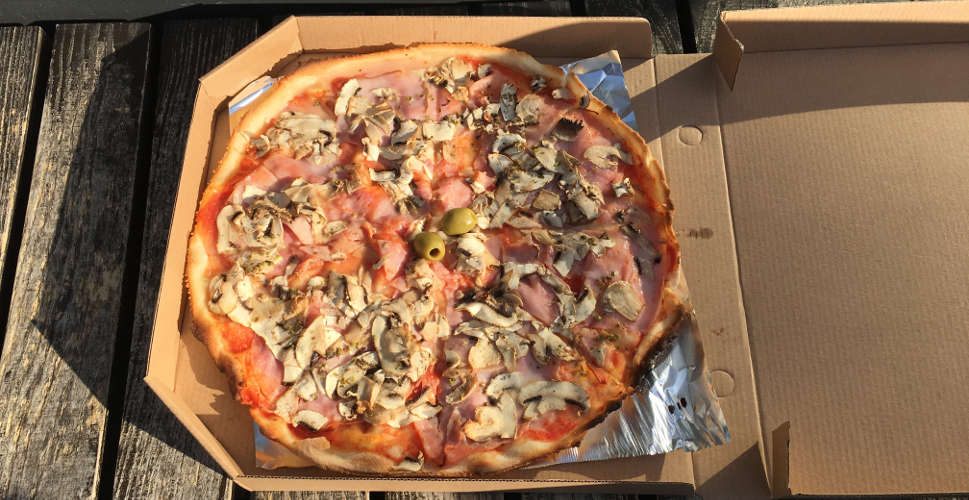 When leaving the second meeting, there was no time to go back to Belgrade to get a gluten free pizza to take away in the restaurant GlutenNo… what a shame! But suddenly… bingo! I remembered that they had explained to us that they were also making home delivering… Djurica called for me at the restaurant and asked – in Serbian – if it was possible to deliver a pizza at the airport. “No problem” they said… Awesome! I think it’s the weirdest place where I’ve had a pizza brought… I ordered a small Capricciosa, since I did not want to eat too much before catching the first plane.

The order was made… now we had to arrive to the airport before them. They would deliver the pizza by car. It was great because I could eat very well before boarding back to Madrid… or so I thought, since there had been a mistake and I was going back to Barcelona… what a horror! I would arrive very late at night and, the next day, I would have to get up early to take the fast train back to Madrid and get to the Celiacos en Directo program in which we appeared that same afternoon. As we like to say… it’s part of the adventure!

These are the supermarkets and restaurants without gluten in Belgrade that recommended me in CYE:

AND HERE WE LEAVE THE CELIAC TRAVEL CARD IN SERBIAN: