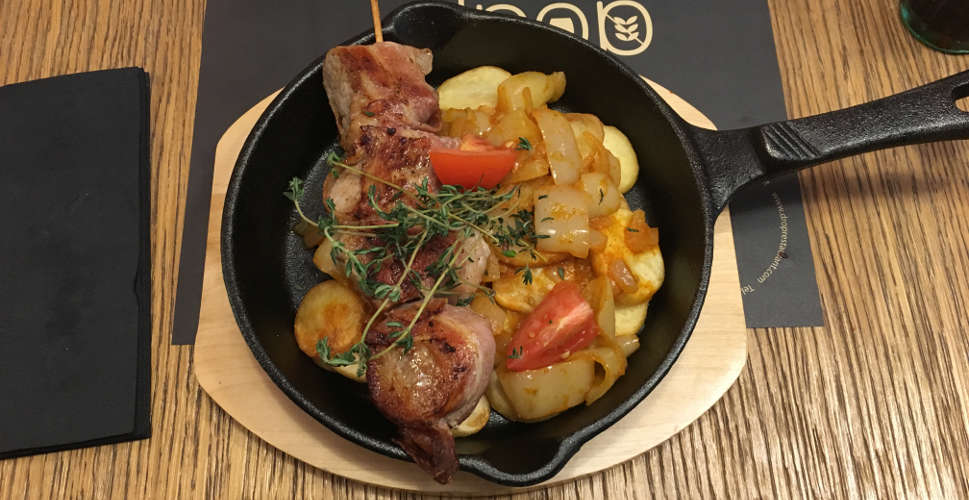 Budapest: a 100% gluten free restaurant in the heart of the city

After the first three days in Budapest, we only had two left before going back home… time flies! We had seen almost everything we wanted to see, and now it was time to relax. That day, we were going to visit the majestic building of Budapest Parliament. As we said in the previous post, it is advisable to buy the tickets in advance so that there is availability for the schedule that best suits you depending on how you have organized the rest of the trip. We did not do it that way, and that day we had to get up early as we were the first to enter. 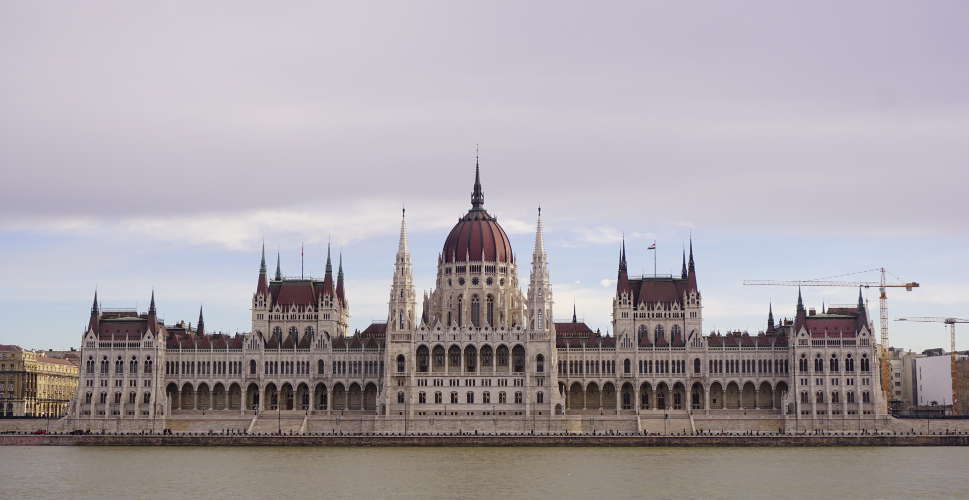 The visit was very pleasant and with some risk point for some of the visitors… and it is not because the guide did not warn us! While we were looking at the crown, the guide informed us that we should stay away from the guards who guarded it. And with good reason he warned us… the guards are staying still and, from time to time, they make a movement to change position. The danger is that the movement is done with the hand that holds the saber. One of our group seemed to give little importance and got a good fright when the guard’s sword passed pretty close to his chest. It reminded me a lot of those videos of tourists bothering the royal guard in London. 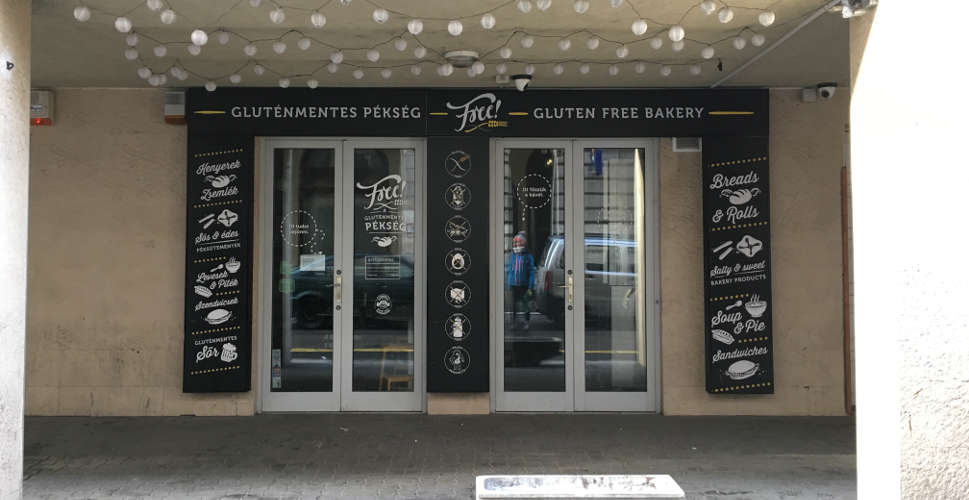 When we left Parliament, we had a mission! We had already tried 2 times – without success – to go to the bakery Glutenmentes, on Dob street number 30, near where we had the apartment. On all the occasions we had found it closed. Of course, it was due to the dates we were (New Years Eve and Christmas Holidays).

This time we found it open. We were so happy! Although it is a very small establishment, everything they offer is delicious! We bought the following: 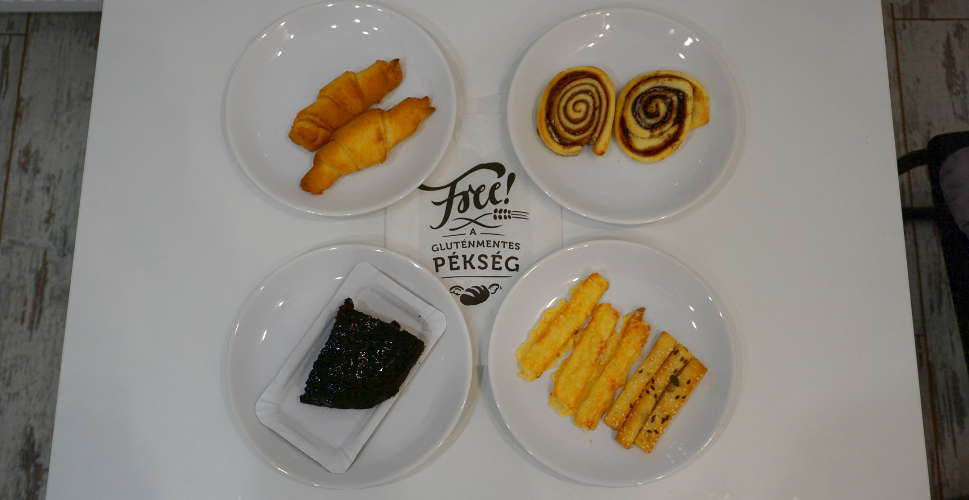 When we got home, we were supposed to prepare some sandwiches to eat after the spa but we could not avoid eating a bit of everything we had bought. We were dying to try it! It was so good… OMG! Awesome!

Once we satiated our appetite a bit… we prepared the backpack and the sandwiches and went to the Spa. It took us about 40 minutes walking to arrive and, although the weather was not very good, we could see the big houses and mansions – some in ruins – of the Andrássy avenue. 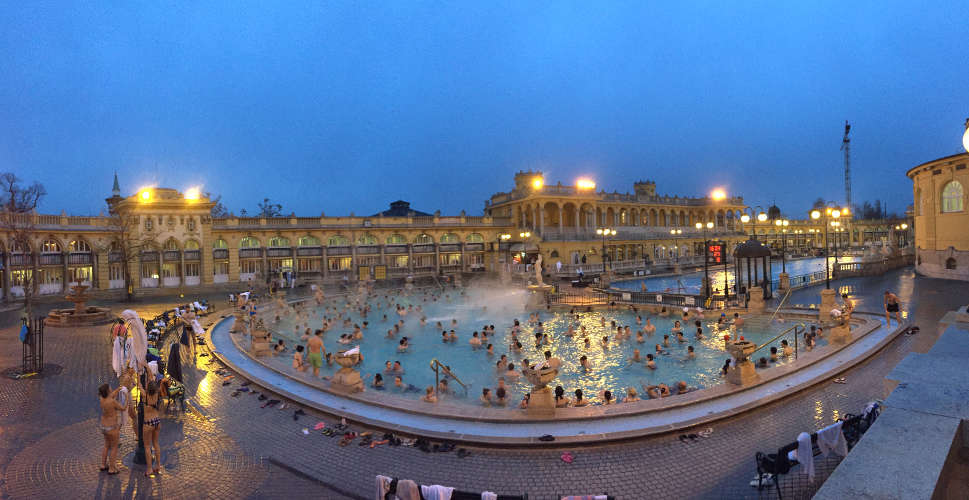 Although in the counter it was written that they only accepted cash, luckily we could pay with credit card. In any case, if you are planning to go, try to take some cash with you… just in case! We put our swimming suits up and went straight to the outdoor pools. There are two, one in which the water is at 37 degrees and the other in which the water is at about 20-25 degrees (more or less). Although there were many people, there was room for everyone there. Inside it was already a little tighter, but we were fine anyway.

When leaving, around 4pm, we were really hungry. After the bath we wanted to go ice skating. We could not do it because it was raining quite hard and, after eating the sandwiches in the spa portal, we decided to go back home. 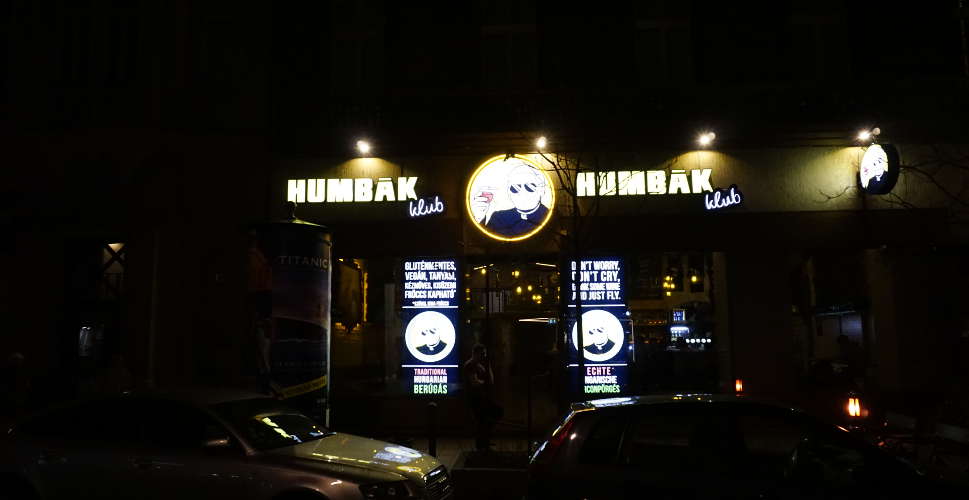 On the way back we saw that, on the street Erzsébet number 12, there was a sign indicating “glutenmentes” in the Humbak restaurant. We did not enter but we write it down in case it can be of help for any of you. (correction of 05.03.2018! this is just a bar, they do not have anything gluten free inside! read the comments below please).

The next day – the last of the trip – we got up early to close suitcases and take them to the apartment’s offices. We had the flight at 8pm and we wanted to take advantage of the day. In fact, we decided not to go for the boat trip through the Danube river and we went ice skating instead. It was what Isa wanted for her birthday! 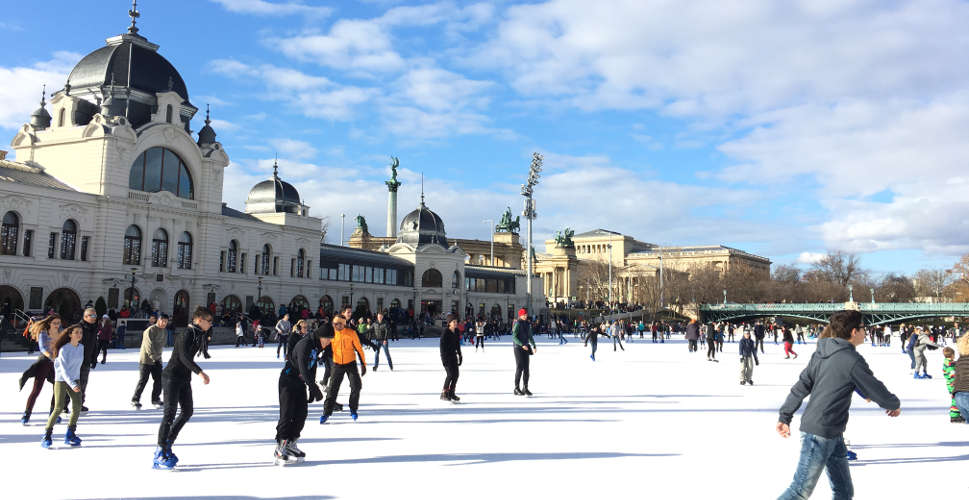 It was a perfect day! After skating a couple of hours, it was time to eat. This time we had reservations at the Drop Gluténmentes, a 100% gluten-free restaurant on Calle Hajós number 27. This street is perpendicular to Andrássy Avenue, relatively close to the Basilica of San Stephen.

We hallucinate with the gluten free menu! Apart from the fact that everything was gluten free, there was a lot to choose from. 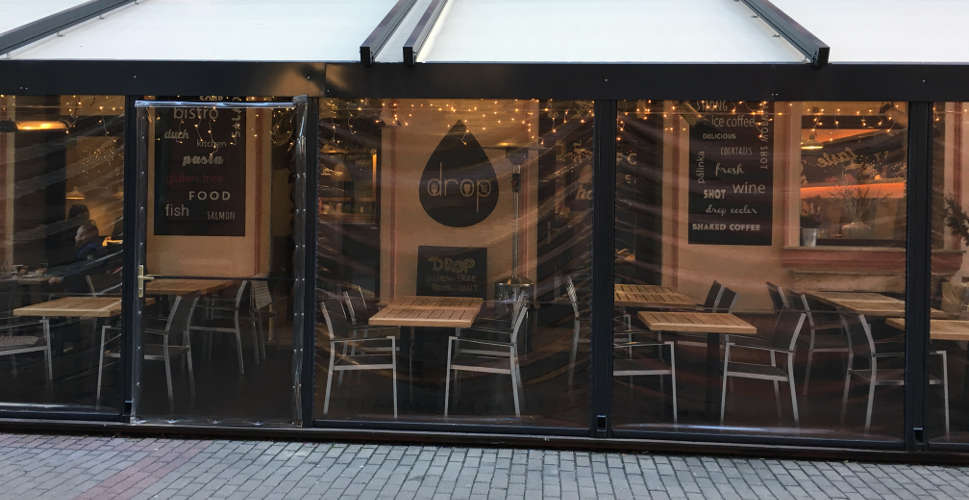 When the waitress came to our table, Isa asked her about the burgers and me about the typical dishes. Opposite of what we did at Grimm bakery in Vienna, this time we asked the waitress if they used gluten-free wheat starch and she told us that only in the hamburgers. Immediately we discard them, since Isa is allergic to wheat.

After reading the menu several times, we both opted for the typical food. As a started, we decided to share a plate of cheese. To share, as always! 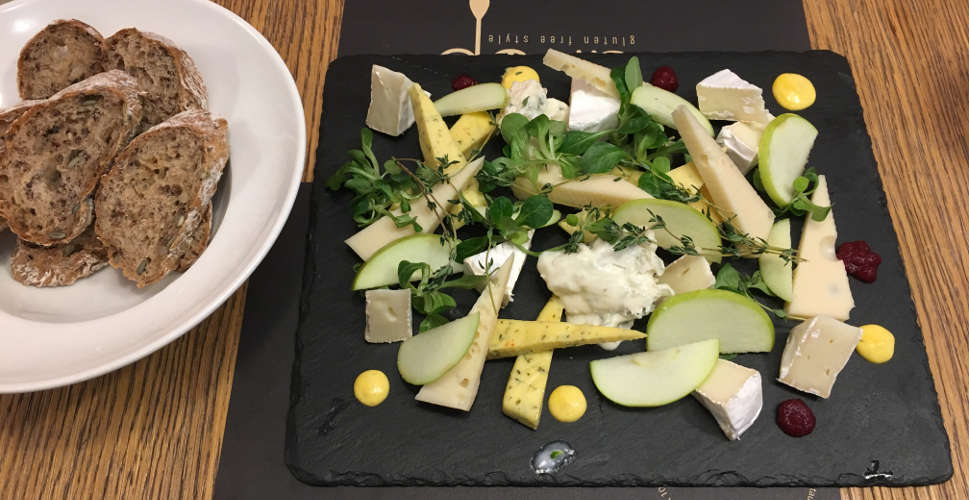 As main course, Isa ordered a bread crumbed chicken with saffron, stuffed with cheese and accompanied by mashed potatoes and salad. I opted for the skewer of pork fillet with Hungarian ratatouille and chips. Both dishes were really delicious!

Although we were full, we wanted to try the desserts. There were several options, but in the end I decided not to eat anything – I already had enough food – and Isa ordered a chocolate milkshake which, for the face she had while taking it, was very tasty for sure. 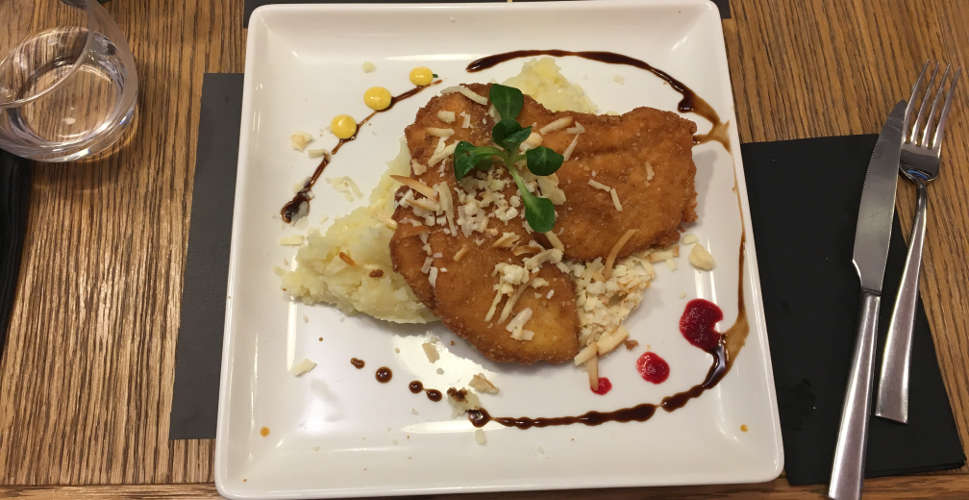 When leaving the restaurant, there were still a couple of hours left for the taxi to come to pick us up, so we went walking again to the Parliament to see it for the last time.

Arriving at the airport, it took a while to be able to check in our bags as they opened the Ryanair counter very late. After passing the security checkpoint, as usual with this airline, there was still half an hour left to indicate the boarding gate… we almost lost the flight! We sat down to chat and we suddenly realized it was boarding time… we had to run to the gate. Luckily we had priority boarding and we skipped all the queue… 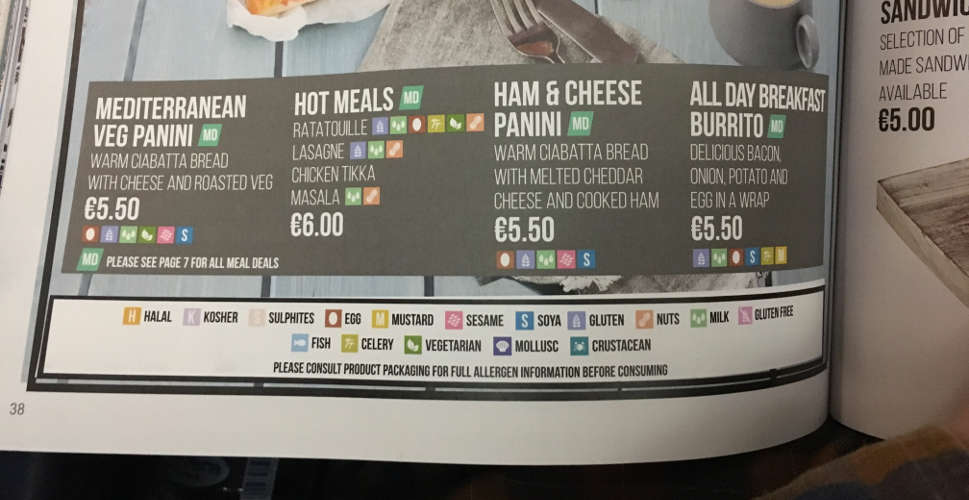 When the hostess asked if someone wanted to eat something from the menu (paying, of course), we asked the her if they had something gluten free. Surprisingly, on Ryanair they have gluten-free food! From what we could see, they had:

These are other gluten-free restaurants in Budapest that we discovered while strolling:

You will find the supermarkets in the first part of the trip.

AND HERE WE LEAVE THE CELIAC TRAVEL CARD IN HUNGARIAN: