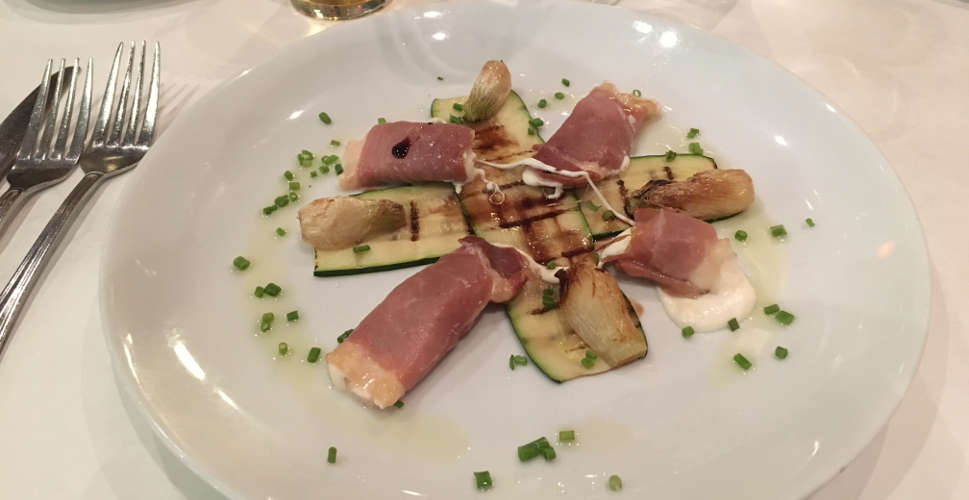 After another amazing weekend in Madrid eating at Foster’s Hollywood, at Más Que Bocados Sin Gluten and at La Celiacoteca with Isabel, I returned to Chicago, this time flying with Iberia.

As always, I had indicated all my allergies – fish, fruit and gluten intolerance – in the flight booking. After my fatal experience with Fly Emirates, I am always restless before taking a long flight. But this time, they did it well.

If you fly from the T4S of Madrid, just note that in the Caffriccio Cafeteria they have some gluten free pastry. 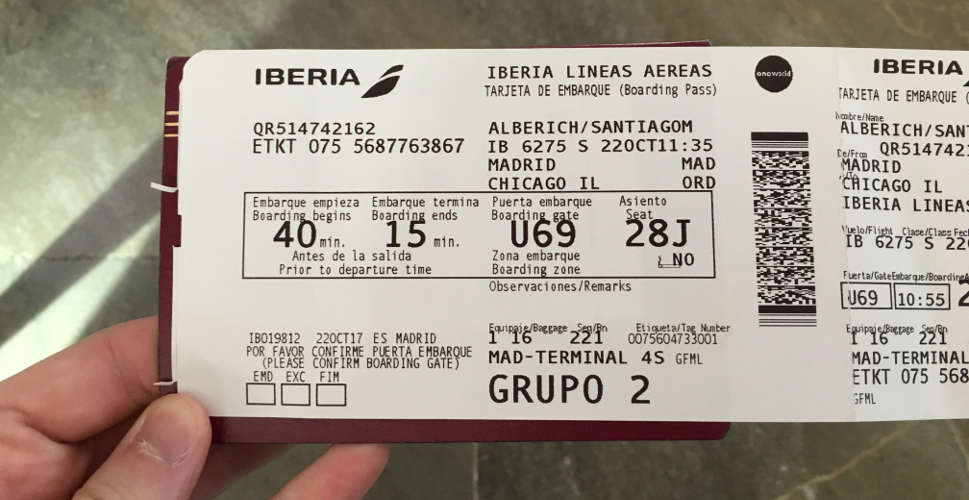 As you will see in the ticket, at the bottom right, the initials GFML (Gluten Free Meal) appear. It is important that you check it when you receive the boarding passes, because if is not indicated it, it means you will probably not have anything to eat.

Even so, they keep always putting fruit in my special menus… I guess by inertia when preparing them. The day I can eat everything on the menu, I’ll make a party! 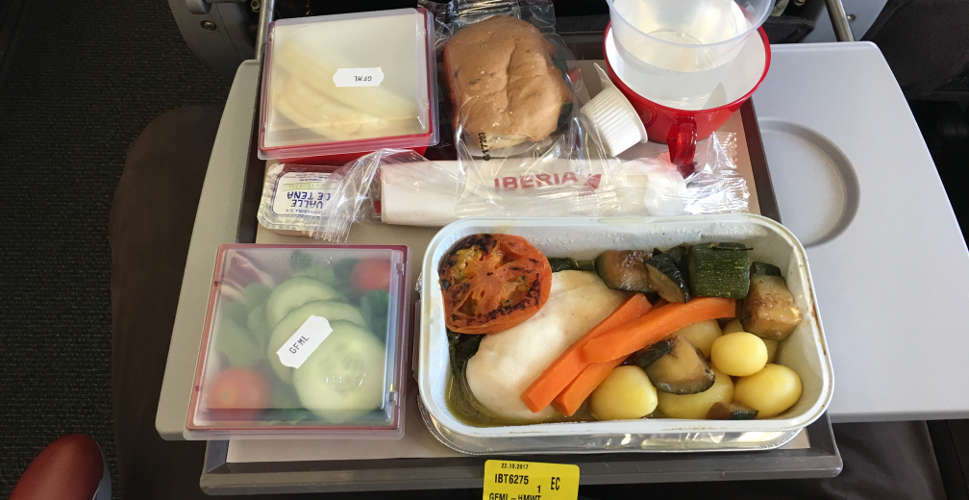 This time they brought me a quite complete menu: a salad, a chicken dish with steamed vegetables and for dessert a fruit salad… although I always indicate that I am allergic to fruit, it is always there. At least they do not bring me fish like in Fly Emirates. That flight was a total failure!

After a while, I was already watching the third movie, and I ate a pastry from La Celiacoteca. In all the trips I make taking the plane from Madrid, I always try to take some food from this bakery. Besides, they always end up saving my breakfasts!

There were two hours to arrive and they brought us the second meal. This time, there was a caprese salad, a muffin with a butter and a jam capsule, and guess what else! Exact! More fruit! Sometimes I have the feeling that it is useless to fill out the forms that you are given so that you have “a comfortable and pleasant flight”. 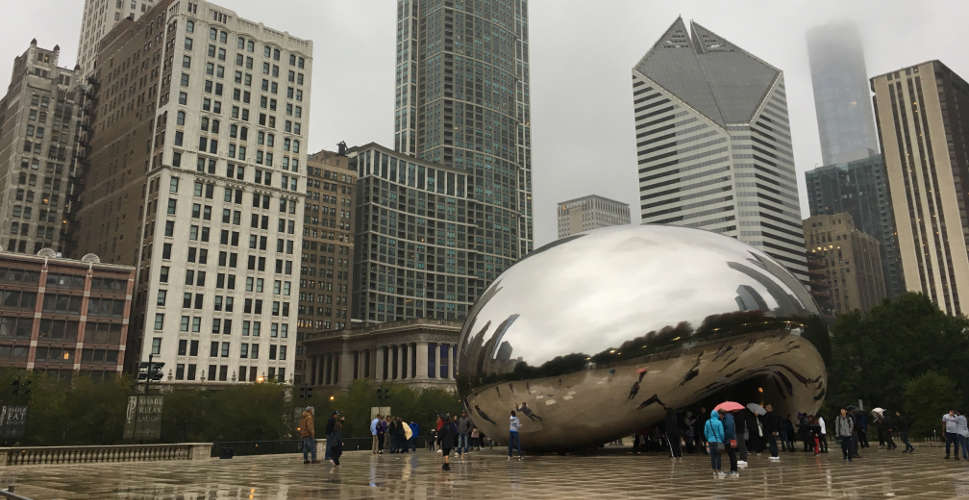 As expected at that time of year – I was there at the end of October 2017 – the weather was awful. When I arrived in Chicago, it was cold, it was pouring rain and the wind was so strong that it literally bent my umbrella. Now I know why they call it the city of the wind.

I met Karl at the hotel bar. We were close to Chicago’s Cloud Gate and had planned to go for a walk, but bad weather didn’t allow us to do it.

We stayed there until the storm ended, and I took the opportunity to order a gluten-free beer. I tried the Two Brothers. It was not bad!

Then, we went to eat at Ditka’s at number 100 E Chestnut Street. The last time I was to Chicago I ate there and the meat was so good that I wanted to repeat. 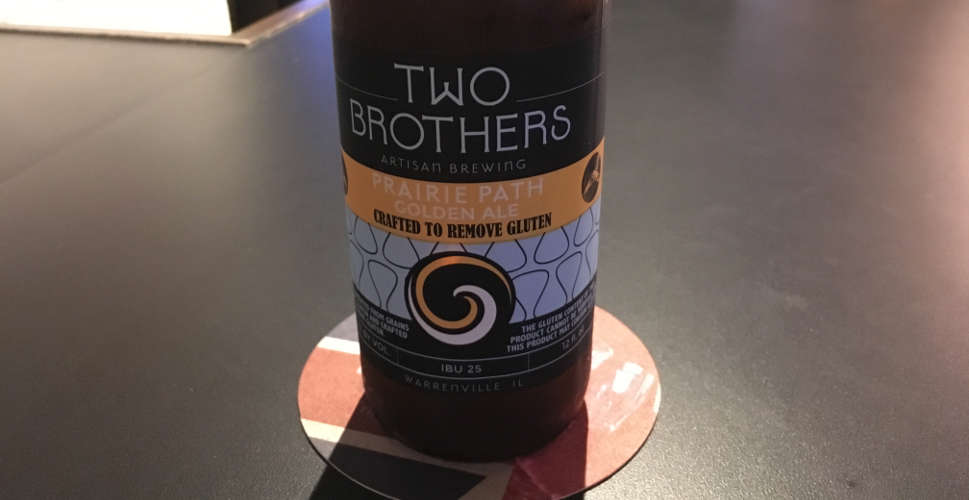 The next day, I had some pastries from La Celiacoteca, and I left for Downers Grove, a small town with the perfect name for a horror movie that is 30 miles from Chicago. To give you an idea, Downers Grove is the size of Huesca, Cuenca, Alicante or Seville with around 50,000 inhabitants.

The headquarter of the corporate group where I work is there. We were going to spend the next two days there meeting with the other Marketing Directors of the operating companies. 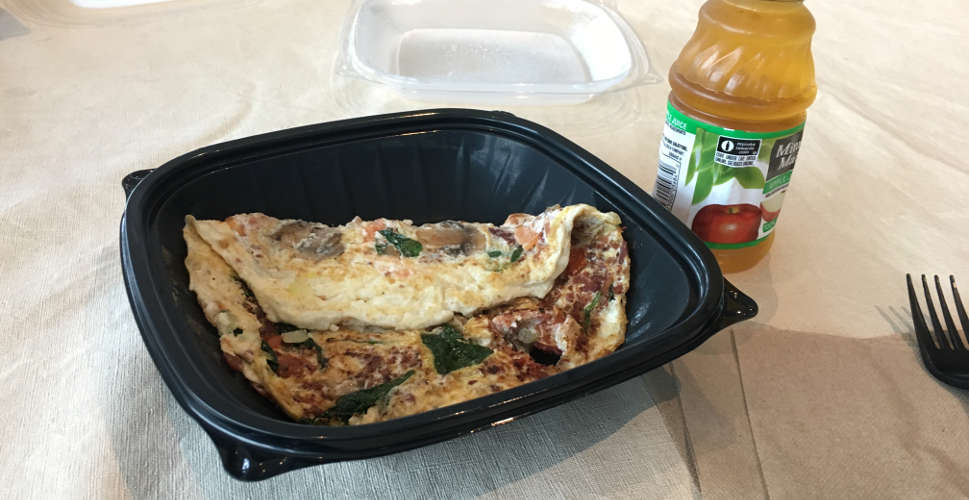 Lunch time was a little bit difficult, since we went to the cafeteria of the building where the offices are, Deli Time, and although there were some indications of gluten-free dishes, I had some doubts that they really controlled the cross-contamination.

Finally, I decided on an omelet with vegetables and I did not dare to eat anything else. I did not want to start the days feeling bad… 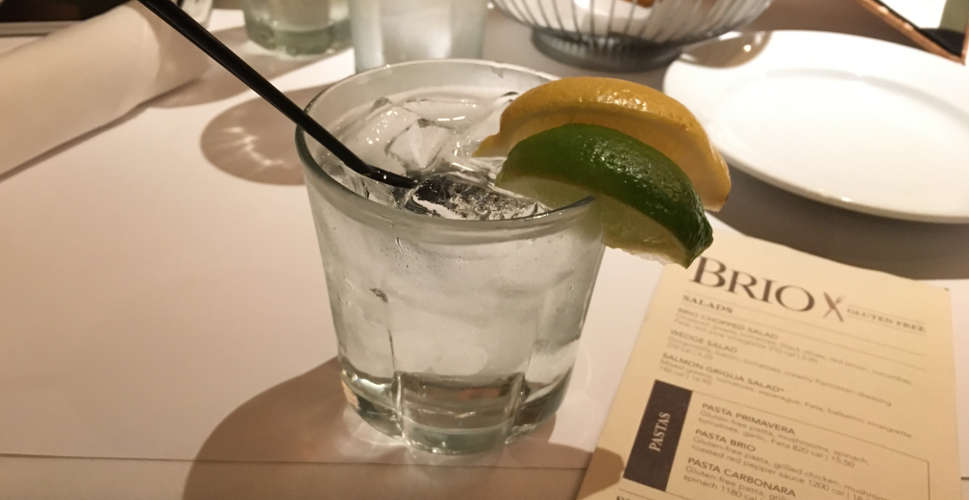 At night, when we were all together, we took the hotel bus to the Brio Tuscan Grille restaurant, an Italian restaurant in the Yorktown Shopping Center, five minutes from the hotel. This is a chain of restaurants present in the main cities of 21 states.

There I tasted Titos for the first time – vodka with soda – which one of my companions recommended. Although a bit bitter, I liked it. When the waiter arrived, I asked for the gluten-free menu. Immediately he removed the normal menu – size DINA3 – and came back with one size DINA5. As always, our options are smaller. 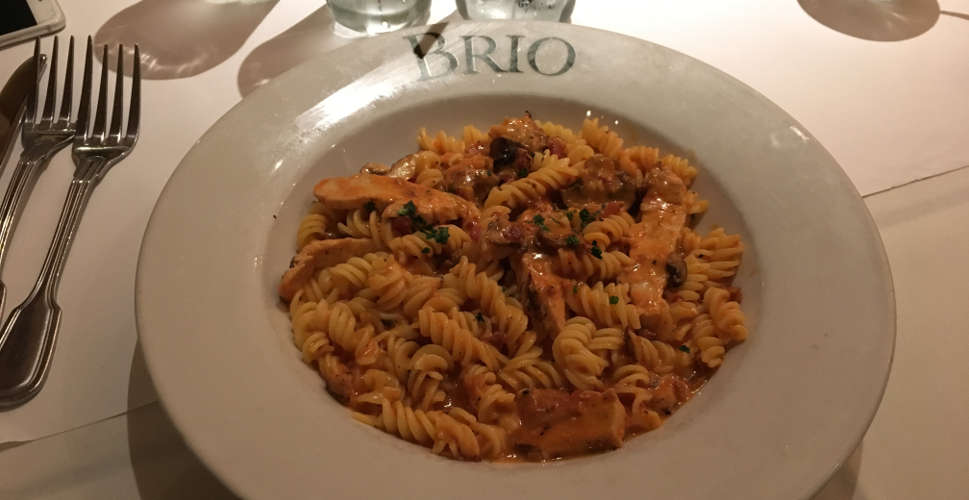 In the menu without gluten, there were three options of each category of dishes: salads, fish, meat and pasta. There was no gluten free dessert. The decision was quick. I chose Pasta Brio, a plate of spirals with grilled chicken, mushrooms and red pepper sauce.

We were staying at the Double Tree of Downers Grove, a Hilton hotel. When I went down to the dining room, I asked one of the waiters to indicate me what was gluten free. The man began to point to some trays, but he did not transmit much security. In addition, there was too much risk of cross contamination. I had to eat the pastries I brought from the Celiacoteca again, since there was nothing for me at the hotel’s buffet. 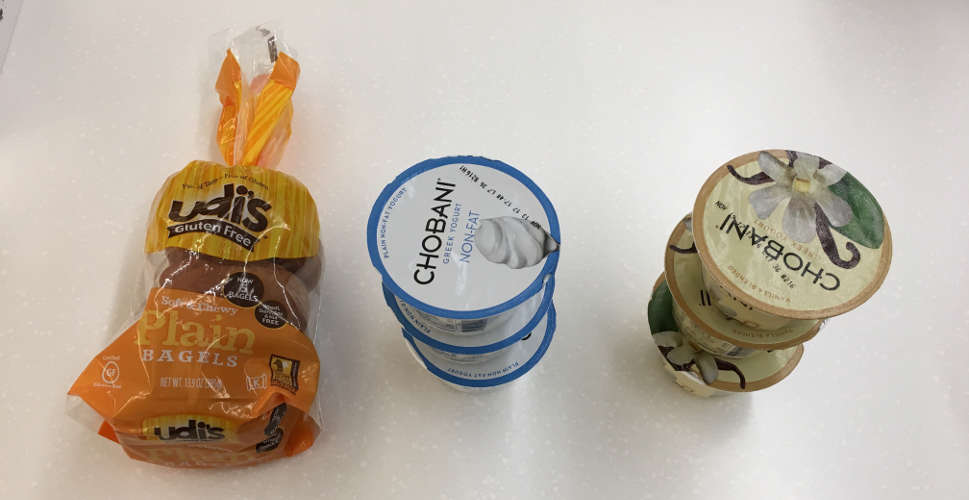 Upon arriving at the office, everything was better prepared. For mid-morning breakfast, they had bought some gluten-free bagels, which I could accompany with chocolates and yogurts.

For the mid-day meal, they had contacted us in advance to request it to suit each one at the Corner Bakery Café. On their website, they have a section called “Allergen Menu”. By selecting the allergens you want to avoid, set your plate. They are in 25 states. 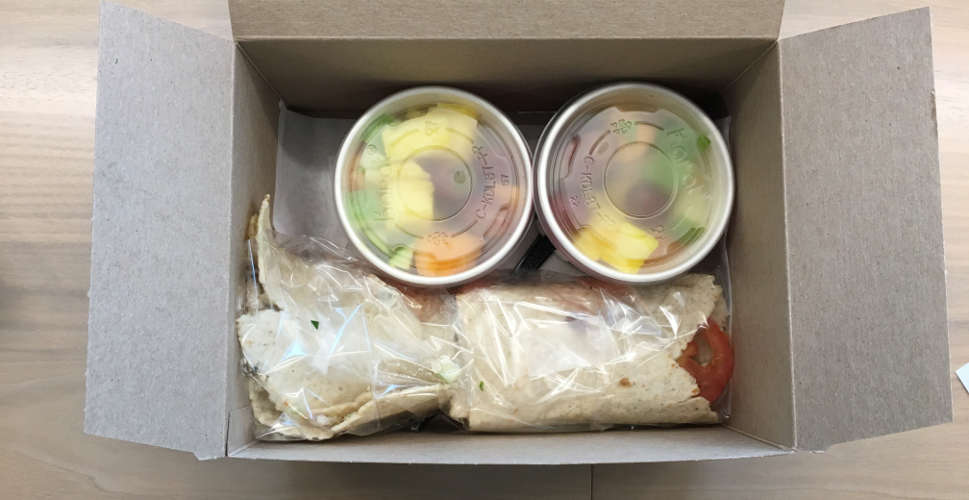 I chose the DC Chicken Salad which consisted of a chicken salad rolled into a gluten-free pancake. Like the Mexican burritos. It was good, but there were pieces of apple inside. When I realized – I had already eaten some – I started to remove them. I had to do it because I am allergic to profilin, a protein that is on the skin of fruits and vegetables. Luckily, this protein breaks down when we cook these foods and I only have problems when I eat them raw. Luckily I only had a little itch on my throat!

In the evening, they had organized a dinner for the entire team at the Carlucci Restaurant Bar at the Yorktown Center, next to the hotel. From what I have seen on their website, the Hamilton Partners group seems to have closed this chain of restaurants. 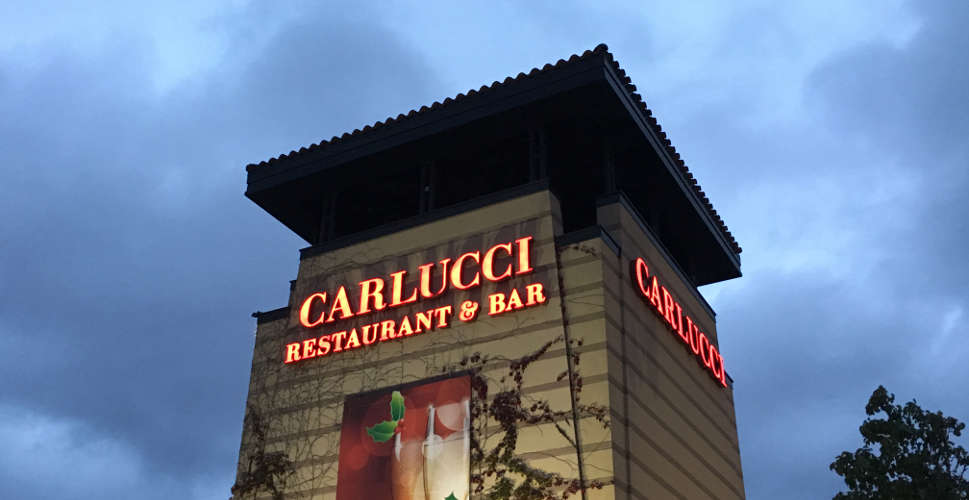 They agreed to share the entrees and then everyone could order a main dish. As they ordered some dishes that contained gluten, I ordered everything separately for me. The waiter – a rather weird guy – told me that his ex-partner was celiac and that he knew all about it.

He recommended me to start with an antipasto of grilled mozzarella wrapped in cooked ham. Delicious! In addition, it was accompanied by grilled zucchini that I also like a lot.

As a main course, I ordered the linguini, one of the special dishes of that chain of restaurants. They were gluten-free noodles with pieces of cooked ham, basil and scrambled inside a wheel of Parmesan cheese. They could not toss them into the parmesan wheel, since they did not have a parmesan cheese wheel just for coeliacs. In order to serve them in the closest way to how they normally serve it, they did it apart, in a pan. 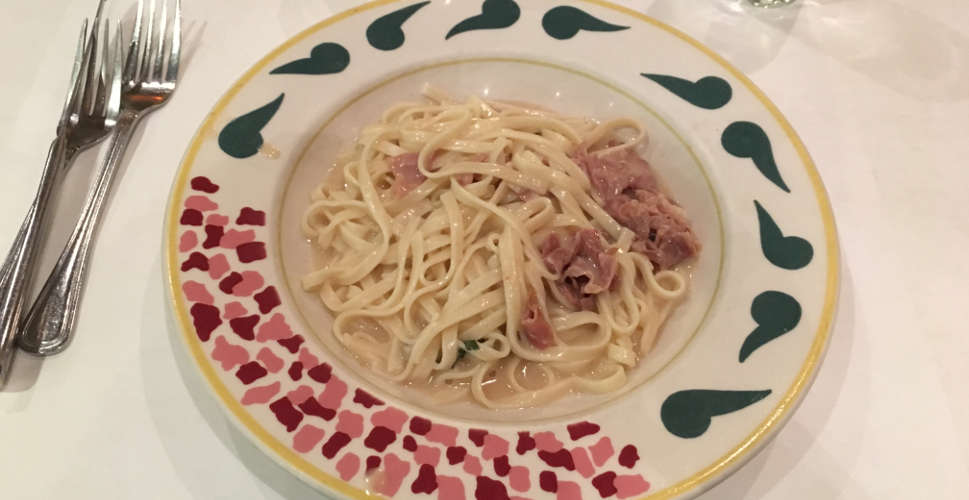 The next day, it was already the last day of the days, but Karl and I stayed one more night to visit one of the factories. That day we would take advantage to visit downtown Chicago and dine in one of the most amazing restaurants I have ever been to. On the 95th floor of the second tallest skyscraper in the city of the wind. 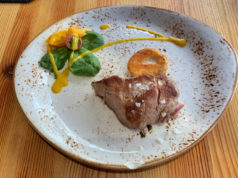 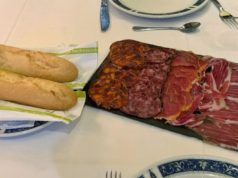 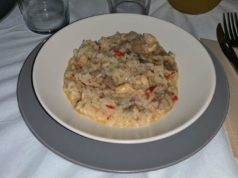 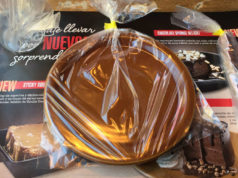 How to avoid cross-contamination in restaurants?