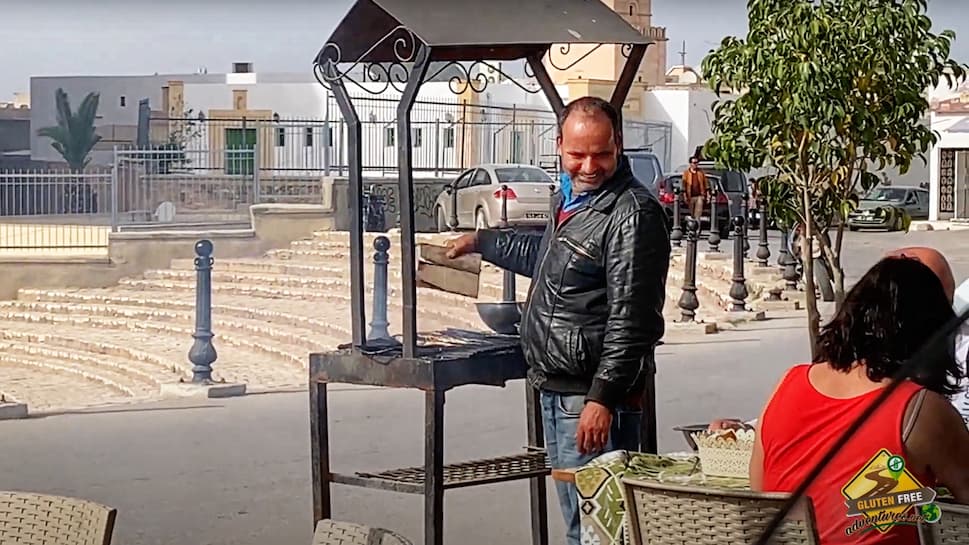 El Djem: luckily I didn’t eat that lamb in front of the amphitheater.

The off-road tracks and sand dunes were over for this trip. The next stage was to get closer to Hammamet to stay at the same hotel of the first night in Tunis. Exactly! That hotel that looked like a castle where we stayed just over 5h… We had about 400km to go but we would stop in between and take the opportunity to see if we could find gluten-free restaurants in El Djem. You can watch the video of the trip here or by clicking on the image below. 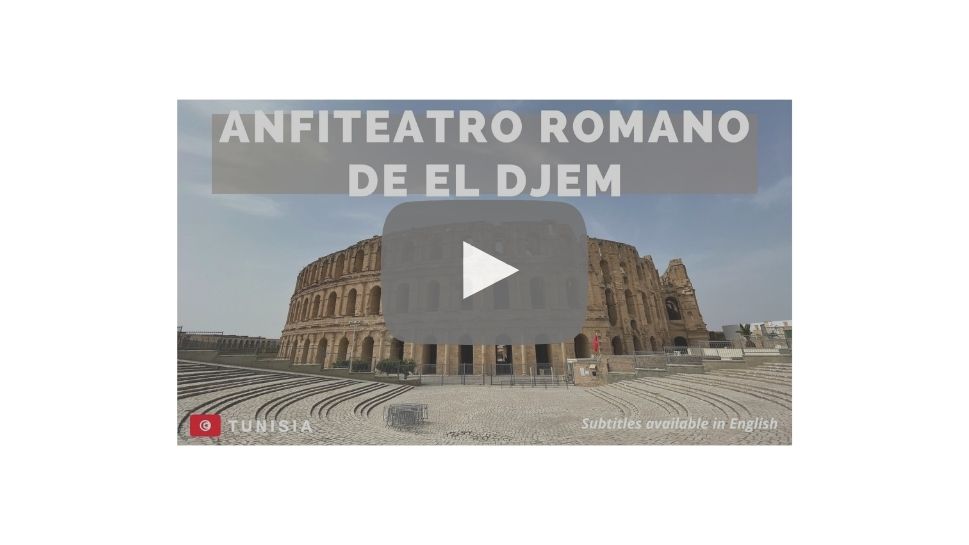 The drive from Douz to El Djem was quite pleasant. We stopped at a service area to rest and while we were driving we were talking through the radio. It is interesting to see how the groups evolve. The change from the first day, when no one knows each other and speaks little, to 5-6 days of travel together is very big.

The organization of Territori 4×4 told us that near the amphitheater we would find places to eat. Obviously, the issue of gluten-free would be a big unknown… 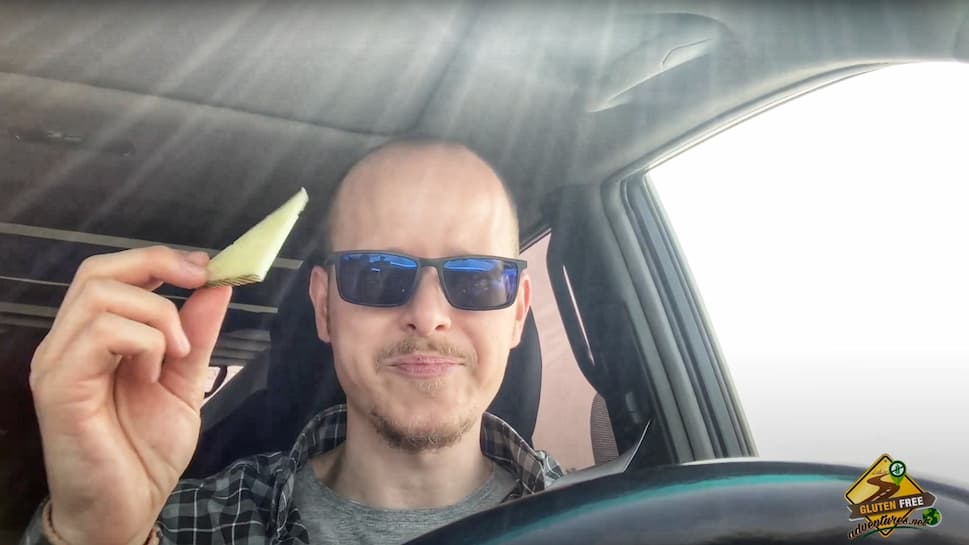 With this in mind, we took the opportunity to have a snack in the car. We still had some cold cuts and cheese left and while the car ate the km, Isa and I ate the sausage and crackers we were carrying.

Arriving in El Djem was a lot of fun, as the city changed radically from the moment we entered until we reached the amphitheater. The streets were getting narrower and narrower and more crowded. 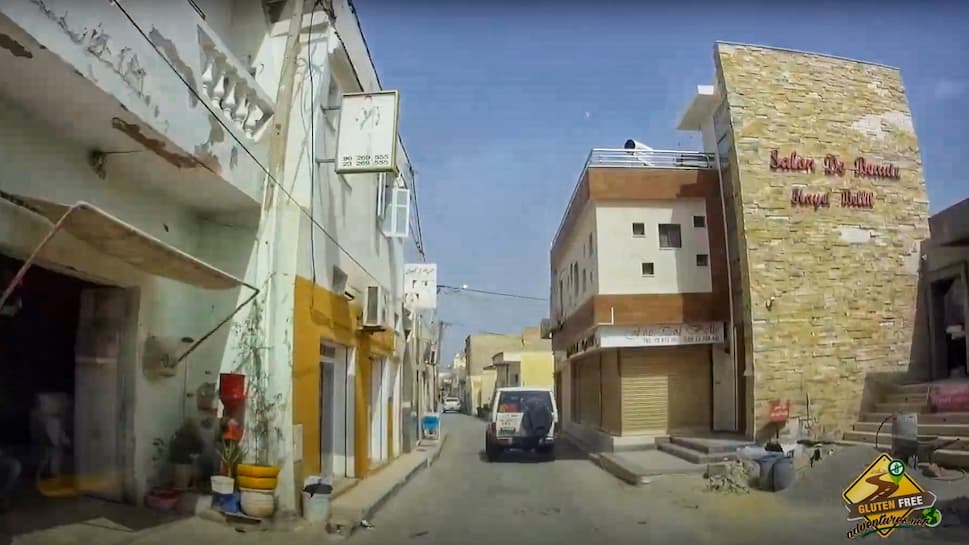 After a slightly tense situation with a bar owner who offered us to park the car in the middle of his terrace (this is literal), we met the group in front of the amphitheater. Some (those who had already been there) sat in a restaurant where they already knew them (I guess they knew them after so many times they had been there). The rest of us scattered. Some went for a walk in the surrounding area. Others stayed admiring the amphitheater. We decided to go inside to visit this monumental building. First, however, we would say goodbye to my father. He had to continue his trip to the port to board the ferry to Rome.

The amphitheater of El Djem was one of the most important entertainment centers of the city of Thysdrus, one of the Roman provinces of North Africa. This amphitheater is the largest in Africa and one of the best preserved in the world. It was built in 238 A.D. and could accommodate about 35,000 spectators! Impressive, right!? 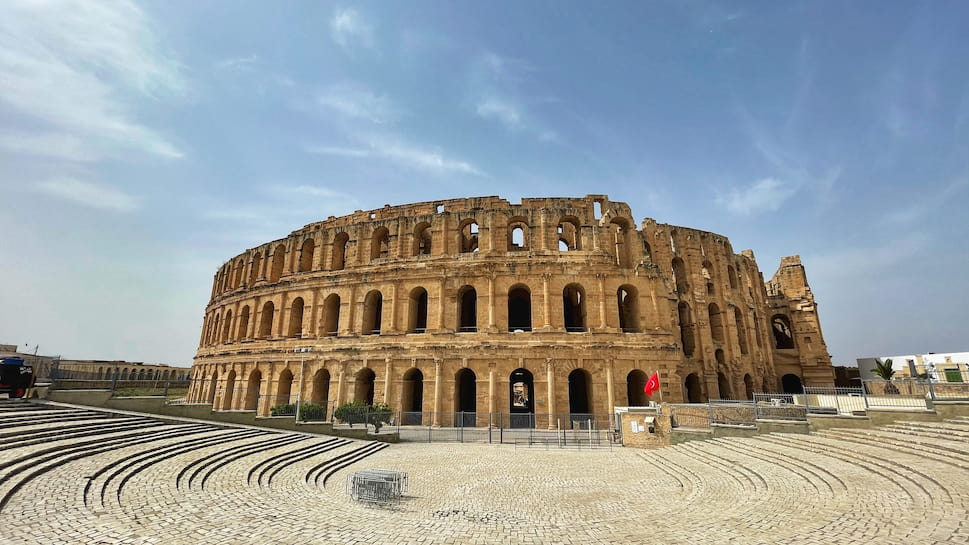 Walking around there made you feel like you were in the “Gladiator” movie. I cannot even imagine how many lives had been taken in there… as I explain in the video of the trip, this building is also known as the Ksar of the Kahena. This Berber princess fought the Muslims in the 7th century and was killed by her lover, who stabbed her and sent her head to the leader of the Arab army. You see how they do it! You have to watch who you love… In 1974 this monumental building was declared a World Heritage Site by Unesco. 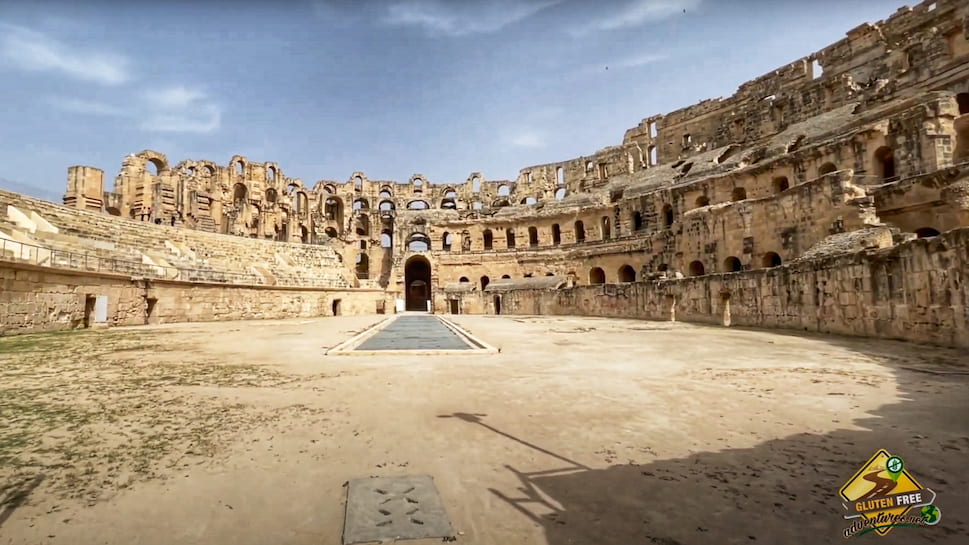 When we left the amphitheater, we met up with the rest of the group. They were still at the restaurant I told you about at the beginning. We sat down with them and saw that some of them were eating grilled lamb. It looked good. Besides, it was served with salad. We gossiped a bit about the restaurant and did not think there was any risk of cross-contamination. But! When we were about to order a plate of lamb, we saw that in the same grill where they were cooking it, they had just put three fish. I couldn’t order it anymore!

When you travel with allergies and intolerances you always have to be alert. In this blog I mostly share my experience traveling gluten-free but, as I have told you in other posts, I am also allergic to fish (among other things). Fish allergy is worse than celiac disease, because if I eat fish, I can have an anaphylactic shock. I assure you that El Djem is not the place I would like to have it… in fact, I don’t want to have it anywhere!

So, well, we didn’t order anything, and we waited until we got to the hotel to continue eating. 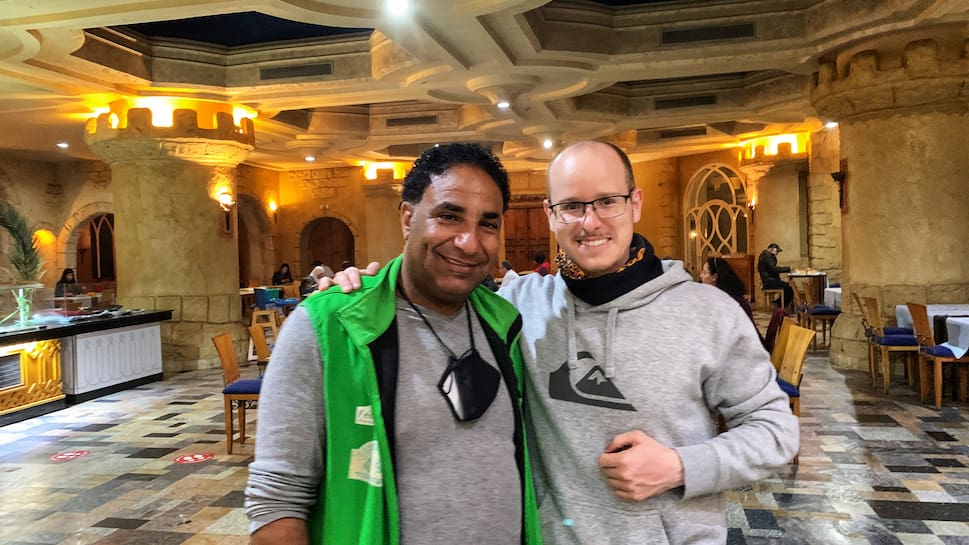 The traffic to get out of El Djem was really chaotic. It was difficult to know which direction some streets were going, as there were cars in both directions on either side. These things are part of the adventure!

It didn’t take us long to get to the Vinci Lella Vaya hotel in Hammamet. This time we could actually enjoy it a bit more because, unlike the first time we slept there, we had arrived at a normal time haha. The first night in Tunis we had arrived at 2am. 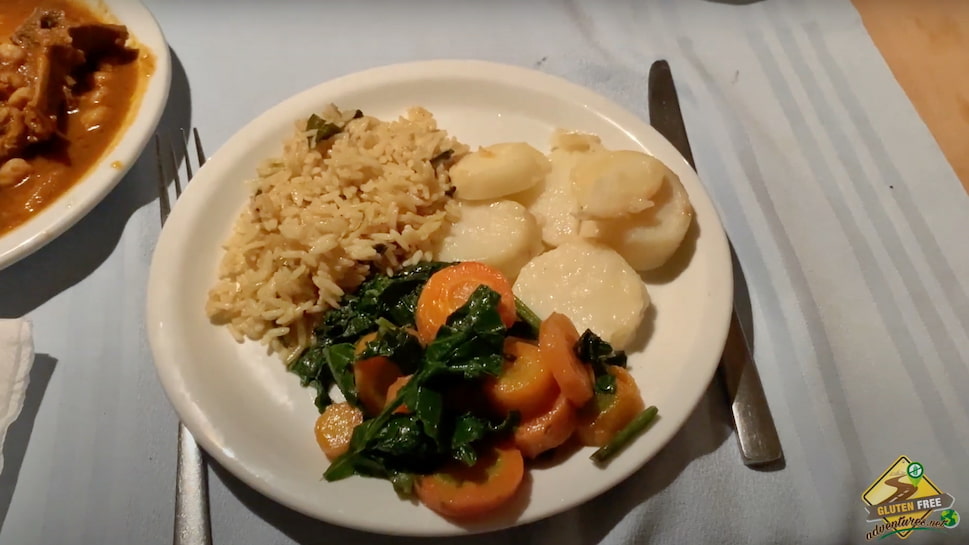 Since the departure of the ferry had been delayed, we would be there for two nights. great! It’s always hard to accept that trips like this end. One more night was a gift of fate!

This time a dish of boiled potatoes, carrots, spinach with rice and stewed chicken.

The next day we would go to visit Sidi Bou Said and the Medina of Hammamet. The adventure was not over yet! 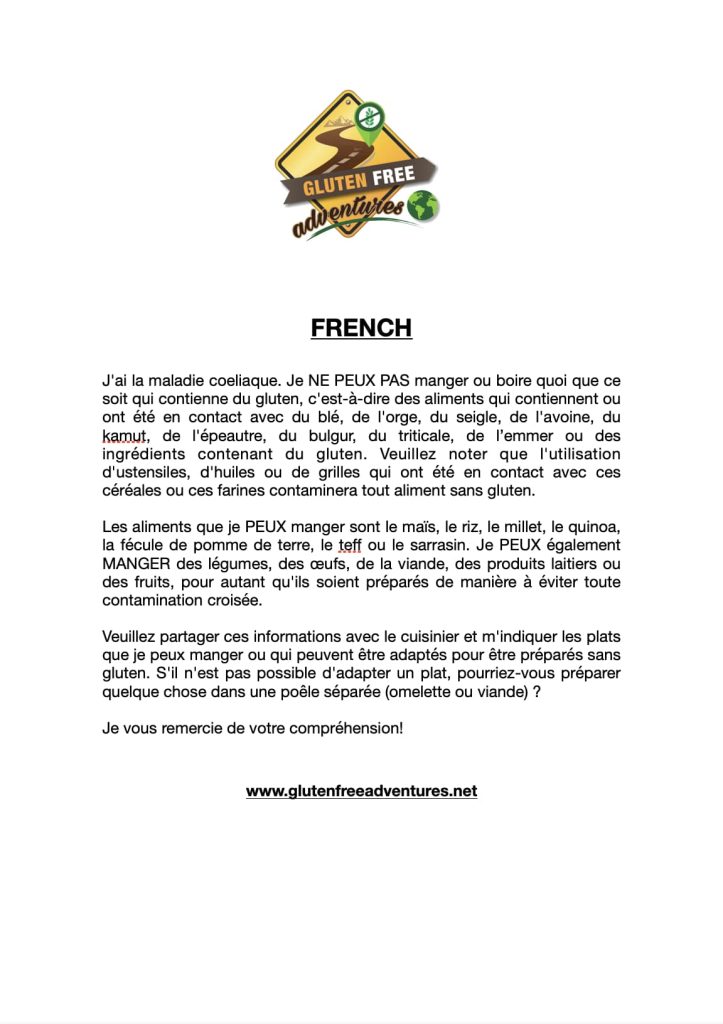 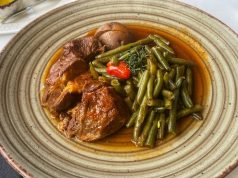