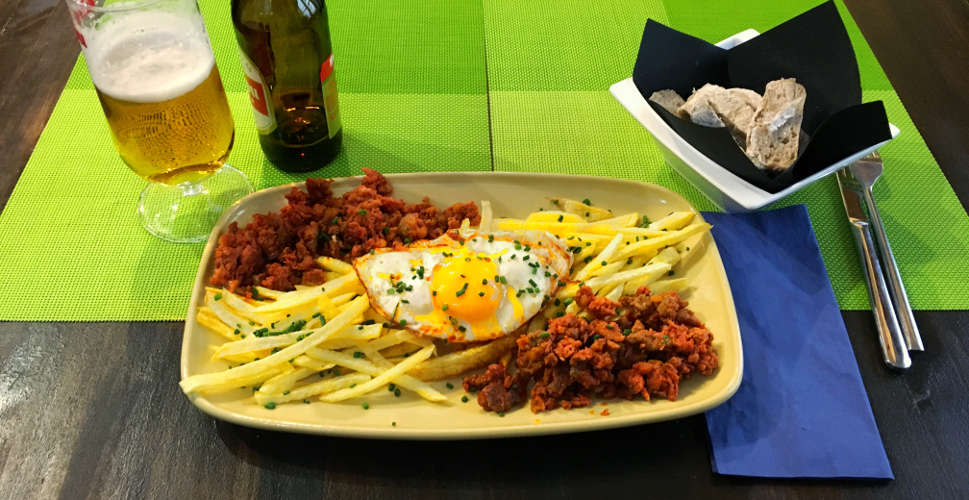 What is promised is debt! Still in Murcia, I got up a little earlier to go to La Casa Del Celíaco for breakfast. The day before, Mari had told me how rich the bread was. As a good eater that I am, I could not leave Murcia without tasting that gluten free bread.

In effect, Mari was not lying. The bread was delicious! Freshly baked, it was the way I like it: crispy on the outside and tender on the inside. Taking advantage of the fact that it was still hot, I spread the butter so that it melted a little. I accompanied the toast with jam and a desert flower tea. We started the day very well! 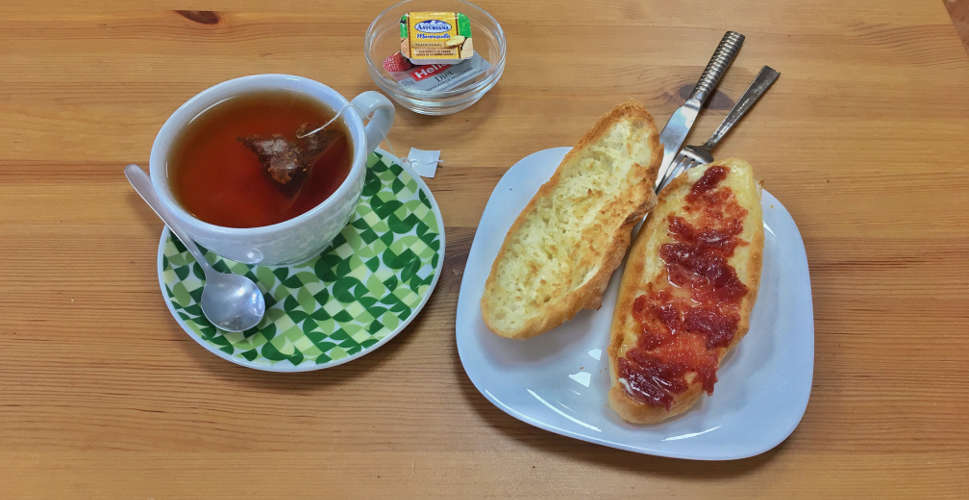 After a while, I met the Bla Bla Car people to go to Granada. The expected arrival time was around 2pm and I had a plan that would not be fulfilled 100%… again! Upon arrival, I would go to a tapas bar near the hotel and dine at the El Trasgu Restaurant Cider House. The next day, I would have breakfast at the M. Isla Pastry Shop, I would eat at El Quinteto and I would have dinner at Aparicios.

We arrived a little later than expected and, after leaving the Bla Bla Car people in the agreed place, I went to the hotel. It was very central and I had to drive through really narrow streets until I got there. Once installed, I left the car in the parking lot I had reserved and went to get lunch. It was already 4 o’clock in the afternoon…

Weather was horrible… it was raining and it was very cold and windy… I’ll have to come back in summer! From the hotel I had called to the Restaurant El Trasgu restaurant in Campo del Príncipe 12 to reserve a table and report my allergies and intolerances. At that time I was the only guest. When they arrived, they treated me great. I was seated at a fairly large table so that I was comfortable and they brought me the menu with an appetizer of hummus with gluten-free bread without having to remind them that I am celiac.

I was really hungry and the appetizer felt great. It was very helpful to calm my stomach while deciding what I would order to eat. I wanted something typical! And this time, I would forget the tapas and ask for a ration. 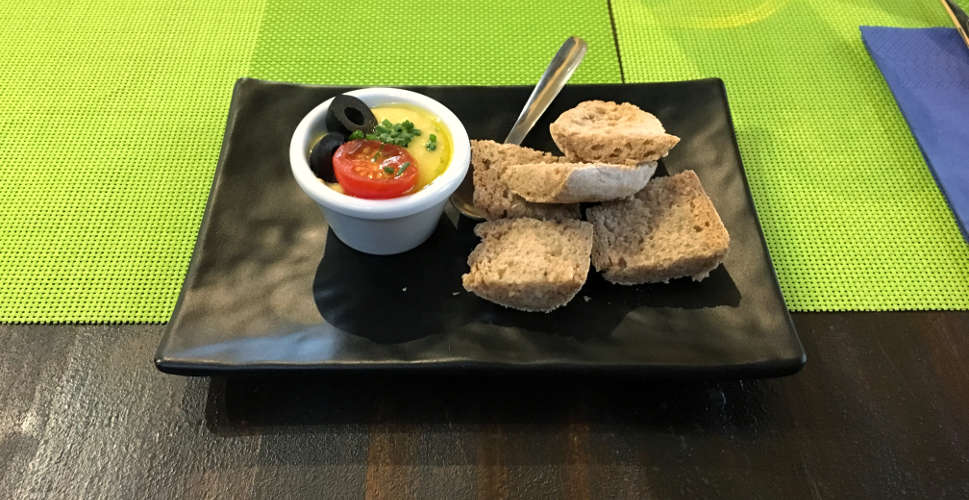 Due to the bad weather, they had dismantled the terrace, so I could only see how it was inside. There were few tables and I am convinced that it is always full, especially in summer on the terrace. I recommend you book in advance. In addition, it is at the foot of the climb to the Alhambra, so it can be a good option to stop to refill energy before undertaking the walk.

The gluten-free dishes on the menu were very well indicated. This, coupled with the waiter’s help when I asked for recommendations, made it very easy to choose.

I ordered a “wild boar hash with potatoes and fried egg”. The minced wild boar carries paprika and spices and is, as the name suggests, minced boar meat. It’s like a chorizo without the outer skin, which makes it very easy to eat and mix it with the egg and the fried potatoes. It tasted great! You should see me when I write the posts, describing the dishes I have eaten. My mouth water only when I remember them. The hand cut potatoes were very rich too. I really enjoyed eating that dish!

One mistake I made was forgetting that I was in a cider house… instead of cider, I ordered a gluten-free beer to accompany the food… 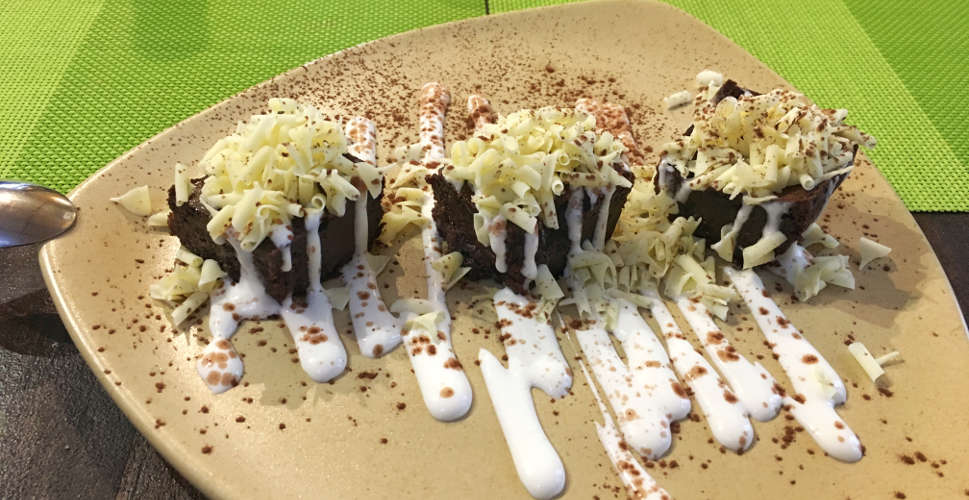 As often happens to me every time I enjoy food so much, I wanted chocolate for dessert! I think it was the best chocolate coulant I’ve ever eaten… split into three pieces, they brought it covered in white chocolate chips, bathed in liquid cream and with a little cocoa sprinkled on top.

I left there with the satisfaction recorded on my face… I had had a great time! Of course… I had eaten a lot and the only thing I wanted was to return to the hotel to rest. I would need the whole afternoon to do the digestion… Besides, the bad weather only invited us to go to a covered and warm place. I arrived at the hotel around 6 in the afternoon and, after watching a movie, I fell asleep until the early morning of the next day.

As expected, the next day I got up starving. Before the Free Tour to which I had signed up, I went to take breakfast at the Pastelería M. Isla de la Calle Músico Vicente Zarzo 3.

I had contacted them through their Facebook page to ask about the gluten free “Piononos de Santa Fe”, a small cake made in Santa Fe, a town very close to Granada, created in the mid-nineteenth century, in honor of Pope Pius IX . The name comes from the Italian “Pio Nono”.

In addition to these traditional pastries from the region, you will also find gluten free biscuits, ice creams and artisanal gluten free breads. Everything delicious! 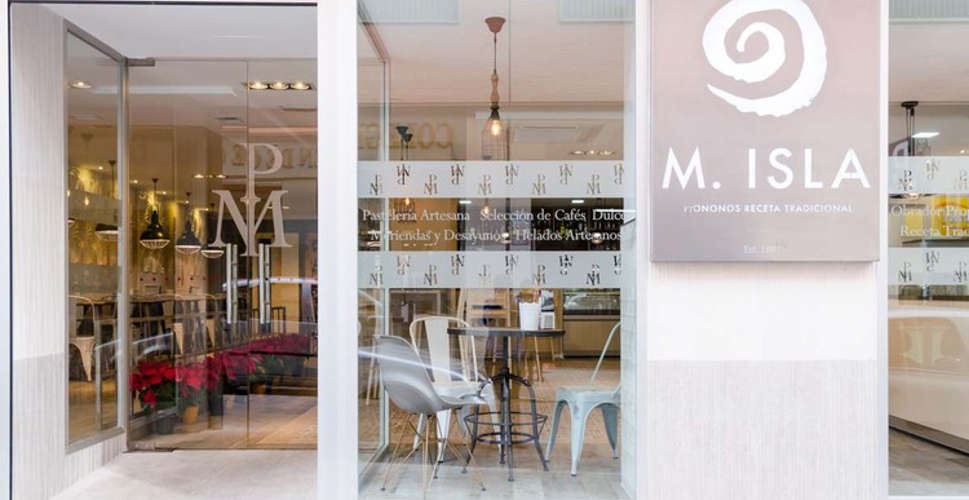 The place is very nice and decorated in a very bright and modern wqay. With two rather large refrigerators, one of them only for gluten-free products, they have a fairly wide offer. For what the girl who attended me explained, they started to prepare gluten-free products in their house, so that a friend of the sister could eat them. Then they grew until they decided to start the business.

I was hungry and I should have eaten too many piononos to satisfy my stomach. I decided to start with some toast and order the pionono as dessert. A dessert is always good, even if it’s for breakfast! 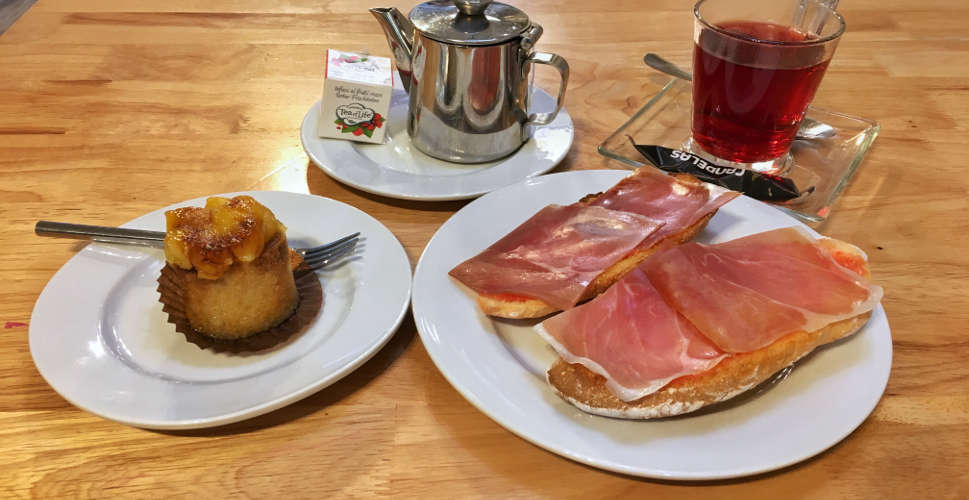 I ordered the bagel halved with a bit of tomato spread and ham. When I gave him the first bite I was shocked! The bread was really delicious. It was one of those breads that is worth eating without anything. Only bread! Also, it was a little floured and you messed up your fingers when eating it. I liked it so much that I repeated. When I ordered the second one, I asked that they bring it with the gluten free pionono.

They told me that the bread was not made by them, that they brought it in packs of 10 from Baza, a town nearby. They also sell frozen 10 unit bread packages to take home. 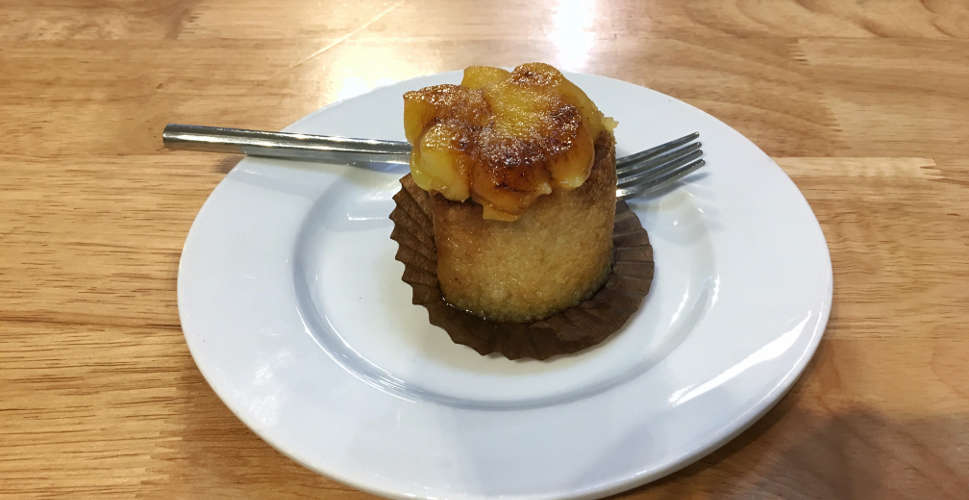 Finally! The time to eat the gluten free Pionono de Santa Fe had come! In the fridges they had Piononos de Santa Fe with and without gluten. They differentiate them with the color of the bowl. The Pionono is a cylindrical sweet bun cake with a sugar-cream pate dipped in syrup. Delicious too!

The Pionono de Santa Fe without gluten was the perfect dessert for that super breakfast that I had just eaten. Now I was ready to go to the Free Tour and endure the cold and wind of Granada in winter.