Heidelberg: gluten free restaurants and supermarkets at the near the castle

There we go! The second day of our trip! We had already visited Dijon (France) and we had survived to the first 800km from Sabadell without problems. Although the day before we woke up at 4.50pm and after almost 12h of a car, we walked almost 7km through the city – just as an anecdote, Isabel wore a bracelet of those that indicate the distance and, soon, walking more than 10,000 steps everyday became another goal. The second day of travel we also got up early.

This time we got up at 7.15am to leave from Heidelberg. We had 435km ahead and, although on some sections of the German motorways, there is no speed limit, it would not have helped us, since most motorways were under construction and full of traffic jams. We wanted to arrive before lunch to leave everything in the hotel and go take a walk before eating. Unfortunately, it was not like that, as the queues and the works on the road did not allow us to arrive earlier than 1pm. In fact, we did not even see the sign of entry to Germany… a pity because we wanted to photograph the sign of each country we passed through! 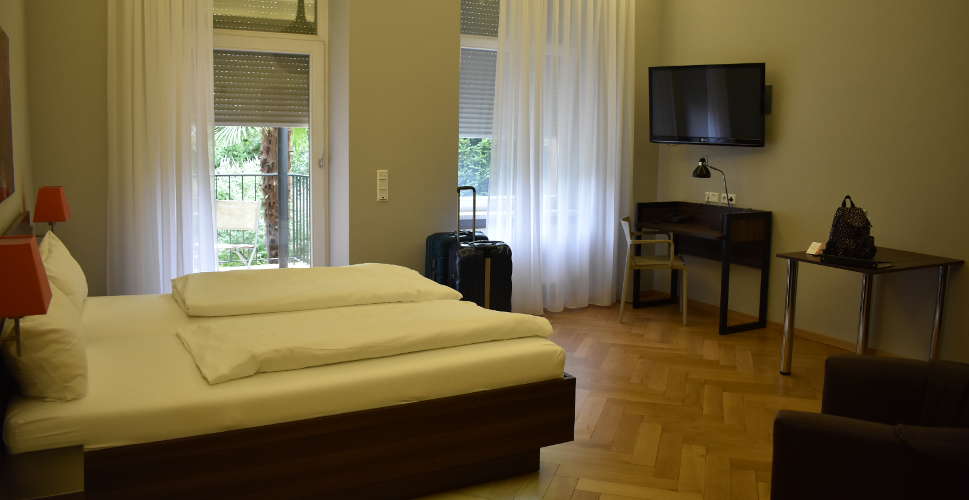 We were a bit worried, because during the whole trip, the weather forecast was awful. Actually, the rain only gave us a truce while we were visiting Prague. Even so, weather is part of the adventure, so we did not care much.

As soon as we arrived, we could enter the apartment at the Boarding House in Heidelberg, a hotel that has rooms and apartments spread over three buildings on Rohrbacher Street. As it was late, heavily raining and we were hungry, we decided to cook our lunch. The room was really good. A huge bed made from two individual mattresses with their respective quilt – very typical of this area – a huge bathroom and a small terrace with views to some neighboring gardens.

We prepared some sausages and tenderloin steaks with a tin of Heinz beans with tomato (the typical English breakfast) and went straight to the city.

We could have gone to one of the gluten-free restaurants in Heidelberg, but the closest ones were more than 20 minutes away and, to be in Germany, we were already a little late. Also, raining so much we did not want to go for a walk. In case you want to eat gluten free in Heidelberg, you will find these options:

IMPORTANT NOTE: make sure they know how to prepare gluten-free food. In Germany it is known that in some restaurants, they do not control cross contamination well.

In case you you rent an apartment or want to do gluten free shopping in Heidelberg, just before you get to Bismarckplatz from Rohrbacherstrasse, there is a DM Drogerie and a Rewe. In DM you will surely find gluten free products. In Rewe, they usually have a private label range of gluten-free products. There is another DM in Bismackplatz and the Vita Nova Reformhaus store is halfway down the Hauptstrasse, towards the river.

Luckily, the bad weather was giving us truces and we could go for a walk. From Boarding House we had about 15 minutes to Bismarckplatz, which is where the beautiful area of the city began. Once you get to the square, follow Hauptstrasse to Marktplatz, where you will find one of the most beautiful churches in the city. The square itself is also very beautiful. Along the way you have other interesting monuments and buildings that are worth seeing too.

Upon entering this street, you will find a map indicating all these spots. As you will see, everything is quite close. 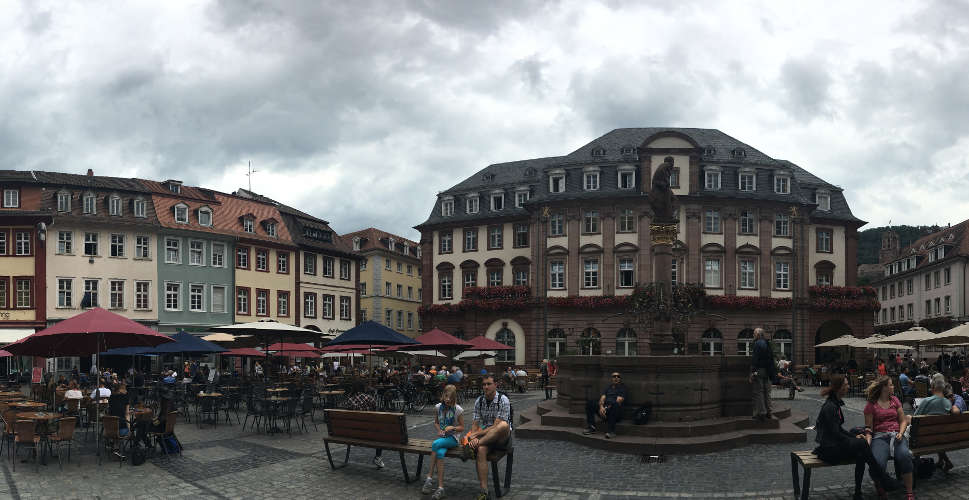 When we arrived at the Marktplatz, we spent there a long time looking at all the buildings, also very old. The main tourist attractions are concentrated in the Alstadt or Old Town: the Bridge and the famous Charles Theodore gate, the University, the Heidelberg Palace and the Hauptstrasse. If you like to explore, this street will enchant you! Beyond its own charm, it connects with other small but even more interesting streets that invite you to get lost in order to discover more cafes, bars, squares, houses and fountains.

From the Marktplatz, we descended towards the river. Sweet memories came up to my mind! Seven years ago I had been there, alone, in one of my stops of my road trip from Sabadell to Helsinki (Finland), where I went to live for a year. This was my first great adventure! I will write about it later on. 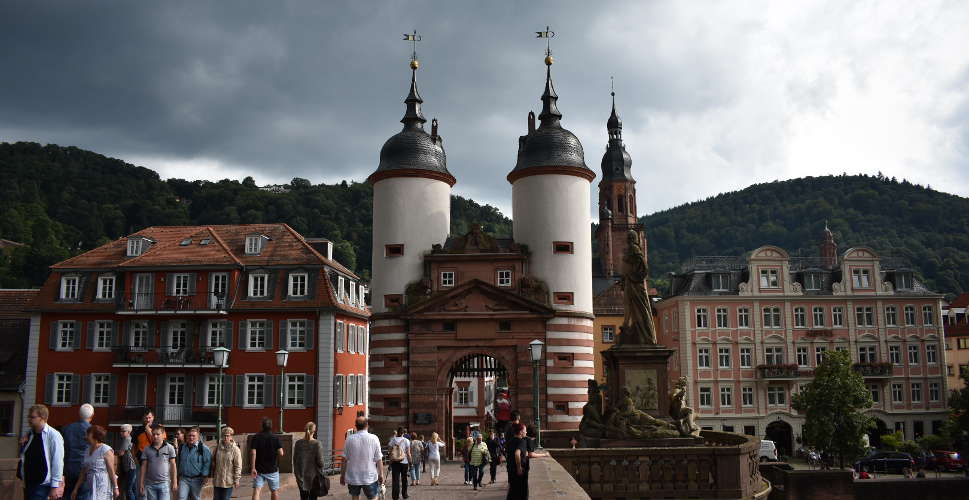 When you visit such old cities, especially in summer, it is often difficult to see everything because of the number of people there. Luckily, since they eat so early, the streets tend to be empty sooner than in Spain.

After admiring the Gate of Karl Theodor and crossing the bridge while walking away from the historic center, we decided to go down to the riverbank to sit down for a while and have a snack. 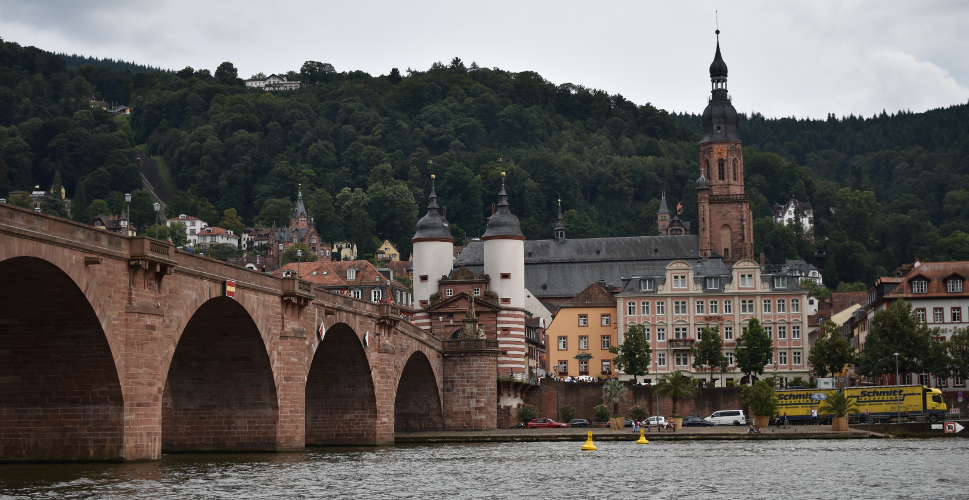 Suddenly, it was late again! Too late for visiting the Castle, as it closed at 6pm. Another disadvantage of these countries is that everything closes too early! But well, we contented ourselves by taking a photo from the bridge and then taking another walk through these interesting streets until we reached the University Square. We sat there until dinner time.

The rest of the afternoon flew by while we chatted and watched the people and groups of tourists, especially Japanese, visiting the city. Also, even if it was August, we could also see some students walking in and out from the University.

We did not realize the time until the rain invited us to leave the bench. We decided to go back to the apartment to have a quick dinner – an omelet with Iberian ham – to go back out to see the city illuminated in the night. Above all, we wanted to see the bridge at night and walk through the streets of the historic center without so many people.

The next day, we had a short trip (only 160km) to reach Rothenburg ob der Tauber.