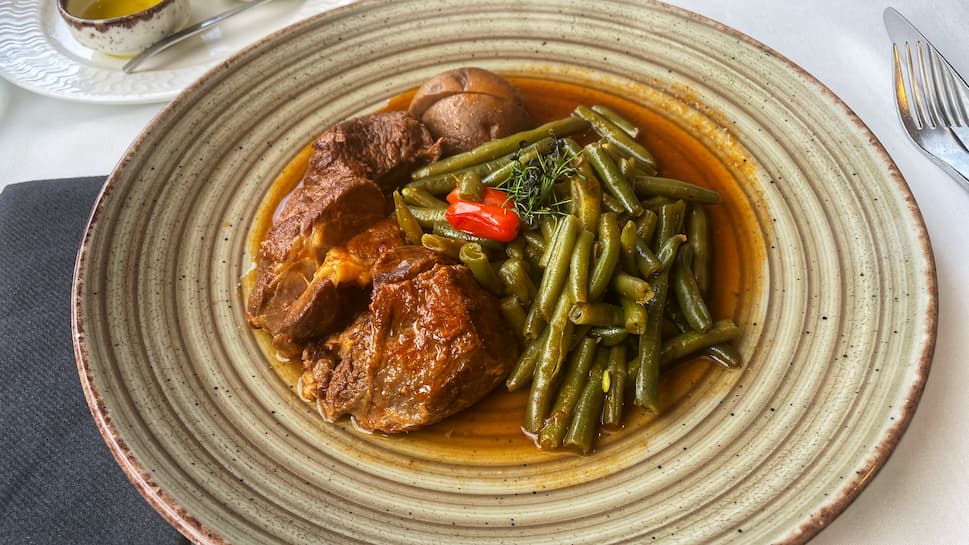 Litochoro: I hitchhike for the first time in my life to get to the restaurant on time.

After a week of traveling around Greece visiting clients around Athens and Thessaloniki, finally, I could enjoy my trip in a different way – I was a tourist again! It was the first work trip after splitting with Isa and this time I took the opportunity to stay the weekend there. That day Nikos had planned a little tour for me. We would go to visit the Royal Tobs Tombs in Aiagai and then to a monastery at the base of Mount Olympus. Then we would go to discover one of the gluten free restaurants in Litochoro. You can watch the video of the trip here or by clicking on the image below: 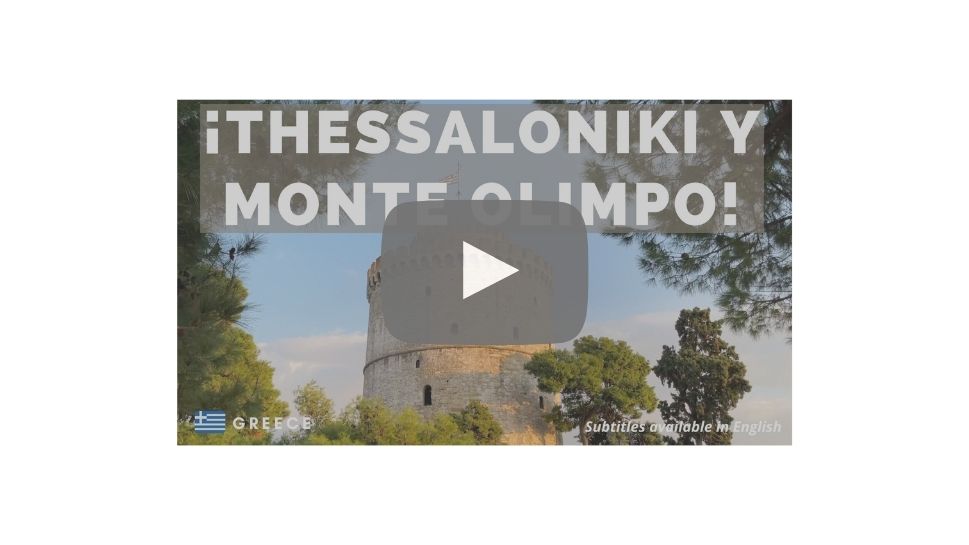 That day I was able to sleep a bit more. I had arranged to meet Nikos around 10 am. We wanted to rest. Especially after having gone to sleep late the night before, as we had gone for a drink at Le Cercle de Salonique, a very cool bar!

We left Thessaloniki and headed for the holy mountain – Mount Olympus! Zeus lived up there! I was very excited. In fact, in the car, Nikos gave me a master class on all the gods. The premier league ones and the second league ones… These Greeks had a lot of gods! 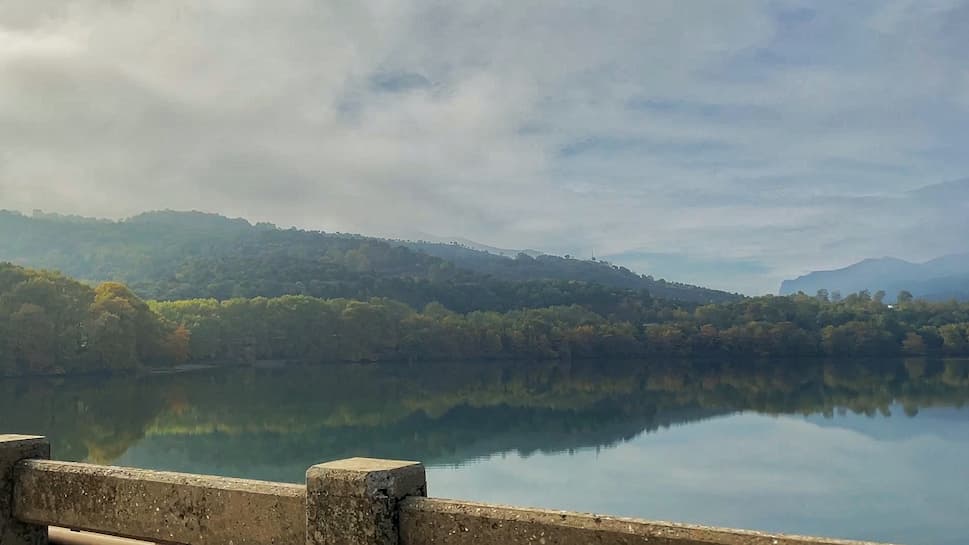 It was a splendid day! We arrived at the museum of the tombs around 11 am. Nikos had explained to me that we were going to see the tomb of Philip II, the father of Alexander the Great! Next to the tomb of Tutankhamun, this is one of the greatest treasures of antiquity ever found. The tomb dates back to the 4th century BC.

Something I really liked was that the tomb itself had been converted into a museum. You could not enter inside the tomb, but the museum was on the site of the tomb. Next to it, they also found the tomb of another prince. 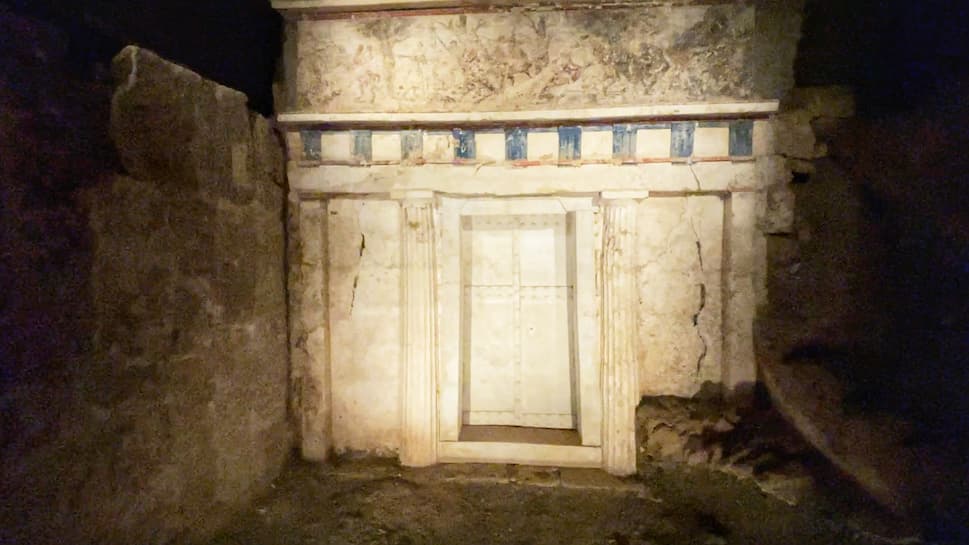 It was very interesting to see all the jewels, vases, weapons, furniture, and other decorative elements. All displayed just as they had been found at the original site. There were also scale reproductions of the tomb and its different rooms.

We had a very funny moment because Nikos understands ancient Greek and was able to read what was written on the stones that were on display. This made him feel a bit old!

From there, we set off in the direction of Mount Olympus. The views from the road are very beautiful. Painted with the reds and yellows of autumn, it was even prettier to see. We crossed Litochoro to go up that little road that would take us to the base of the mountain. There is a parking lot with a restaurant there.

When we arrived, the parking lot was completely full, and we had to park on the side of the road. From there, we started walking down a path that followed the river. 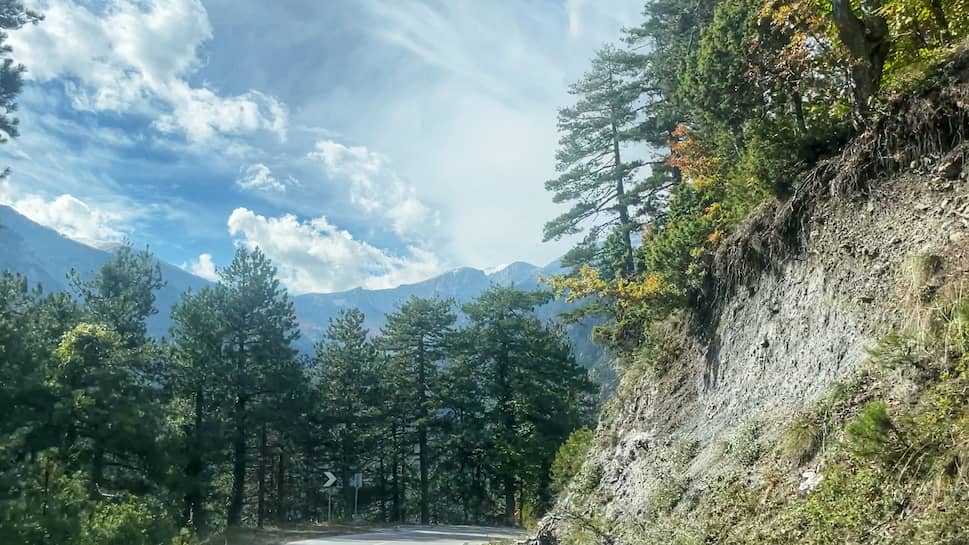 It was a fairly closed forest, and everything was quite wet. The ground with a blanket of red leaves. The hike was going very easy. It was all downhill. As we went on, I was thinking that the way back would be harder. Especially since we would be hungry.

After a while, we came to some small waterfalls. We crossed the river over a wooden bridge and continued walking. Our goal was to get to the Sacred Cave of San Dionisio and then go see the Monastery. 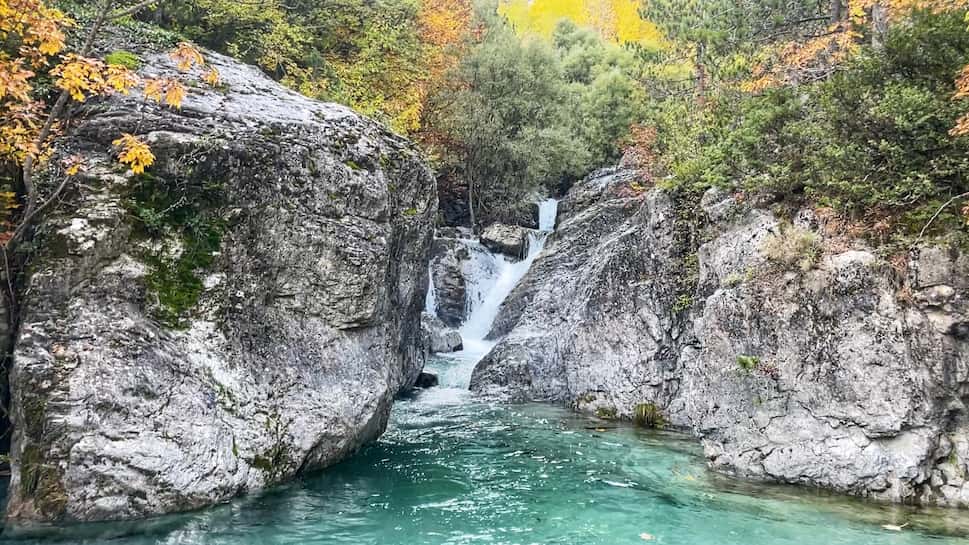 At dinner the day before we had had another very funny moment.  It turns out that in Greece it is common to find wild turtles in the forest, I had no idea! In Spain I have never seen a wild turtle. I have always seen them as pets at neighbors’ or friends’ houses… Have you seen any in the forest?  I was always looking around to see if I saw a turtle… we didn’t see any! Anyway…

In the cave, there is a small building next to the spring. I understood that this cave was where San Dionisio had lived for many years. It was full of images and candles left by the believers. 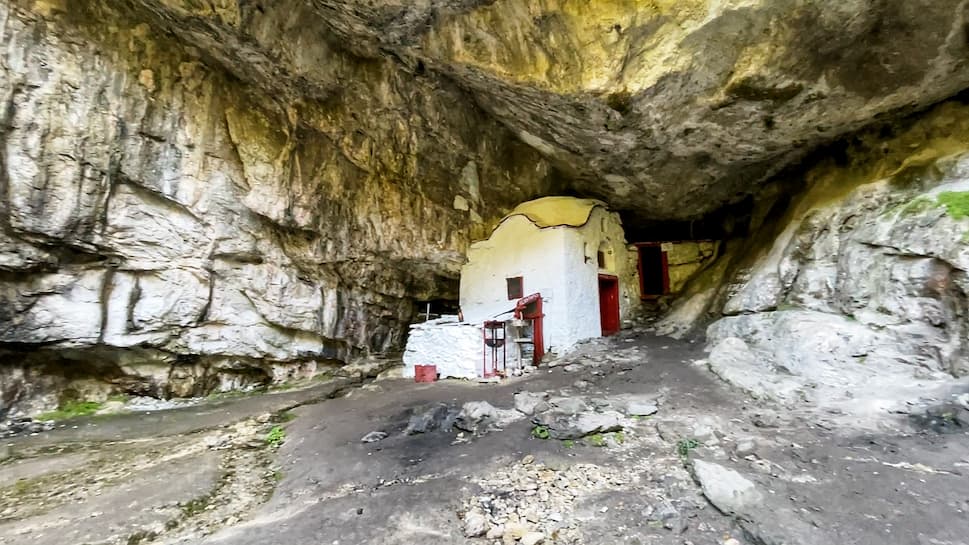 It was getting late, and we still had to see the monastery. We spent some time in the cave, contemplating the forest from there. It was very beautiful! The soundtrack of the water coming out of the spring completed the picture.

After 30-40 minutes we arrived at the monastery. It was under construction, and we decided not to enter. It was already 3 o’clock in the afternoon and we were hungry. The problem was that we still had 3 hours to walk to the car… 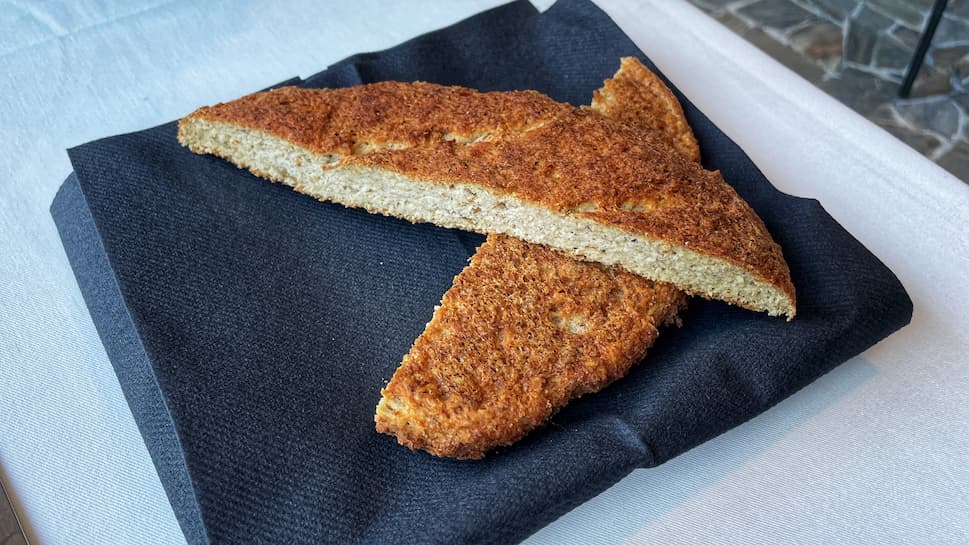 Again… Big problems, big solutions! When we got to the road we started looking for a car to stop. Without hesitation, Nikos asked some Germans if they could drive us up to the parking lot at the base of Mount Olympus. They saved us! We arrived at the top in about 15 minutes.

After thanking them countless times, we got in our car to drive back to town. Nikos had looked for gluten-free restaurants in Litochoro and had found this one: Gastrodromio at Agiou Nikolaou 36. He had called them, and they had told him there would be no problem. Just in case, I carried the gluten-free travel card in Greek but didn’t use it.

They had gluten free bread made by them with almond flour, I tried it! It was a pretty flat bread because it looked like they hadn’t used yeast. It was very tasty. The taste was a bit like of sponge cake, but it was of great service to eat what we ordered.

We shared a Greek salad and some pork strips with vegetables. Another typical Greek dish. Then I had lamb with beans – all very tasty! A nice reward after the walk we had taken. 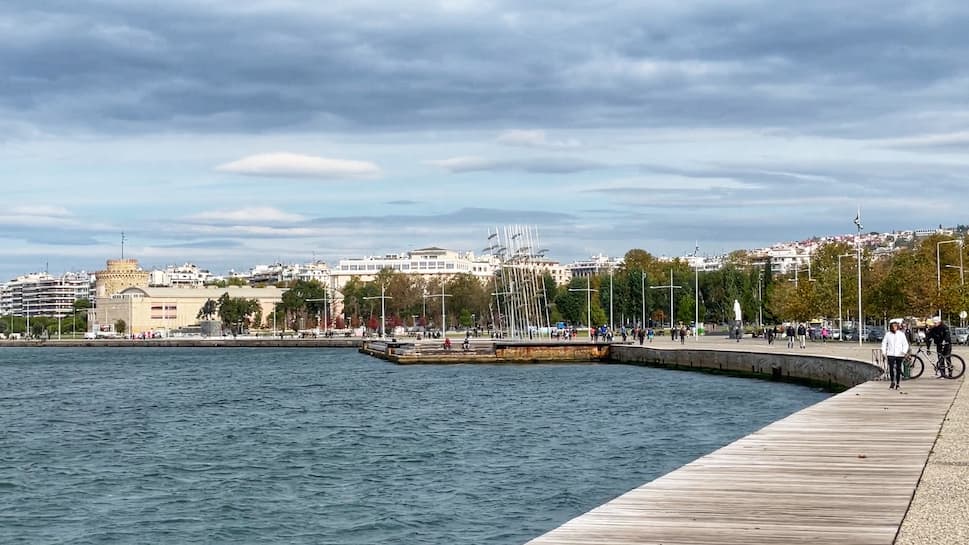 After lunch, we returned quietly to Thessaloniki. Nikos dropped me off at the hotel and we arranged to meet later at another bar-restaurant called Casablanca. We were going to a party organized by a friend of his wife who had just returned from a retreat on one of the islands. I couldn’t eat anything there, but it was OK. When I got back to the hotel, I had a couple of cookies and… problem solved! 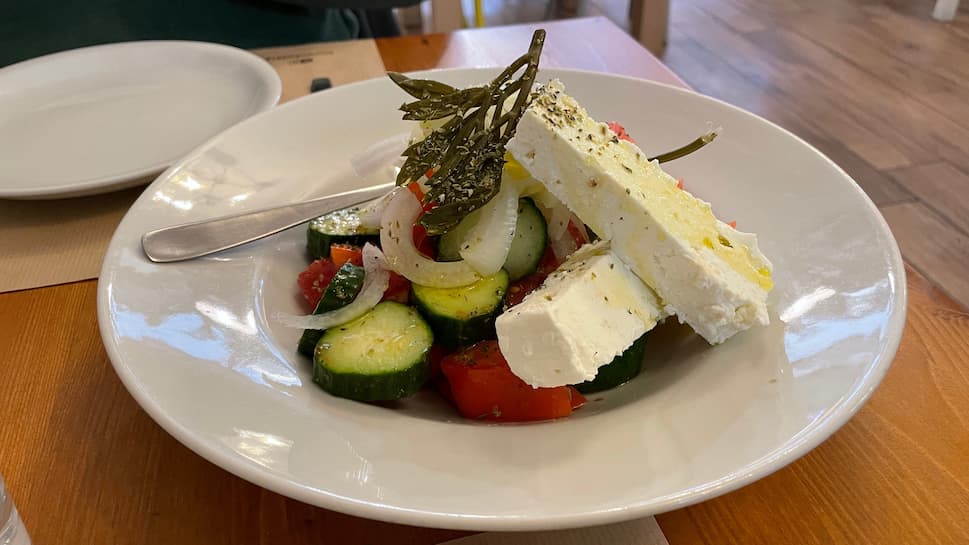 The next day I was supposed to fly back in Spain. Nikos had obligations and we could not see each other during the morning. I took the opportunity to sleep till late, pack my suitcase and walk along the promenade of Thessaloniki. I went to see again the White Tower, the statue of Alexander the Great and the umbrellas of Zongopoulos.

Nikos arrived at lunchtime and took me to one of the old areas of Thessaloniki. That was where his grandfather lived and he had spent a lot of time there as a child.

As for gluten-free restaurants in Thessaloniki, we improvised that day. We walked into one that Nikos knew more or less well and asked if they could prepare something gluten-free for sure. The name of the restaurant was Sourtouko, at Likourgou 3. Since we were the first and the kitchen was clean, they said it would be no problem.

I had a plane to catch, so I tried not to take unnecessary risks. I ordered a Greek salad and grilled lamb with baked potatoes.

Again, we were treated to dessert – a typical Thessaloniki dessert! Candied orange – it was delicious! 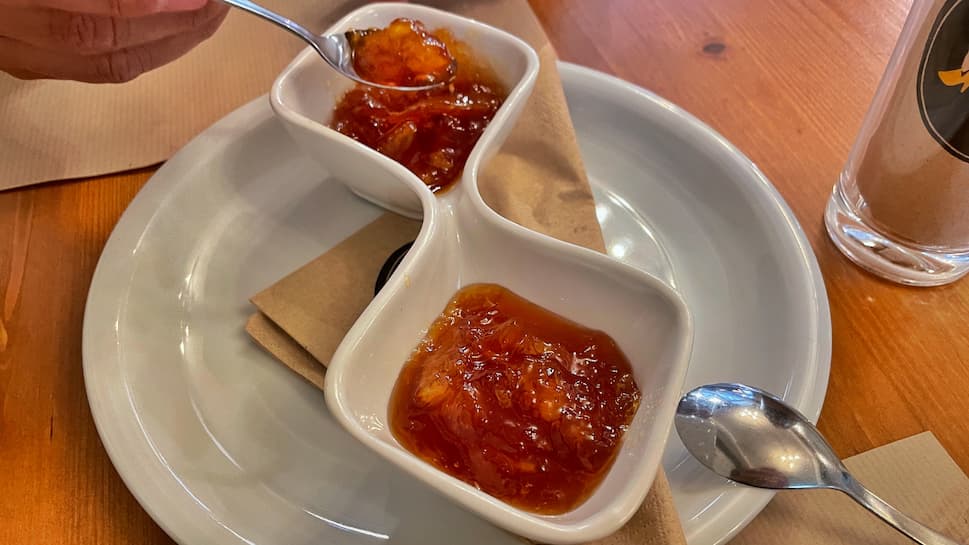 But the trip didn’t end there! I would have to stay one more day in Thessaloniki… When I arrived at the airport, I was told that I could not fly because there was overbooking. They had no seat available for me… great! They sent me to a hotel near the airport where they probably had never heard the words “gluten free” before.

Not a problem…I took the opportunity to call a cab and head back to downtown Thessaloniki. It was an excellent opportunity to eat again at the best restaurant of the trip: “The Three Little Pigs“! 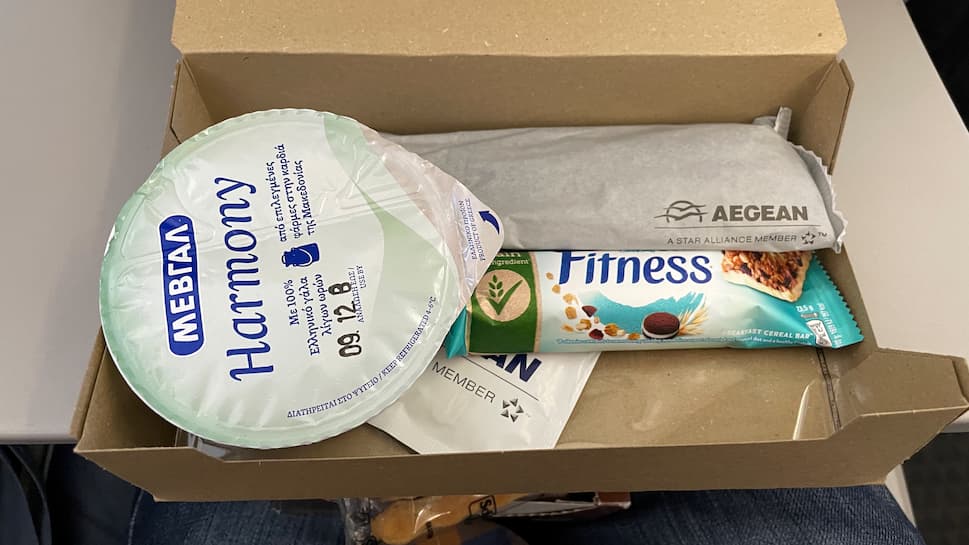 The next day, at 4 am the taxi came to pick me up to get back to the airport. We had to fly from Thessaloniki to Athens. From there, it was back to Spain. This time on the return flight with Aegean Airlines there was something gluten-free that I could eat: the yogurt!

AND HERE WE LEAVE THE CELIAC TRAVEL CARD IN GREEK: 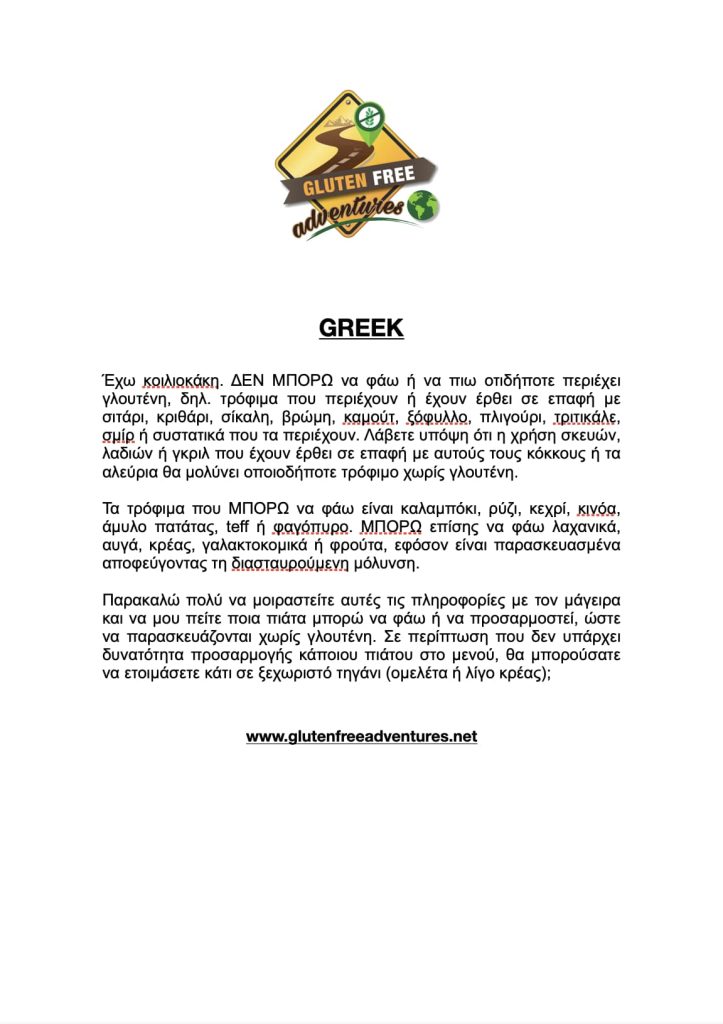