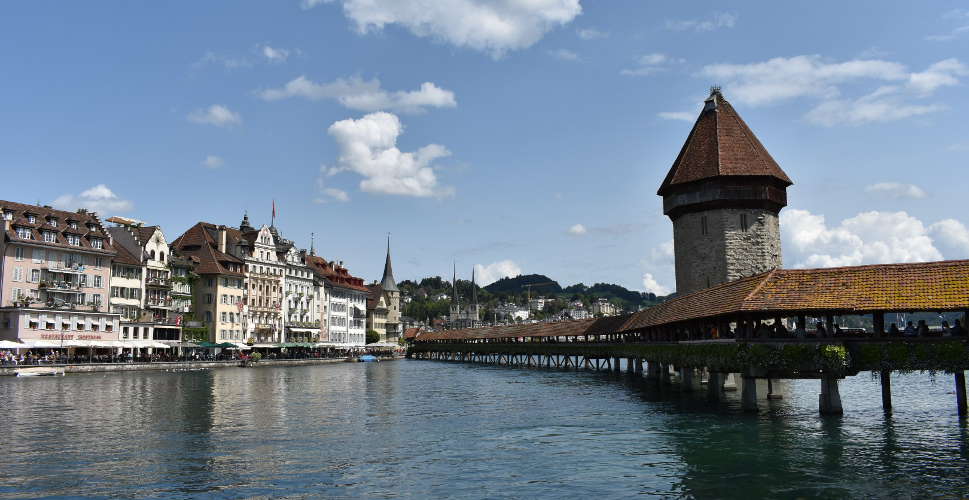 Lucerne, Zurich, Brunnen and Schwyz: gluten-free restaurants on the lake of the four cantons

We were already in the last country of the trip: Switzerland! After having passed through France, Germany, the Czech Republic and Austria stopping at Dijon, Heidelberg, Rothenburg ob der Tauber, Munich, Neuschwanstein, Prague, Hallstatt and Gosau and Innsbruck, we were now heading towards Schwyz, a very small town in the canton with the same name. Also four hours from Innsbruck, we planned to spend two nights in the apartment we rented in a house on the outskirts of the town. The next day we wanted to visit Lucerne. That was the plan!

IMPORTANT: same than in Czech Republic and Austria, you must buy a vignette for Switzerland. It costs 35€ and is valid for the whole year. A priori, it may seem very expensive but, taking into account that, for example, driving from Barcelona to Valencia costs 38.20€ only for tolls, paying 35€ for the whole year to be able to drive on any road… it’s a bargain! 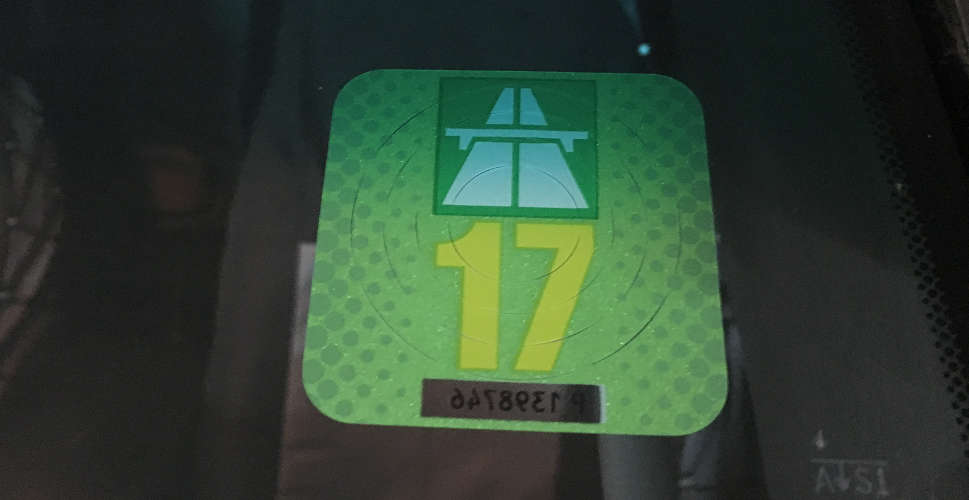 We entered Switzerland with rain again… it seemed that our luck was over, but as in Switzerland you can have all types of weather in the same day, we did not worry too much. Also, for that day, we only planned to rest.

As soon as we got to the apartment house, we were welcomed by the owners’ son. His parents weren’t there. The 5-year-old boy was in charge of showing us the house and explaining how the blinds and lights worked. We were really surprised! 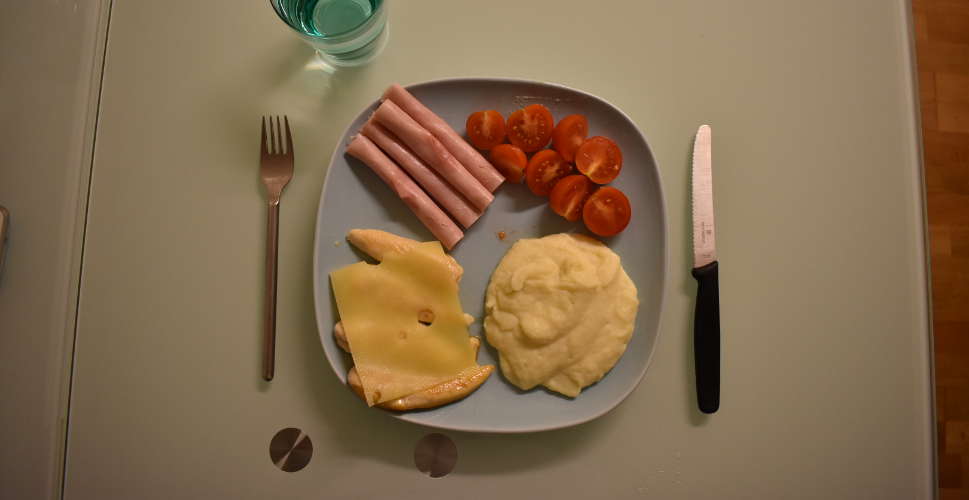 Installed in the eighth apartment of the trip, we prepared the food and we took another nap. We had already gone through 3,245km of roads and an average of 10km of walking a day. We needed to rest!

When we woke up, the sun was shining, so we went for a walk around the town. We had read that the town’s square was one of the most beautiful in Switzerland, so we went straight there to see it… Upon arrival we saw the square and we thought we were in another Schwyz… if it is ok for you, we leave the photo below and you make your own opinion. Maybe we saw it from the wrong side… I do not know! But hey, in this square, we could have eaten at the restaurant Wysses Rössli. 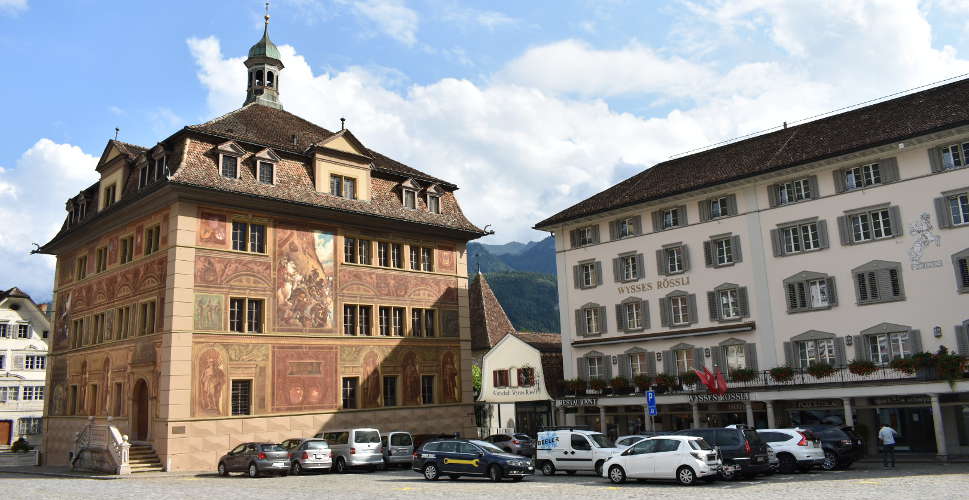 In less than half an hour, coal-black clouds formed and it started to rain again. We had to run back home, but we couldn’t do it due to the steep slope to get back to the apartment, so we arrived totally soaked… we spent the rest of the afternoon looking for places to see the next day in Lucerne and playing the board games that we had brought from Barcelona. We love to travel by car! You can take everything with you!

The next day, we got up at a reasonable hour and, after having breakfast, preparing some mid-morning snacks and lunch, we left for Lucerne. We were about 40 minutes away by car and, in principle, we were only going to see that city, so it was not necessary to arrive very early. Also, considering my last experience in Zurich when I went to Athens for work (I paid 60€ for a fairly simple meal for two people), we had decided not to eat at any restaurant because everything was too expensive and we needed to save money to go up to the Gornergrat in Zermatt the next day (the price of the rack train is almost 90€/person). 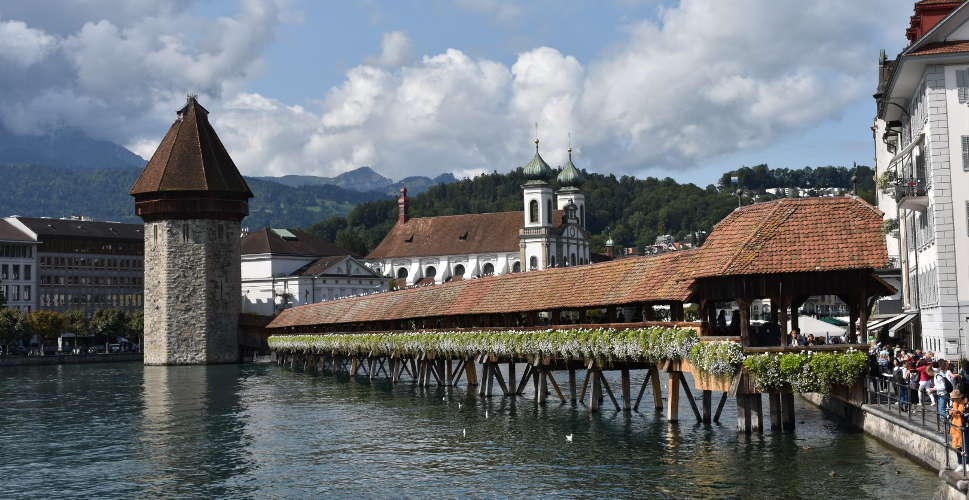 When we arrived in Lucerne we realized that it was Sunday, so we could not visit some of the sites we wanted to. Once we accepted the change of plans, we took the opportunity to take a slower stroll through the city. We left the car in a covered parking lot and went to the center. Basically, we went to see the famous wooden bridge and the cathedral. There were many more tourists here, of course. When we got to the lake, we ate the pork loin sandwiches for breakfast and sat down to do one of the things we like the most when we travel: observe everything and everyone passing by.

Although this time we did not see it, very close to the cathedral you will find the Lion Monument, which commemorates the death of 300 mercenaries of the Swiss Guard during the French Revolution. You will find it in Denkmalstrasse 4. 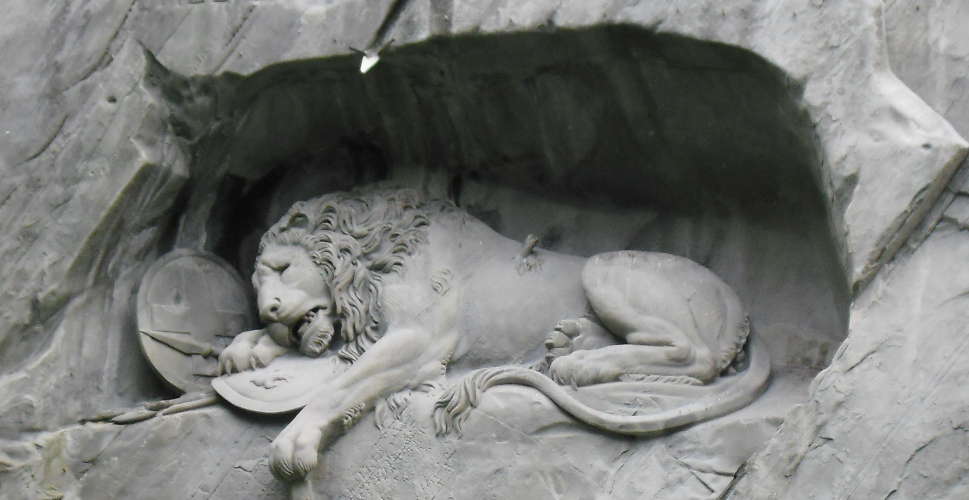 In case you are planning to go to Lucerne for a longer period than one day and with more budget than us, below you will find some gluten-free restaurants:

In case yo need to buy gluten-free products, you can go to:

As we had already seen everything we wanted/could see in Lucerne and it was still too early to return to Schwyz, Isabel and I looked at each other and decided that we could finish the day in Zurich. That was our intention! Also, we would try to do a Free Tour.

On the way to Zurich, Isabel saw that we would only arrive on time for one of the Free Tours in the Grinch neighborhood. The comments of other people who had done it before were not very good and the area didn’t look like being in Switzerland… as we did not want to leave the car there, we decided to go downtown. 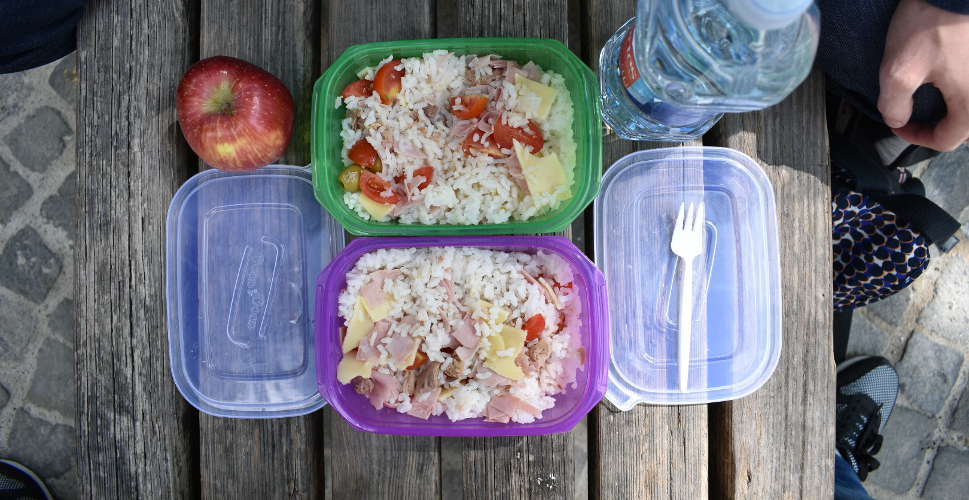 We arrived at the center of Zurich really hungry and, once parked, we looked for a nice square to eat the rice salads that we had prepared. If you are looking for gluten-free restaurants in Zurich, here is a list of those you will find near the center: 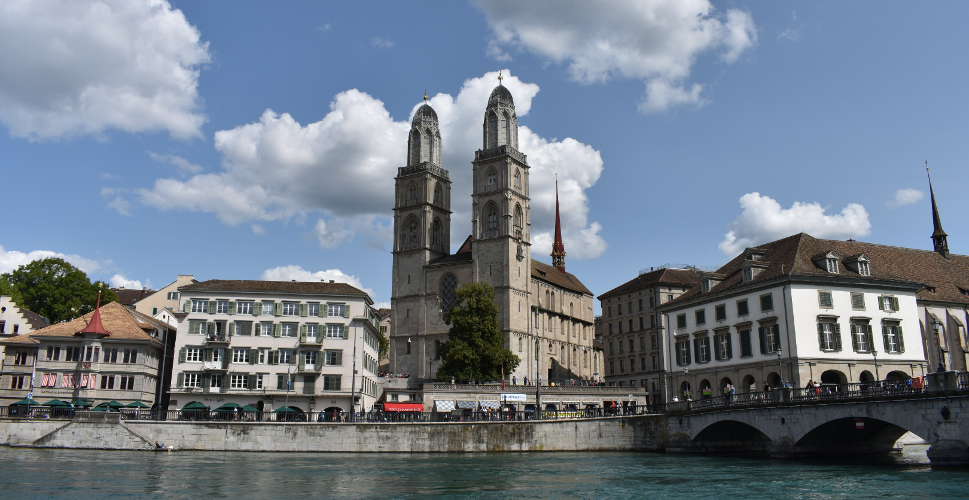 After eating sitting on a bench near the Cathedral, we walked around it and returned to the main promenade, next to the lake. We sat for a while on the edge of the river and we continued walking until we reached a square that we thought was very curious. Instead of benches, there were pairs of chairs tied together with a chain. If you look for it, it’s called Bellevue Square.

We sat there for a while, observing everything again. Although on that day we also walked the 10km, as you can see, that day I was being much more relaxed than others, without seeing so many things and enjoying more the slow walks. 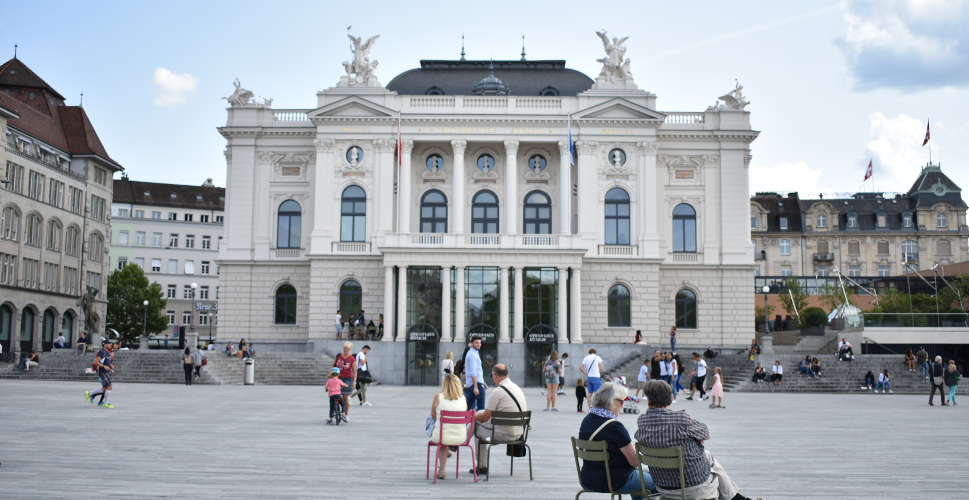 Sitting in the square of the chairs, we thought it would be great to see the sunset on a lake like Gosauseen… Suddenly, we remembered that the owner of the apartment had told us how beautiful the Lake of the Four Cantons was. Same situation than in Lucerne: we looked at each other and decided that we could finish the day in Brunnen, walking around the lake while watching the sunset. 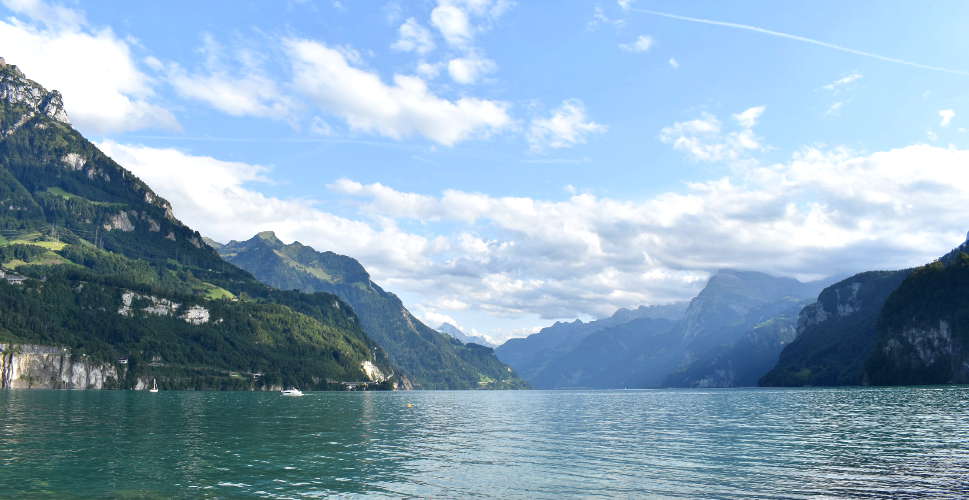 After an hour, we were already there! The owner of the apartment had given us good advice. The lake is very beautiful and has a small promenade, from the square bordering the lake until the port. The weather was wonderful! It was great to end the day there. If you plan to eat in this village, you can do so at the Gasthaus Pluspunkt restaurant on Rosengartenstrasse 23 in Brunnen. 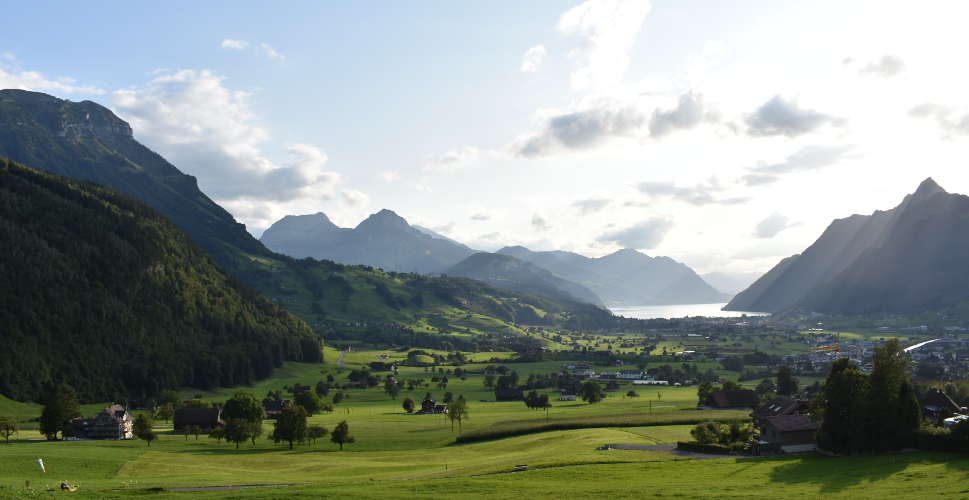 In theory this day we were only going to drive to Lucerne but, with so many improvised decisions, we ended up driving almost 200km… exhausted, we returned home to prepare dinner and leave the car loaded before going to sleep. The next day we were going to the last city we would visit in Switzerland: Zermatt. We were really anxious to get to that amazing mountain place! 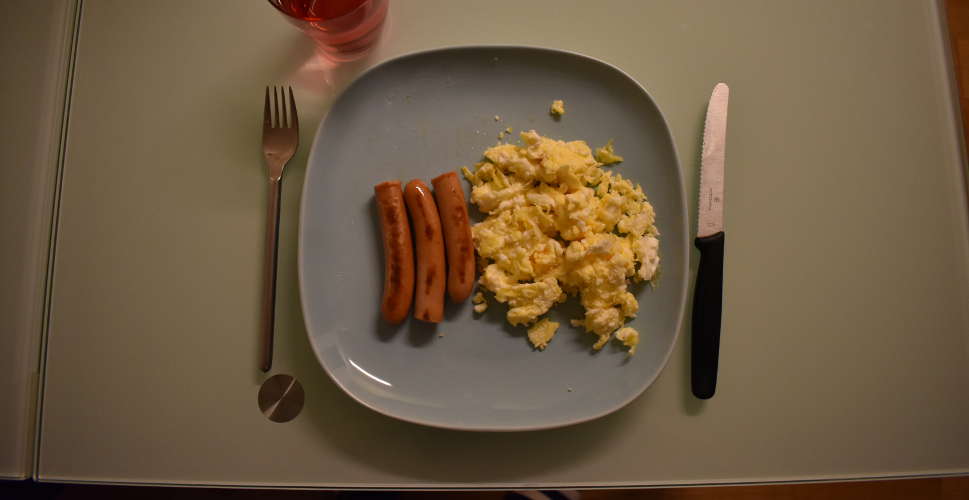 You can see the pictures of Schwyz here.

You can see the pictures of Lucerne here.

You can see the pictures of Zurich here.

You can see the pictures of Brunnen here.

AND HERE WE LEAVE THE CELIAC TRAVEL CARD IN SWISS GERMAN: 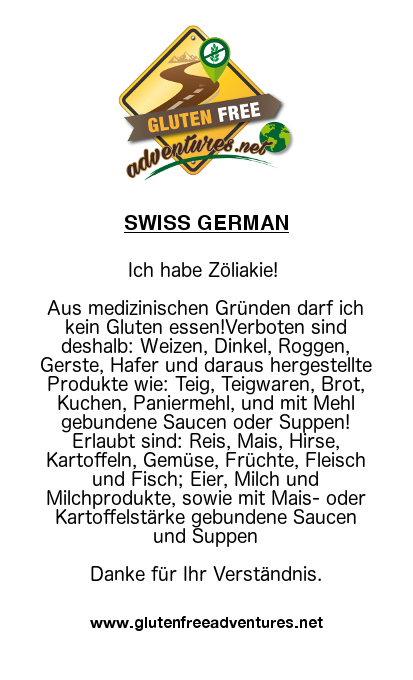