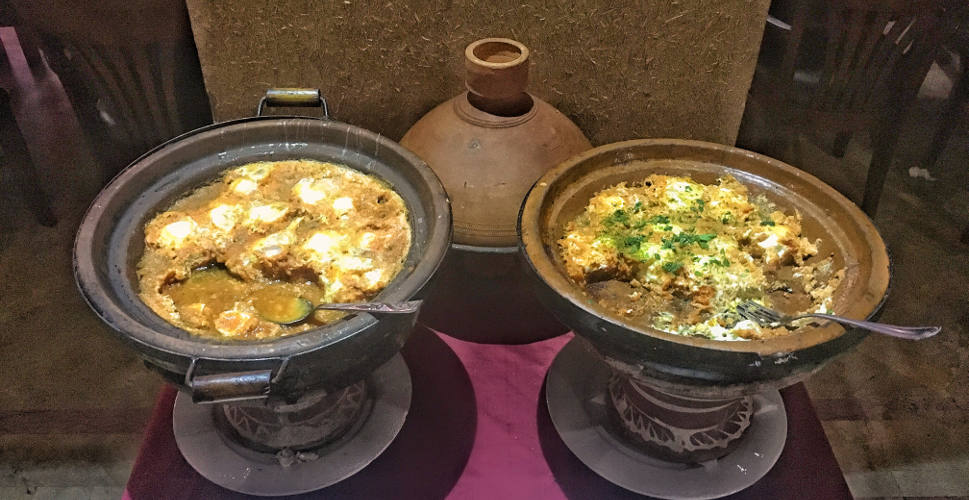 Midelt and Lake Yasmin: delicious gluten-free Berber meals between the Atlas and the foot of the Erg Chebbi

After a delicious gluten-free breakfast at the Casamayor 2.0 bakery in Cuenca, I said goodbye to Isa and headed towards Valencia, where I would meet Carles and Aurea. As is tradition, we would eat a gluten-free hamburger at McDonalds and then drive to Murcia, where Carles would cut his hair at the CC Las Condominas. Then we would continue driving to Almeria. There, we would sleep at the Hotel Gran Fama and dine on suckling pig at the Restaurante La Piedra. We had been doing it like this for 3 years.

We were meeting at the hotel hall at 8:00. During the check-in, they had already noted that I am celiac. At the buffet, they were already waiting for me with a couple of freshly baked gluten-free muffins and gluten-free bread rolls. This was perfect. The cold cuts were very close to the bread and, although there were no crumbs on the cold cuts, they were still too close for my taste. I talked to the waitress and asked her to prepare a separate plate with gluten-free cold cuts. She brought me a plate of ham and salami. We were starting the day very well! 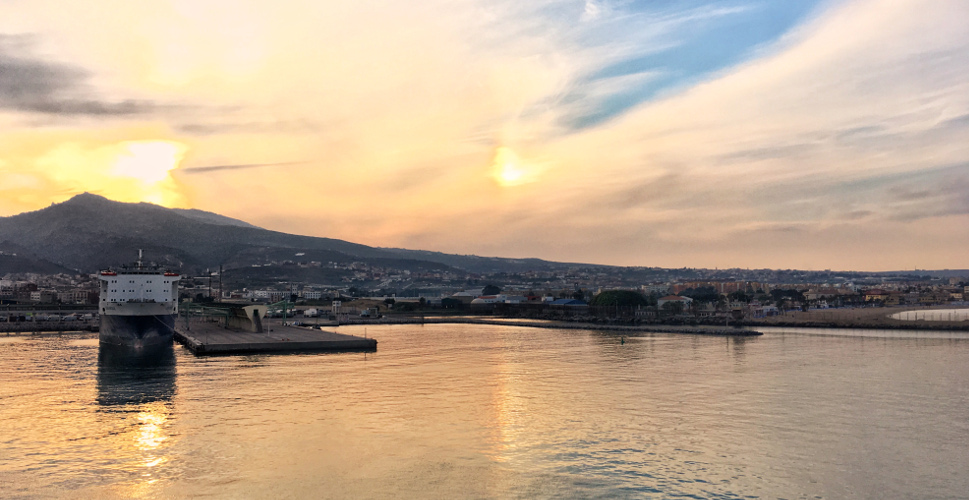 That year we were lucky and the boat from Almeria to Nador sailed early. If the sea was calm, in 6-8h we would reach Nador and the border… well… this is a relatively easy border if you treat well those who fight to help you.

As we waited to board, we met a friend of mine. He would accompany us until we left for Fes.

We prepared some gluten-free snacks to eat during the trip and continued talking to all the adventurers who were there, with the off-road vehicles, waiting to embark to start another adventure in Morocco.

The journey by boat, as always, became eternal. We crossed the border very quickly thanks to a boy who put a lot of effort to help us. Then we took the 5h of rigor until arriving at the Hotel Taddart, in Midelt. We arrived at the hotel at 12 o’clock in the evening… the kitchen had already closed, so we had dinner each in his room. I opened the just in case shopping and took a package of loin of Cuenca, a little can of tuna and the first package of bread.

The next day the real adventure began. We had planned to arrive in Merzouga in the evening, after crossing the Atlas in the direction of Errachidia. After that we would go through the monuments of Hannsjörg Voth till Arfoud.

Every good adventure begins with a good breakfast. And so it was. I had brought with me the bread and the remains of the loin I had eaten for dinner the day before. But after talking to the waiters and showing them the gluten-free travel card in French, I didn’t need to eat that. Apart from the rest of the breakfast buffet, there were two typical Moroccan dishes: they called it Berber breakfast, and it was made with eggs, tomato and parsley. After asking the waiter several times to make sure the dish was gluten-free, I decided to have breakfast like a berber. Fantastic! It was really good. I accompanied it with some of the gluten-free bread I had brought with me. 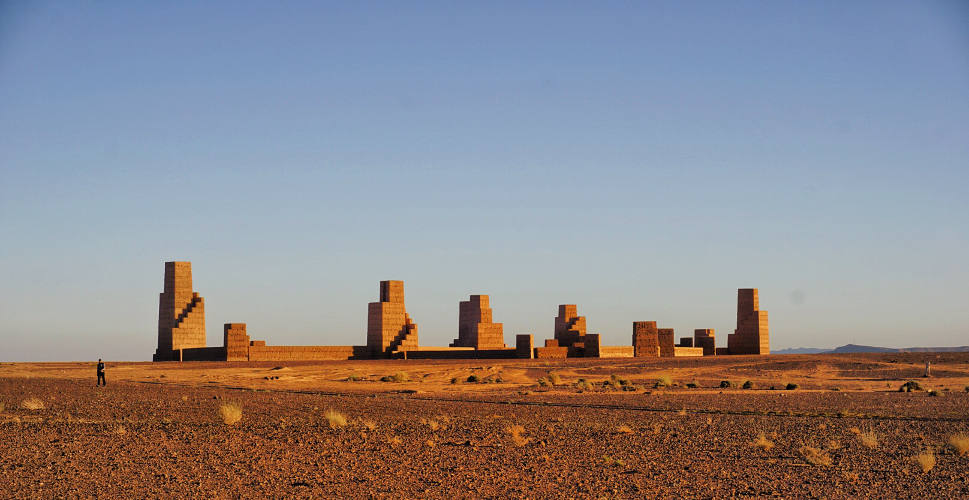 Shortly after leaving the Taddart Hotel, we had to turn around because there was too much snow and we couldn’t pass… after trying unsuccessfully at different points, we decided to get to Errachidia by road and, from there, follow the track to the monuments of Hannsjörg Voth. This is an architect who made three land art constructions in which he lives 6 months a year. The Staircase to Heaven and the City of Orion are the ones I like the most.

We saw the sunset from there. It was beautiful. We separated from Jordi in Arfoud and continued to the Auberge Cafe du Sud, on Lake Yasmin. 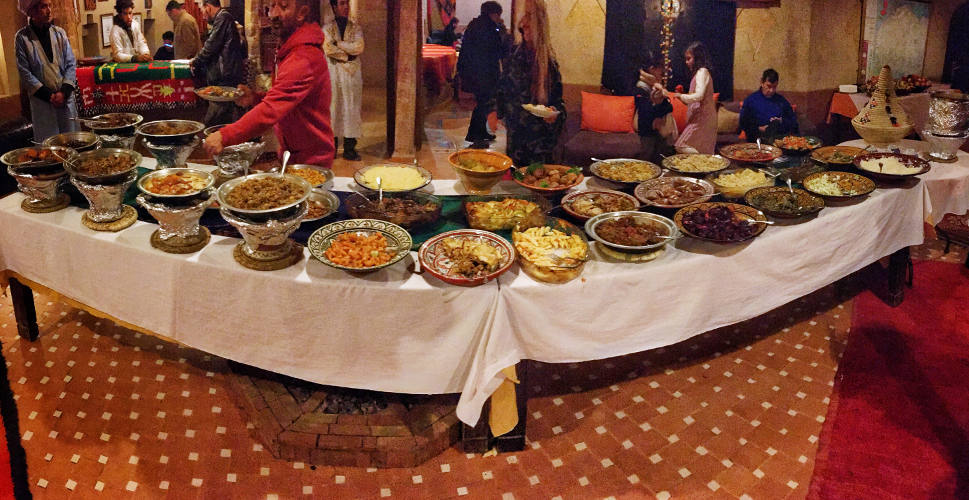 We weren’t planning on going to this hotel. We had been booked for another hotel for months. A hotel that cancelled our reservation a week before because they had a very big group and needed our rooms… yes! This happens in Morocco… and surely in other countries too… The Riad Café du Sud was right next to Lake Yasmin, at the foot of the Erg Chebbi. We arrived at night, so we couldn’t appreciate the beauty of the landscape around us.

Once settled in, we went straight to the hall to see what we could have for dinner. There was a very long table full of typical Moroccan dishes. 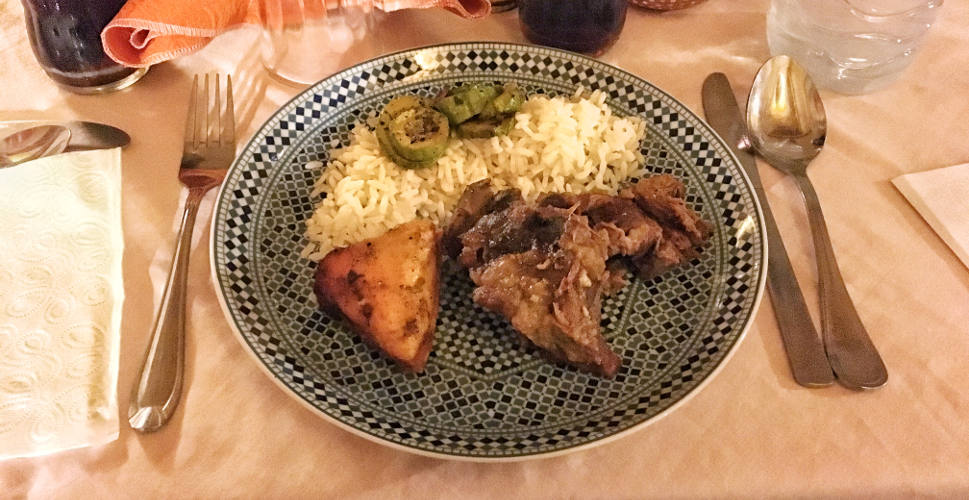 There were many options that seemed gluten-free to me: chicken, lamb, beef, rice, vegetables, salads… everything seemed safe… but I didn’t know if it was. I became friends with Said, who was in charge of the dinners. I showed him the gluten-free travel card and he went to the kitchen. He came back with the smile that characterizes people in that area and told me what dishes I could eat. I ended up filling my plate with rice, lamb and vegetables. Then came the “Paco moment”! We took out the bottles of limonchelo and pomace of herbs that Paco prepares for us every year, and toasted to his health. Paco is the lord of the restaurant El Paller de Can Pradell who treats me so well every time I go.

The next day was a little different. The breakfast buffet was very complete, but there were very few things I could eat. It was full of breads, croissants, some fruits and jams. Unlike dinner, this time I could only eat boiled eggs. This was not new to me. On all previous occasions I had traveled to Morocco, at breakfasts, I had to eat from the “just in case shopping”. I put a couple of boiled eggs on the plate, cut them in half and ate them with a bit of ham and gluten-free bread from the one I brought with me. 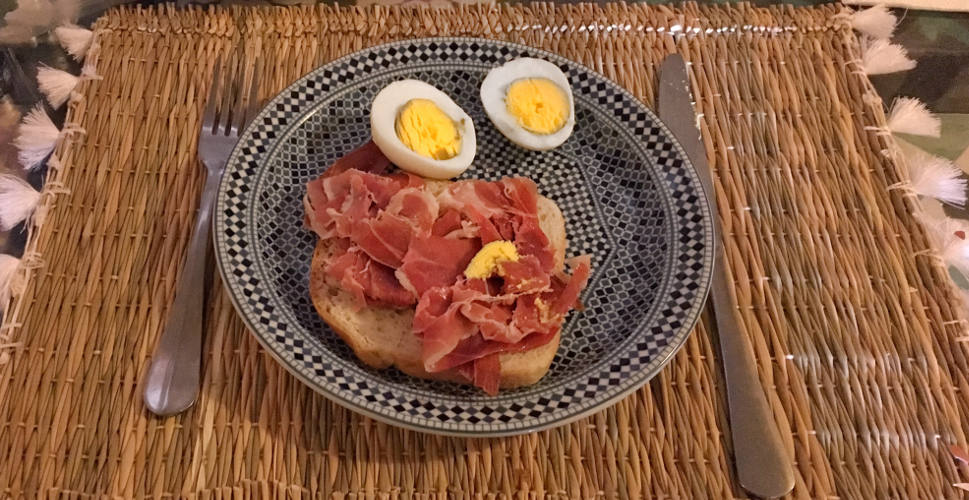 Before going to prepare the cars to enter the dunes, we got lost through the hotel, discovering it. Too bad it was December… although during the day we were between 20 and 25 degrees celcius, it wasn’t hot enough to bathe in that beautiful pool. Surrounded by palm trees and hammocks, in summer, this pool would have been the best gift after spending a day in the desert. Also, from inside, you could see the dunes of the Erg. 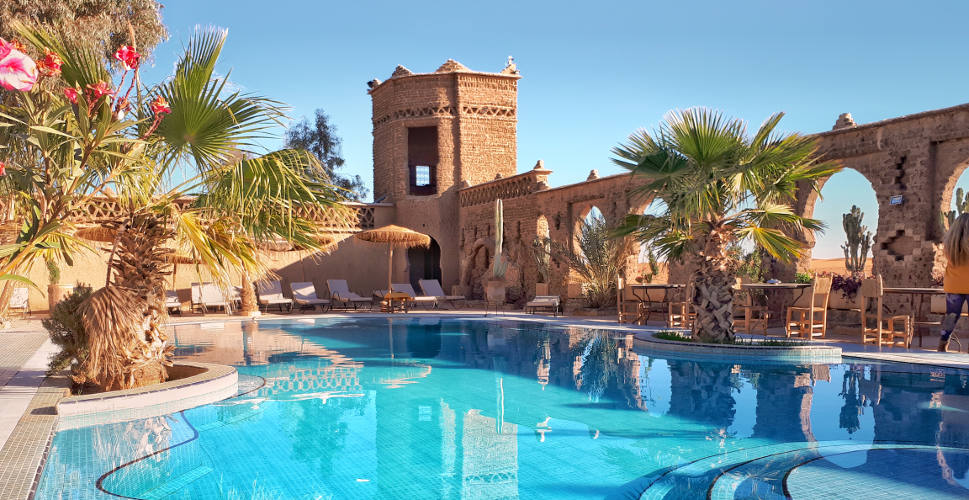 That day we wanted to reach the Oubira oasis, in the middle of the desert. According to the GPS, the oasis was 11km away in a straight line. The objective would be to eat there, in some haimas that were in the oasis.