It was Monday and I was on vacation! So I took the opportunity to sleep a little more than necessary. You have to give yourself these pleasures from time to time! Also, that day I had a clear idea of where I would eat lunch, but not so much where I would have dinner… just like happened on our trip to Antwerp, on that day most restaurants were closed…
When leaving the hotel, after 11 o’clock in the morning, I was very happy to see that it was a splendid sun. It encouraged to walk around until lunchtime. 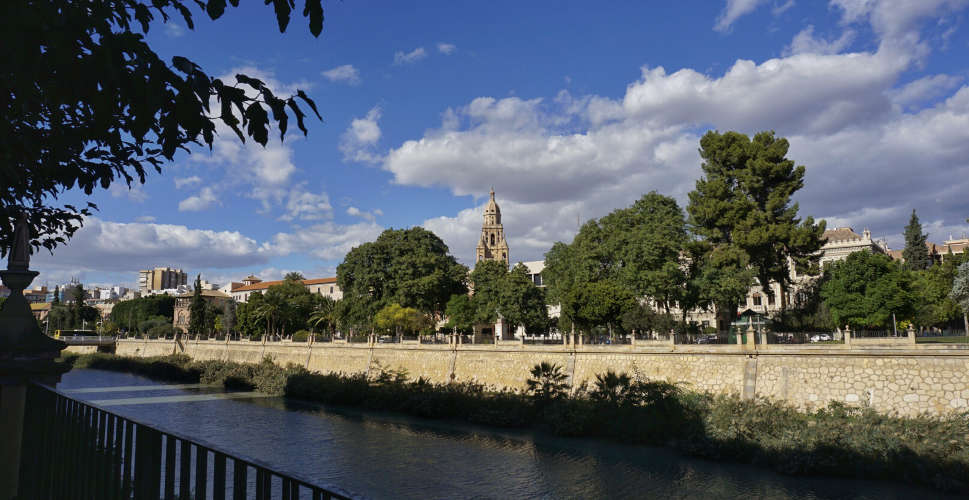 That day I had a plan that would not be fulfilled… I wanted to have breakfast at La Casa del Celíaco, eat at the Imperial Pizzeria and have some tapas at La Trastienda de Pablo González. That was the intention… but didn’t take into account that, on Monday, many restaurants are closed… I had to change the plans! Just like when I travel with Isa, I looked for other options while exploring the city. The Vox Populi was also closed and… guess what! Bar de Las Artes – which is 100% gluten free – was also closed…
The list of available options was getting shorter… and I still had not had breakfast! 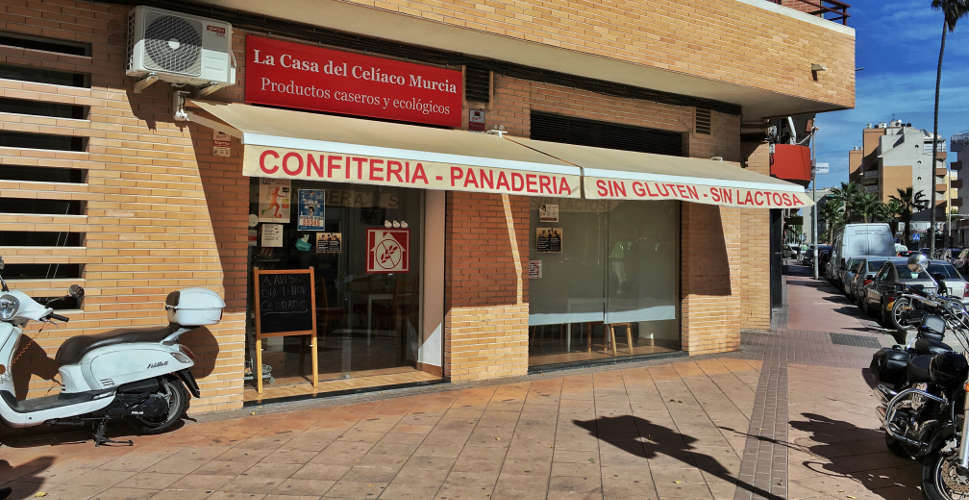 While I was going to La Casa del Celíaco, I found the Supersano supermarket, where you will also find gluten free products in. Although unfortunately there is not much variety… Once I left the supermarket, I focused on finding where to have breakfast… it was already 12.30 in the morning and I was really hungry… sometimes I feel a bit like Obelix… who is always hungry!
I had read that in some coffee shops I would find gluten-free pastas, so I would have tea and some pasta… mistake! I was in two coffee shops of the list and they had nothing… 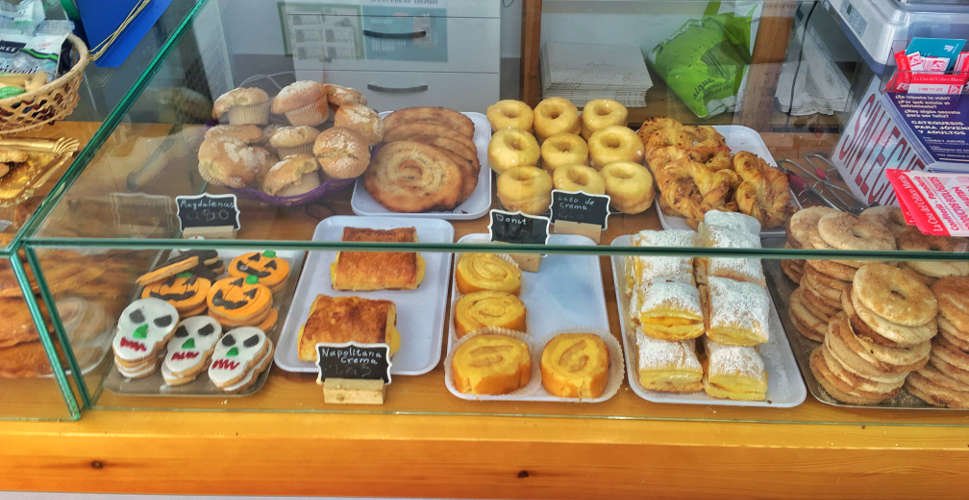 Discouraged… I decided to play it safe. I went straight to La Casa del Celíaco! I crossed the river by the old bridge and, when I arrived at 35 de la Calle Torre de Romo, my eyes lit up with everything I saw. My stomach popped open! I had just entered the celiac paradise of Murcia… then Mari appeared, a very nice lady who explained everything they had until she showed me the “Paste de Carne Murciano”, a typical pastry from Murcia made with puff pastry, minced meat, chorizo, egg and spices. I fell in love! 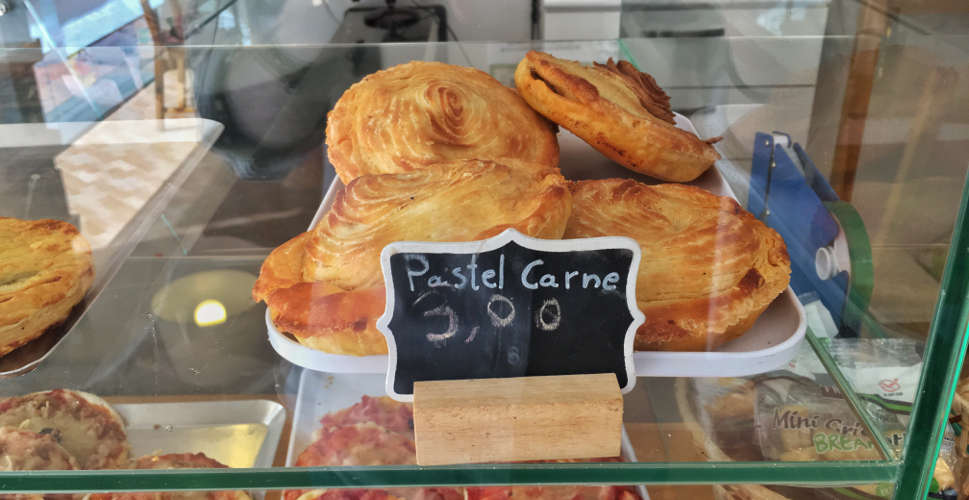 While she was heating it up, I had a gluten free beer. They had a shelf full of gluten-free beers of all brands that you can imagine. There was even some artisan I think…
OMG! When they brought the meat pie it looked like freshly made. The puff pastry was crunchy, well stuffed with veal and, from time to time, you would be surprised by the taste of a piece of chorizo or boiled egg. Delicious!
I was no longer having breakfast… I was eating lunch at European time! When I finished the meatloaf, I was still a little hungry, but not enough to eat another… 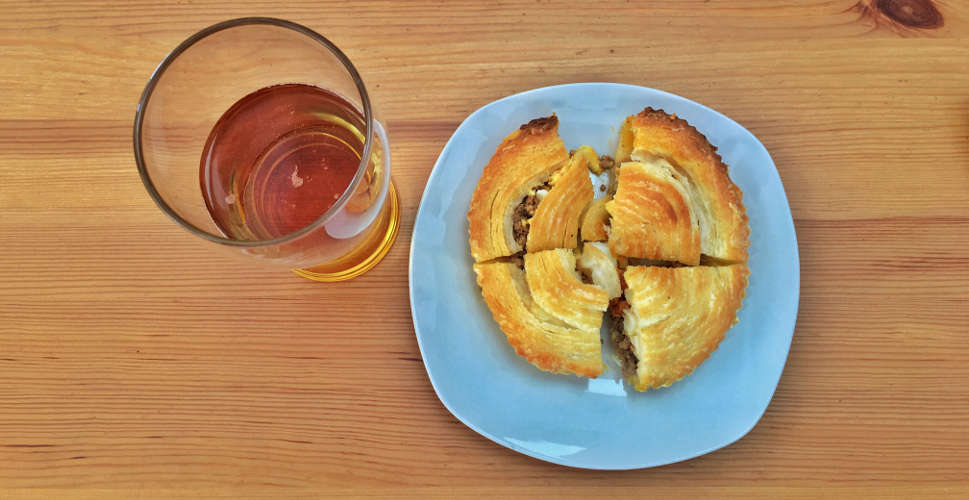 While I was finishing the beer, the blogger vein came out and I started to review the photos… I did not like the one I had made of that dish, since the wooden table turned it off a little… besides, the beer looked like apple juice… I turned around and I saw that there was a white table… as there was nobody else in the restaurant… I smoothly changed my table and ordered another meat pie… the photo was much better! And I recognize that I ate the second pie enjoying it as if it was the first… and I finished it!

Before leaving, Mari told me that they sent their gluten-free products all over in Spain. You see it! Thanks to them, you do not have to go to Murcia to enjoy a good gluten-free meatloaf…
More than satisfied, I left La Casa del Celíaco with a couple of cream donuts and some “sequillos” – some bread sticks typical of Murcia – that Mari had given me to try. I also left with the promise that I would return the next day for breakfast. 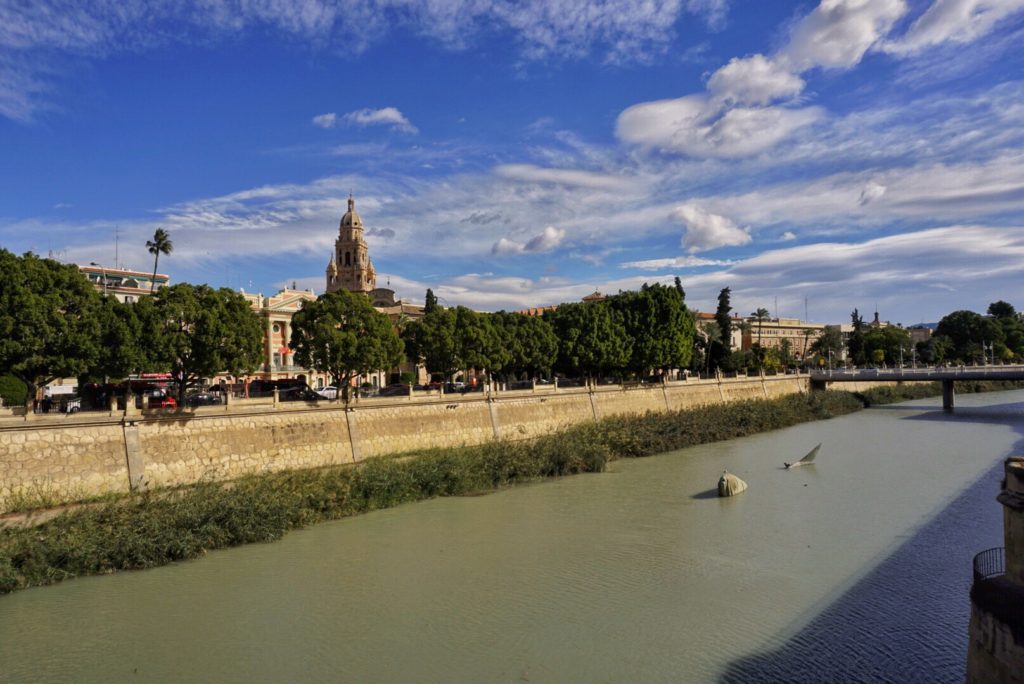 Back to the other side of the river, I stayed for a while at the town hall to take pictures of the flags and other parts of the building. Then I sat down to sunbathe and, when I began to notice that I was sun-burning, I took refuge in the downtown streets until late in the afternoon.
As I had seen everything I wanted to see, I returned to the room to write more articles for Gluten Free Adventures before going to the Imperial Pizzeria for dinner.

I had found this restaurant by chance. I knew there was an Italian restaurant with this name, but I did not know it was right in the Plaza de la Catedral. I had seen it while walking that same day and booked a table.
They sat me in front of the workshop and brought me the menu along with the drink I had ordered. There was no gluten-free pizza, but they had several types of gluten-free pasta. This I liked, because the most usual thing is that in restaurants they have spaghetti or macaroni. Here they had three types of pasta: spaghetti, macaroni and noodles.
In addition, the menu indicated that all the sauces to accompany the pasta were suitable for coeliacs. Phenomenal! 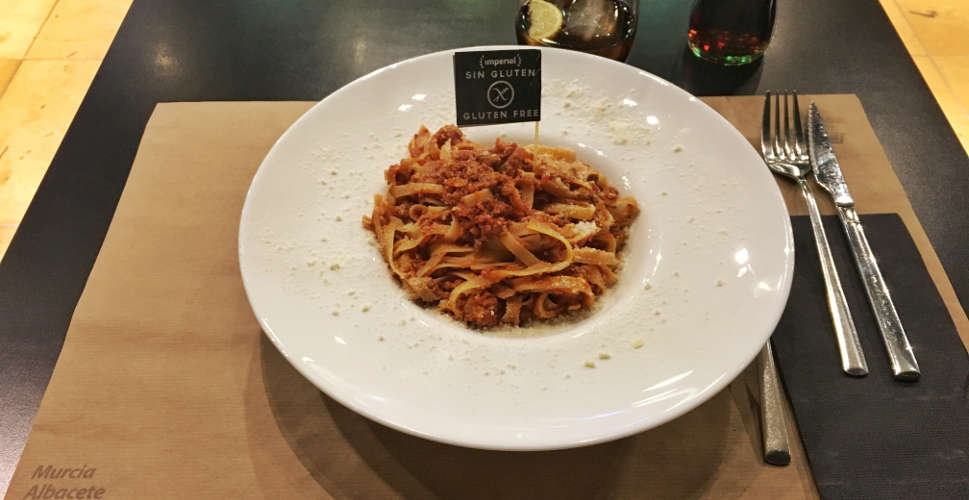 Finally I ordered some noodles without gluten with Bolognese sauce. They brought them very well identified with a little flag indicating that they were gluten free. As often happens to me when they bring me food in these wide-brimmed bowls, I thought there was little food. And as always… I was wrong.
I enjoyed those noodles a lot, since I do not usually eat them very often. In addition, the sauce was very rich and the Parmesan cheese that had been sprinkled on top gave it a magnificent touch. I finished the day very well!