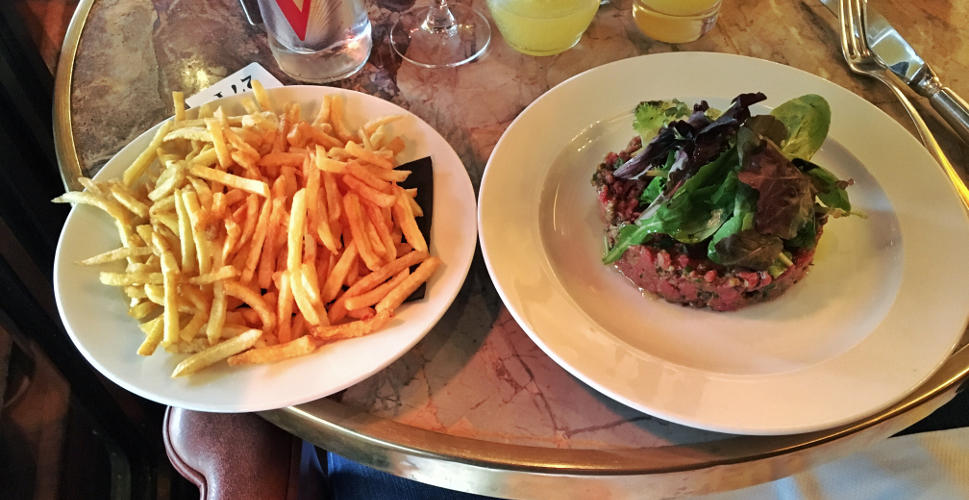 Paris: a good reconciliation with the city in which I lived one of the worst gluten contamination in my life

It is very strange that I say this… I didn’t really want to make this trip! Paris is a very attractive city for tourists of all ages, but for me (as a celiac) the last time I went it had lost its charm… in fact I think France is a very difficult country. Let me explain. It is a beautiful country. With stunning landscapes, towns and cities. But, in general, they don’t really make it easy for coeliac people. It was confirmed when in the Chateau de Chenonceau, in the Loire region, the waitress at the castle restaurant told us how difficult it was for her mother to eat gluten free there. Is it impossible to eat gluten free in France? No! But you have to be really careful and, considering our experience, it is sometimes better to buy products in a supermarket and eat them in the apartment or in the hotel room…

As I said, after the experience of 2016, in which I lost between 4 and 5 kilos of weight due to gluten contamination, I did not feel really happy when I had to return to that city… But I had no choice! I had to attend that exhibition… so, knowing what was waiting for me, I prepared a good “just in case shopping”. In fact, I carried a backpack full of food. Although I would continue looking for gluten-free restaurants in Paris, this time they would not contaminate me like the last time I visit this amazing city. 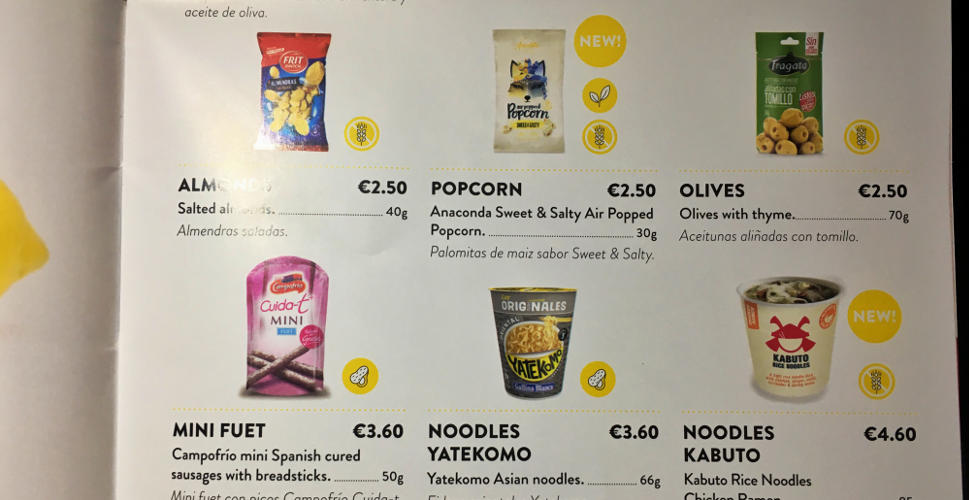 After another early morning typical of work trips, my partner Daniel and I flew to Paris with Vueling. Although it was very early, I looked at the menu of the plane to see if there was anything gluten free. I think this is already professional deformation! I was not hungry at all, but I was surprised to see that there were many gluten free options.

I still did not know, but that trip was going to be totally different from how I expected it to be. When we landed, I saw the replica of the Concorde exposed to the side of the track… what a pity that a project like that ended so badly! After picking up the suitcase and the rental car, we went directly to the hotel. I had booked in the La Muette neighborhood, relatively close to the Eiffel Tower. I went there on the recommendation of Daniel, since he lived very close and would be convenient for us to go back and forth from the fair. Also, he knew a restaurant where I could probably eat well. 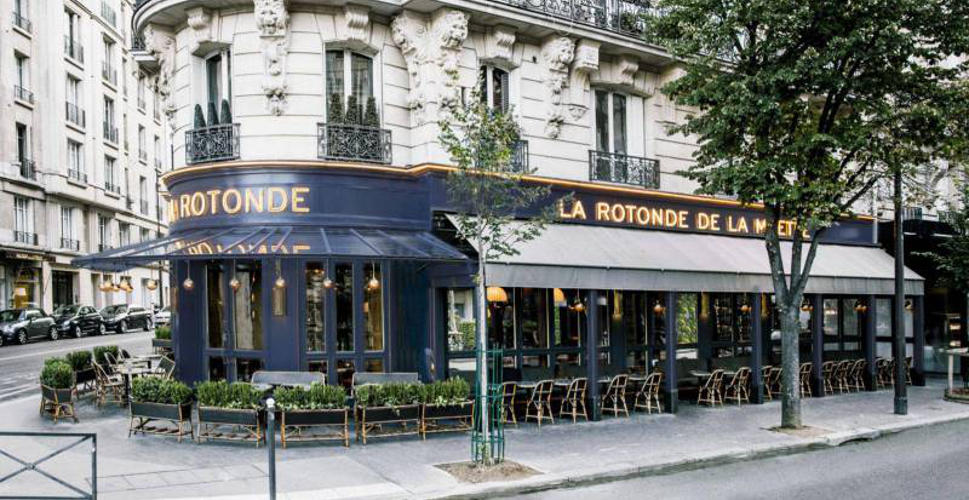 Once installed, we went to La Rotonde de la Muette, at number 12 of Chaussée de la Muette. This was a typical Parisian restaurant. Although it was cold, smokers sat on the terrace, under the gas stoves. Inside, it was like traveling a century ago. The decoration was very classic, made of wood, with mirrors, painted ceilings and armchairs.

We did not have a reservation, so we had to wait almost an hour to be able to be seated. Luckily, it does not close at noon. Something I did not expect in France either.

Once seated, I took the opportunity to explain my celiac condition, and other allergies. The level of English in France is very similar to the level of English there is – in general – in Spain. Pretty low. Luckily, Thibaut spoke Spanish. This made things much easier. After explaining my allergies and intolerances, Thibaut told me that the options I had were even smaller… I asked him to tell me what dishes I could eat and he pointed out a few. I memorized them, because if that meal went well, I would go back to that restaurant. Of all the options that he indicated me few on the menu, the one that I most wanted was the Steak Tartare, which is usually eaten with toast or fried potatoes.

After explaining the risks of cross contamination, Thibaut spoke with the cook to make sure the chips were safe for me. When he returned to our table, he confirmed that I could eat them! The steak tartare is a dish that I love. I do not have very clear idea of what is the origin of this dish. Some say that the original recipe comes from the Tartar horsemen, a tribe of Mongolia from the 5th century. Others, based on Marco Polo’s Book of Wonders, say that it was eaten in the province of Caragian, in China. Maybe it’s a mixture of both cultures… hard to tell!

Regardless of its origin, the recipe is very simple: raw minced beef with spices. Some serve it with an egg yolk on top – also raw – so that the diner mixes it with the rest of the meat and spices. They did not do it that way, but they brought it with a salad and a separate plate of chips. Everything was very good! I really enjoyed eating that dish, although the one I ate many years ago in Evian (also France), is still the best. I hope to be able to return one day. 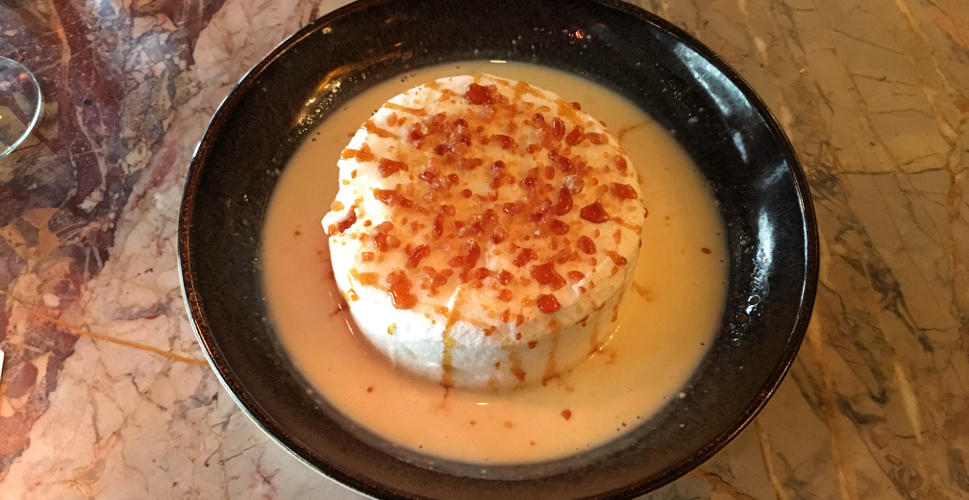 When dessert time arrived, Thibaut asked us if we wanted something. Again I asked what I could eat. There was a chocolate coulant with vanilla ice cream that was marked on the menu as “gluten free”. Even so, I kept reading the dessert letter and saw that they had the Floating Island. Suddenly, the Floating Island that we ate Isa and I in Besalú came to my mind. I ventured to ask Thibaut. After contrasting it with the chef, he told me that I could eat it.

I really wanted to eat meringue and, mixed with the Anglaise cream, I was very happy.

It was a very good meal! Now it was time to wait to see if I had symptoms or not. So far, this post sounds a bit pessimistic… but I had reason to distrust Parisian cooks… but do not worry, the trip improved and I became more optimistic! 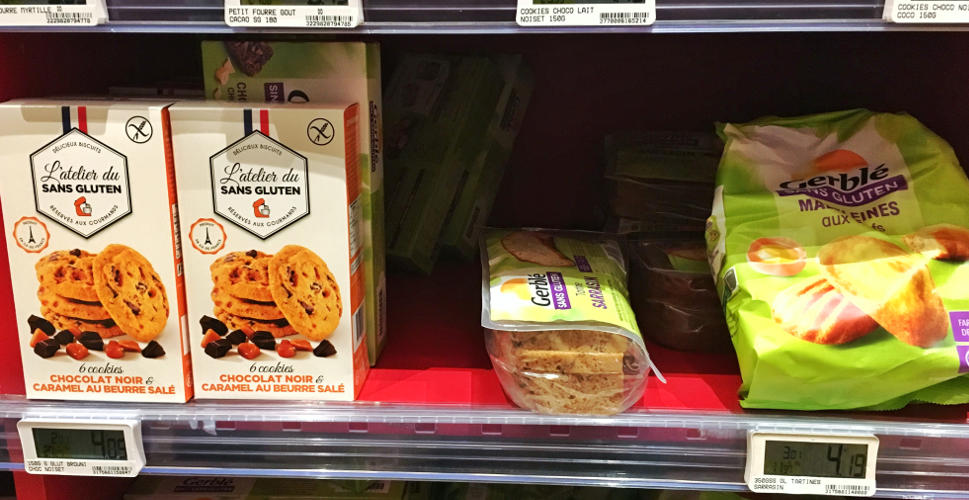 After lunch, I looked for a supermarket to buy gluten-free in Paris. I needed to have something to eat for breakfast. The hotel offered breakfast, but had no gluten-free options and the mini-buffet they had was too risky…

My hotel was on a pedestrian street, full of small specialized shops: greengrocers, butchers and others. It also connected to a small shopping center that faced a main street. Inside I found the Monoprix supermarket. This is a chain of supermarkets that you will also find in other French cities. There was an entire island of gluten-free products there. This part was easy… now I had to find some cold cuts to accompany the bread. At the fair there was nothing gluten free, so I would take a sandwich to eat.

Finding the gluten free cold cuts was more difficult, since there was none labeled as gluten free. I kept looking and found two Spanish brands that were labeled as “gluten free”. I took a sausage and a packet of ham. When I got to the room, I realized that there was no refrigerator… we were in winter, so I improvised one: I closed the outer window blinds and left the sausages there, leaning on the railing.

Then I went for a walk to the Eiffel Tower. It had been almost 20 years since I had been there! I stayed there to watch the sunset and then walked back to the hotel room again. It was 7 in the afternoon and it was very nice to walk through the streets of Paris, full of people on the terraces, despite the cold.

My intention was to take a nap until dinner time. I did not have any symptoms, therefore, I would go back to La Rotonde de la Muette. 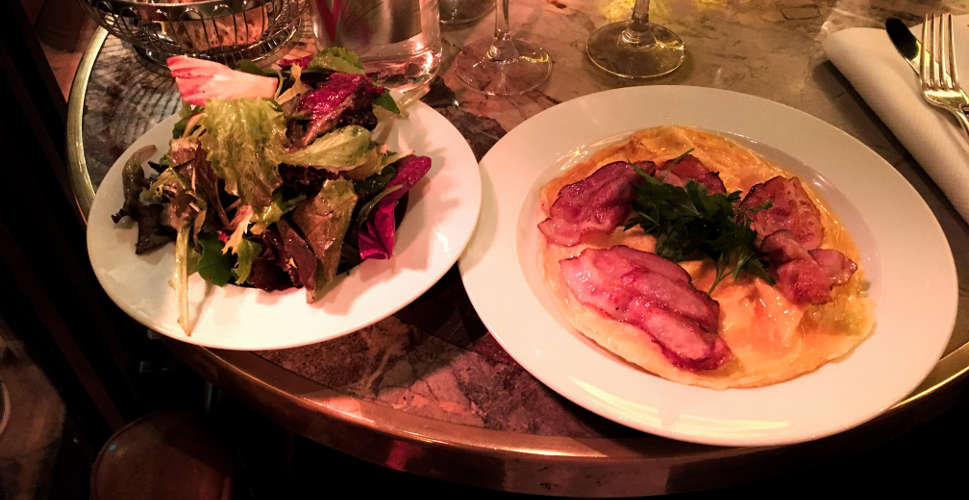 Unfortunately, my plan was not fulfilled, since I slept until the next day. I woke up at 5 in the morning without really understanding what had happened… I had set an alarm to wake me up at dinner time…

It was the day before the exhibition began. Daniel and I went to the stand to organize it and putting everything in the right place. I ate some cookies for breakfast and a gluten free sandwich I had prepared with what I had bought in the Monoprix. At mid-morning I left for a while to go and pick-up Rio, my agent from South Africa, at the airport. When we had everything finished, we went back to the hotel and then to take dinner.  Again at La Rotonde. 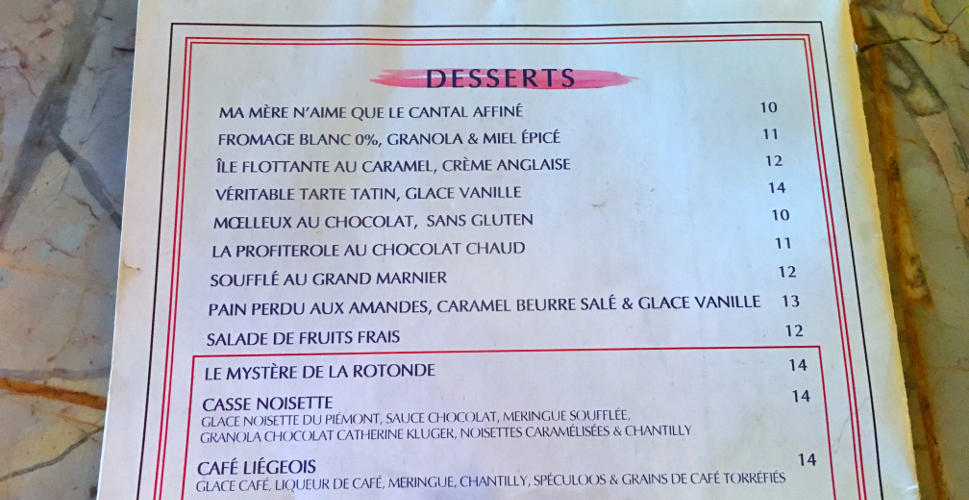 Thibaut was back, so asking was easy again. This time I ordered the omelet with ham. I knew I would be hungry, but I would reserve some space in my stomach to be able to take the gluten free chocolate coulant. While we were ordering the drink, a lady interrupted our conversation to recommend us two drinks: “Kir de cassis” and “Rose”. The first is a French cocktail prepared with redcurrant and white wine. The second is a rosé wine.

When we finished our main course, I ordered the coulant directly. It was served on a small plate, with a glass of ice cream and a chocolate coin with the logo of the restaurant.

It was really good! The coulant was very well prepared, and at an optimum temperature. Hot, but without burning! And the ice cream… OMG! It was delicious too! We really enjoyed that dinner. 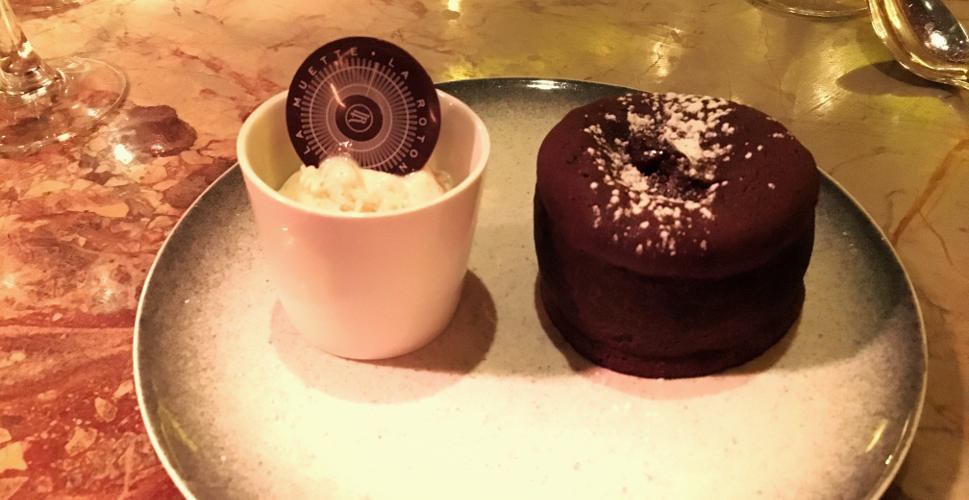 When we finished, we went back to the Eiffel Tower so that Rio could see it. We arrived at night and it was already illuminated. Even so, it was crowded with people taking pictures with that emblematic tower. Rio was quite tired, so we decided to return to the hotel soon. We would have time to see Paris for the rest of the week. In addition, we would take advantage to discover other gluten-free restaurants that I had found. 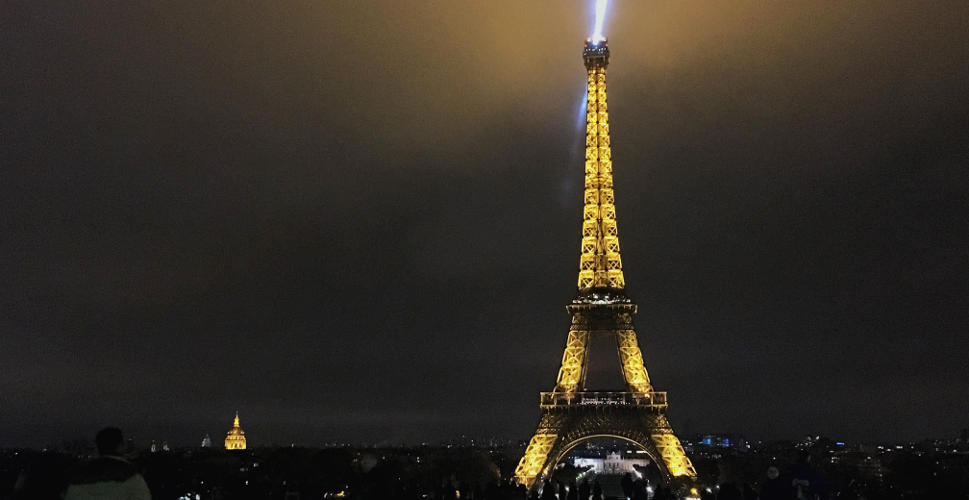 We stayed 3 more nights in Paris. Two of them, we had dinner at La Rotonde de la Muette. These two times it was without the help of Thibaut, so everything was a little harder. The first night we had a big piece of Aubrac veal matured for 6 weeks accompanied by vegetables. The next I repeated the steak tartare. 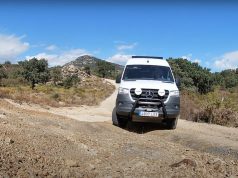 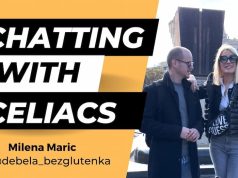 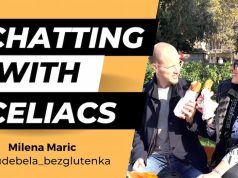 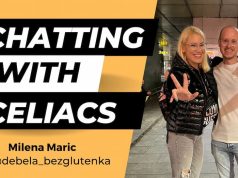