After visiting Dijon, Heidelberg, Rothenburg ob der Tauber, Munich and Neuschwanstein Castle we were driving north to our next stop: Prague. We were really looking forward to get there! We always wanted to visit this city. In fact, the initial trip was to make the three capitals: Prague, Vienna and Budapest, but we decided to make another route and leave Vienna and Budapest for our Christmas trip, as we would spend more time in those cities.

IMPORTANT: As in Austria, when entering the Czech Republic you have to stop to buy the sticker that must be placed on the upper left part of the glass. It is a sticker similar to the Spanish technical inspection with a hologram read by the devices installed on the road. For 10 days it cost 16€ and they only let us pay in cash.

Prague welcomed us with a radiant sun! When we arrived at the apartment, around 12.30 pm, we discovered that the car did not enter the parking of the building at Salvator Superior Apartments on Revolucni street number 18, just next to the Palladium shopping center. The parking height was 1.9m and our car is about 2m. At reception, they told us we could park in the Palladium shopping center for 25€/day. That’s what we did. We unloaded the car and went to park and, once we had the car well parked, we went home to prepare the food and check the shopping list.

After lunch, we booked the Free Tour for the next day and reviewed the list of what we needed to buy. We went directly to the Albert supermarket that was in the Palladium Shopping Center, next to our apartment.

You can also go to DM Drogeriemarkt (like the ones you will have found in Heidelberg, Rothenburg and Munich), Billa supermarkets and Tesco supermarkets (which is also in the UK).

Buying specific gluten free products abroad is very easy, since they are usually easy to recognize: either because they have the European symbol; because it is a known container (at least for coeliacs); or because they have written the word “GLUTEN” visible on the front. In fact in Albert Supermarket they have private label and also other well-known European brands. 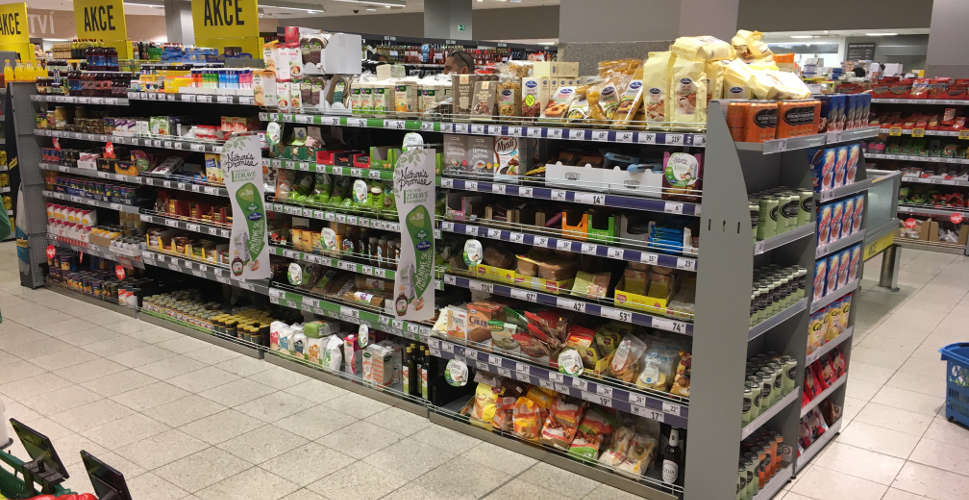 The hard part was buying the rest of the products: sauces, yoghurts, chocolate cream and processed meat (sausages, minced meat…). Although we had a list of words related with celiac disease to look for, we did not want to spend the entire afternoon checking ingredients at the supermarket. As Isabel had the Google Translator application downloaded to her phone we were able to use the application to take a photograph of the list of ingredients and, as the app recognized the text, it translated it quickly.

If you are looking for gluten-free restaurants in Prague, these are some recommended at the center:

You will find some other restaurants offering gluten free service in the apps we recommend in our website. In any case, the best app is the celiac travel card in the language of the country. 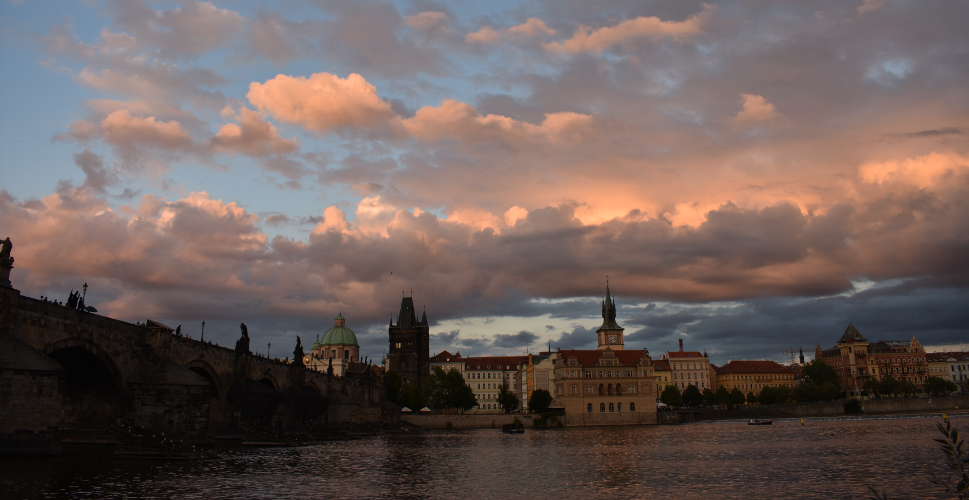 With the fridge full, we took a sweater and went for a walk through the old town. We didn’t want to do much that afternoon, since we would know more about the city thanks the two Free Tours we had booked.

When we managed to cross the Charles Bridge – it took us almost 20 minutes to do it – we went down to the river and sat there for a snack while we waited for the sunset. When it was dark, we went to take dinner at home. 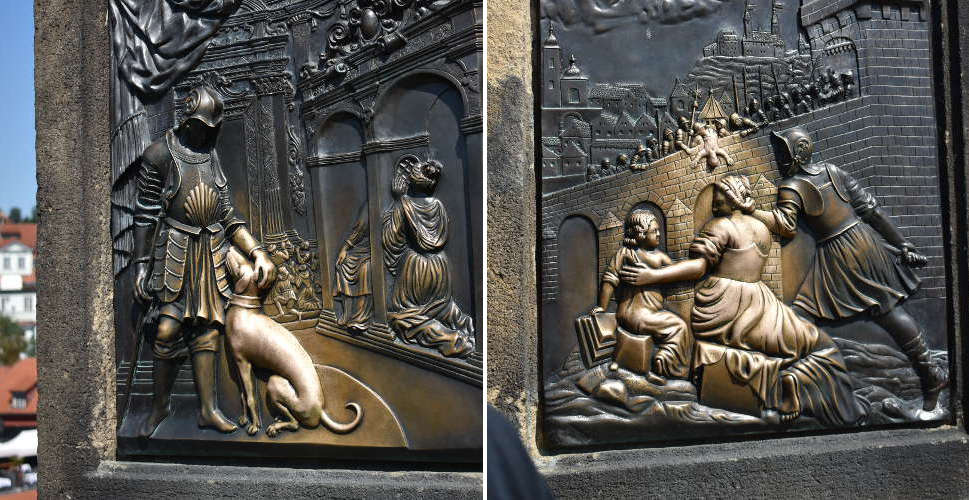 OMG! How well we slept in that apartment! The best beds we had in the 17 days of the trip. We get up just to shower, eat some gluten-free cereals with milk, get dressed and go to the Free Tour.

The Free Tours are awesome because you know the city with a group that you do not know, and the guides do it really well. If not you will tip them with little money. That day we did the tour of the Old Town and the Castle of Prague. Very interesting! Especially when they tell you anecdotes like the statue of St. John of Nepomuk, in the middle of the bridge. In the photo above, you see that we show two parts of the same statue that are worn. In one part, you see a gentleman falling over the bridge. This is John of Nepomuk. In the other a gentleman with his dog.

Of the two, the only one that gives luck is that one of John of Nepomuk. According to what the guide explained, some students began to touch the dog to do a test and see how people reacted. It’s very funny because now you see tourists trying to touch both at the same time or taking pictures with a bright dog… 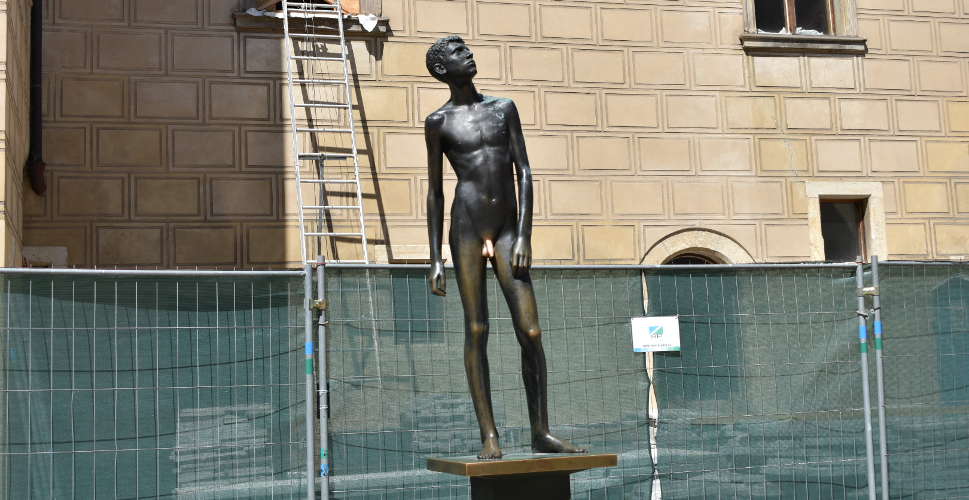 This is another lucky statue… it’s up in the Castillo area, and touching the boy’s penis “favors fertility.” Although we still do not want children, we touched it just in case.

The tour ended at a viewpoint from where you could see the whole city. We stayed there for a while, over the wall, sunbathing and chatting. When we got tired, we went back to the Cathedral. When we passed by with the tour there was a queue of more than an hour to enter and we did not do it. Now it seemed that there were not so many people and we took the opportunity to visit it. 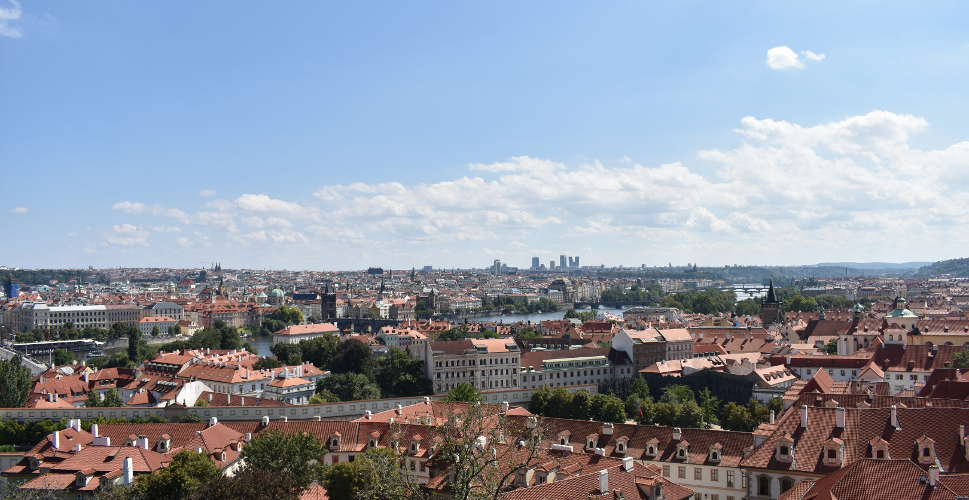 Suddenly it was 3 o’clock in the afternoon… sometimes time flies! We started to go down towards the city center, really hungry. Suddenly we passed by this kiosk of fresh fruit. It was quite hot and a fruit salad like that would have been a great solution! Besides, the apple cut into a spiral on a stick seemed to be very tasty… too bad I’m allergic to all the fruits there! Isabel also couldn’t take it as she could have send me to the hospital with just a kiss! 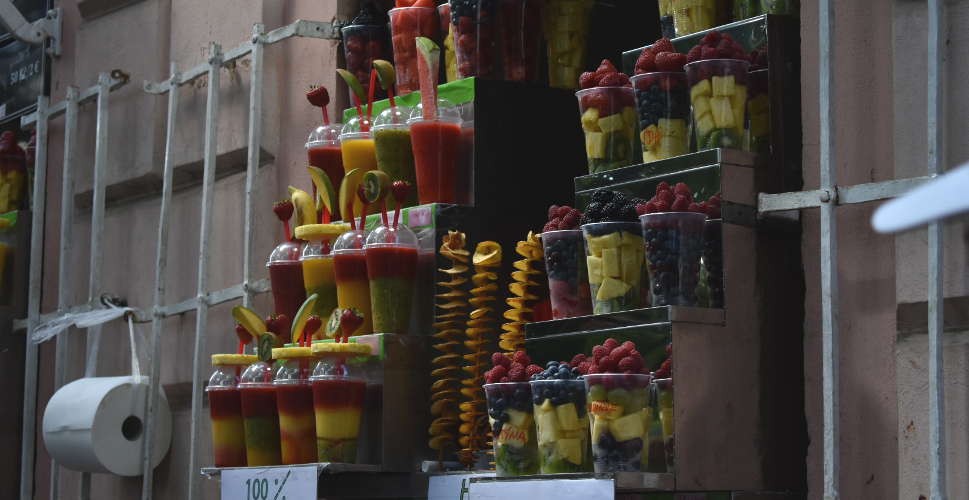 When we got back home, around 4pm, we made a Cuban rice (this is how we call in Spain the rice with fried egg and tomato sauce) and we took a nap.

In the afternoon we wanted to go see the Miminka Babies, one of the most chilling sculptures we have ever seen! They are on the Zizkov Television Tower. In the distance, it seems that ants are climbing the tower, but when you are closer, you realize that they are babies without faces. Actually, they have a bar code literally stamped on their faces. You will also find them crawling near John Lenon’s wall, on the other side of the river, on U Sovových mlýnů 2 street.

From the tower, we walked back to the “Tančící dům” (Dancing House) in Rašínovo nábřeží 80. They are so cool! Also, on that same street the view of the river and the houses is perfect. Besides, we were surprised of having such good weather!

Then we walked to the wall of John Lenon, in the square Velkopřevorské náměstí. This is an interesting site because of its origins and the meaning it has, not only because it is a monument to this Beatle, but because it represents the freedom of expression of an oppressed people, at that time, by the communist authorities.

Just for the sake of our traditions, we ended up next to the bridge, watching the sunset again and thinking about the Free tour that we would do the next day. This time we would do it through the Jewish neighborhood.

With the sun behind the horizon, we returned to take dinner at home. This time we prepared some hamburgers with cheese, cherry tomatoes and olives that made us feel great. And for dessert, some strawberries that we bought at the Albert supermarket. Dipping them into Nutella were the best way to end the day. 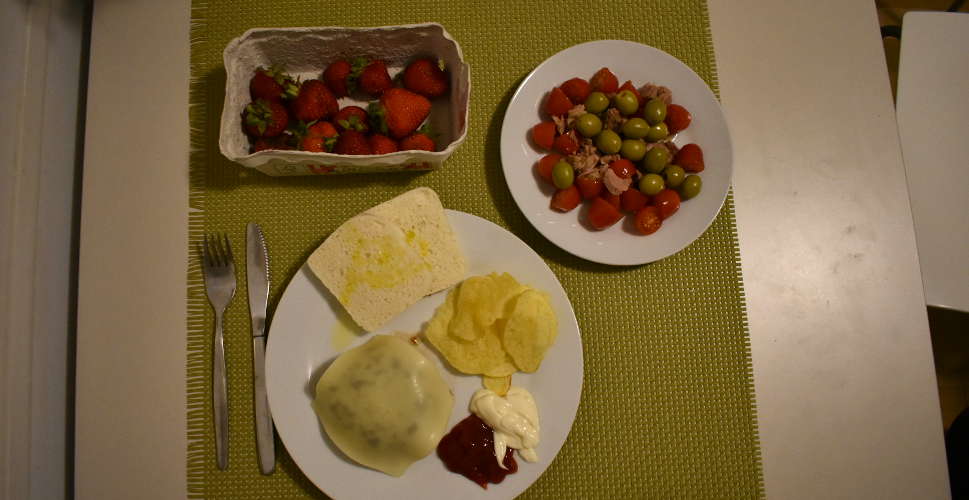 The last day in Prague! And we had the brilliant idea of waking up at 5 o’clock in the morning to see the sun rise from the Charles Bridge… it was wonderful! I admit it… but it was also very hard to get up so early.

When we returned home, we ate a gluten free toast with Nutella and went to sleep until 11am. The Free Tour started at noon and we wanted to prepare some sandwiches, since the tour lasted almost 3h. 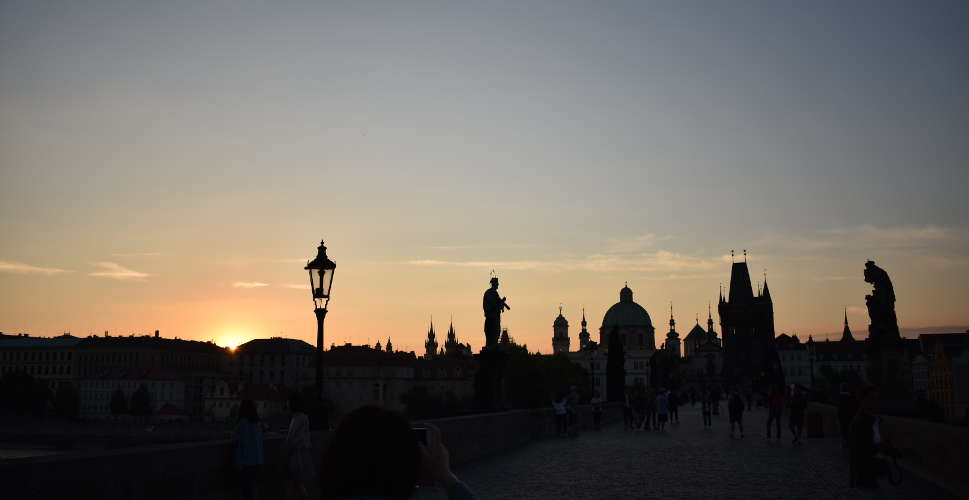 We will not give many more details of the tour because we have already wrote a lot but, another interesting fact that we took from the tour is that, if you look at all the street lamps in the city, you will find they have a number. According to what the guide explained, this serves to indicate the exact location to the emergency services. 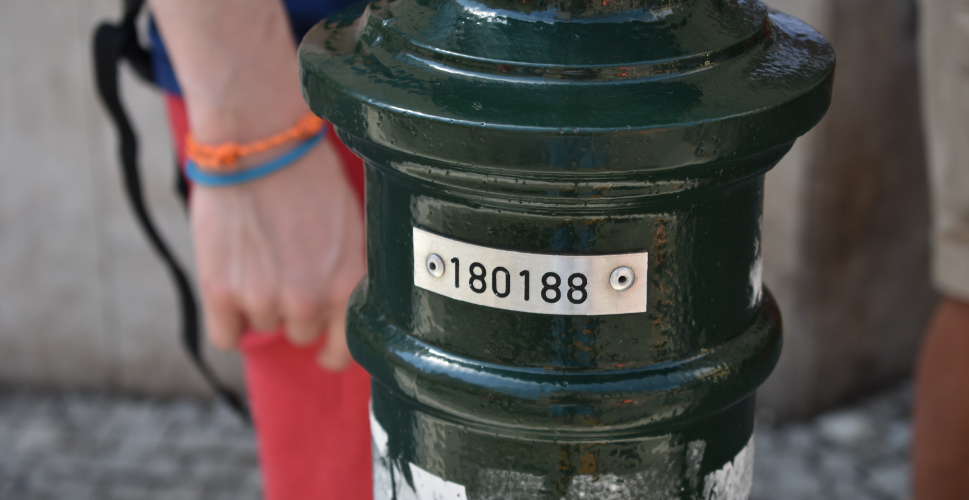 Apart, the guide also told us about tips in restaurants. Unlike Spain, you should not leave the money on the table when you leave. Nor give it to the waiter. Normally it is rounded up, adding 10% of the cost of the bill. You must indicate the tip when they will charge you. In case you have not been happy, give him a figure that forces him to seek change. 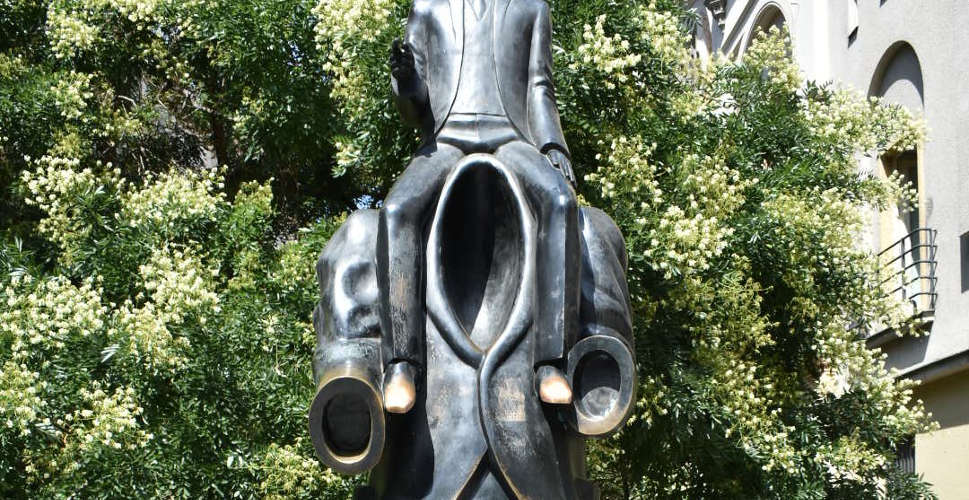 If apart from touching h John of Nepomuk and the fertilizer bright penis you want to even more lucky, look for the statue of Kafka to touch his shoes. We also did it just in case. In the end, we needed luck to have good weather for the rest of the trip. And it seems that, more or less, it worked! 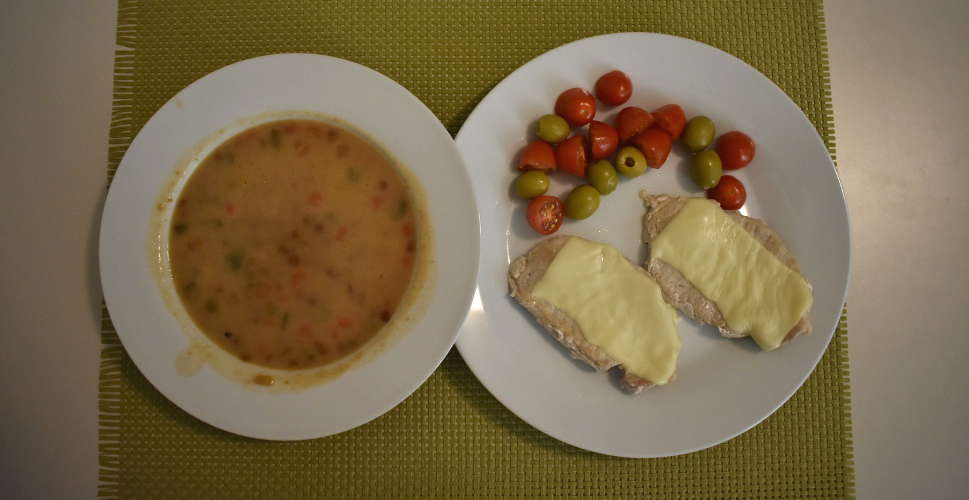 Again we ate late. This time some lentils with vegetables and pork loin with cheese and cherry tomatoes. We spent the rest of the afternoon resting because we wanted to go to the Pub Crowl. This is another night tour where they take you to pubs and discos. It is good to meet young people.

Although we wanted to go out a bit, finally we decided not to. The next day we had to drive until Hallstatt, the prettiest town in Austria, and we had a few hours by car. We should rest!

AND HERE WE LEAVE THE CELIAC TRAVEL CARD IN CZECH: