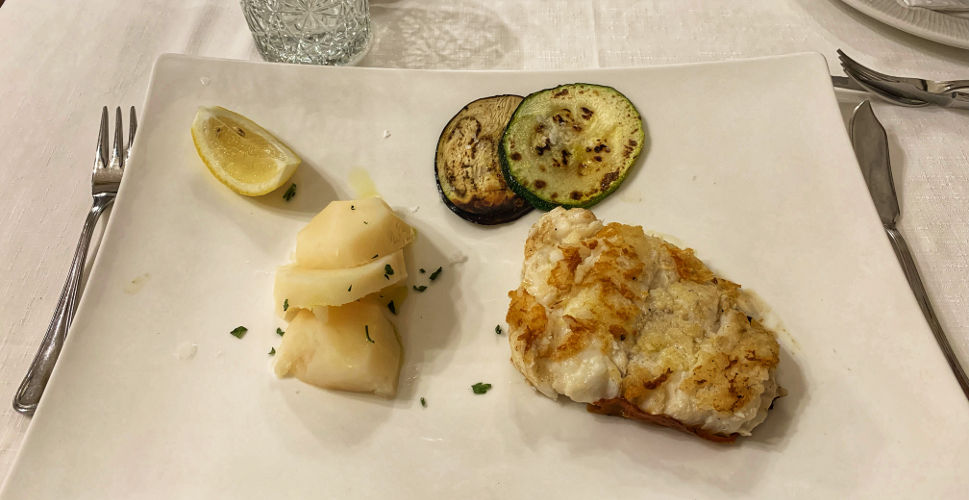 Ribadeo: visiting Playa de las Catedrales, Isla Pancha and a question from the waiter that gives me a lot to think about…

Although we had little time – and this forced us to go much faster than we like to travel – the trip was going great. We had stopped “for dinner” in Logroño and, after two days in one of the most beautiful gluten-free paradises in Spain (Moal and Cangas del Narcea), this time we were on our way to discover the gluten-free restaurants in Ribadeo.

After a good breakfast, we left Casa Xuaquín with the promise that we had to come back. Isabel, the landlady, had treated us wonderfully. Besides, the last gluten-free breakfast she had prepared for us had been great too. 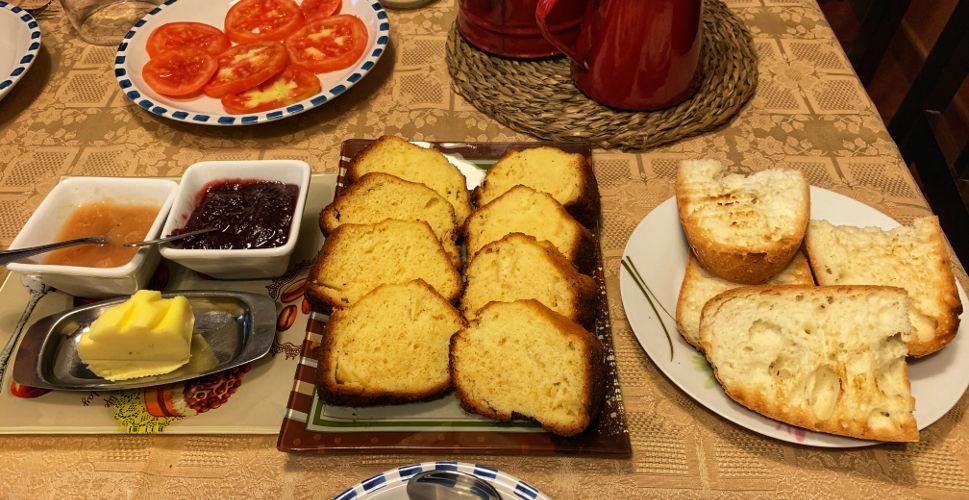 We left with a smile from ear to ear! The experience at Casa Xuaquin had been great. In addition, we had been able to enjoy the Muniellos Forest and get to know several gluten-free restaurants in Cangas del Narcea.

Although Playa de las Catedrales was only a 2-hour drive away, we were leaving Moal late… we wanted to spend a long time on that beach with that attractive name, The beach of the Cathedrals! Sounds magnificent, doesn’t it?

We arrived and, as expected, there were a lot of people! Upon arrival, we were glad we had an off-road car. We left the car climbing a hill. 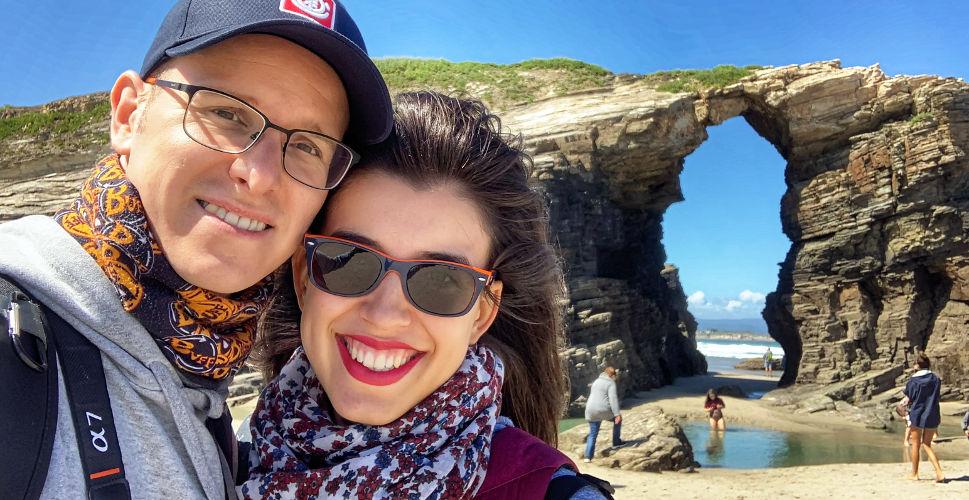 Seeing how many people were there, we decided to take our tripod. We wanted to try to take a picture without people… how? Isa had seen a tutorial explaining it: basically we had to set up the tripod, frame it and shoot several photos with the longest possible exposure. Then, by stacking those photos, the same editing program would eliminate the people. Amazing! We spent quite a while taking pictures of those beautiful arches. Now, reviewing the photos of the trip, they have reminded me of those of La Sagrada Familia, in Barcelona! 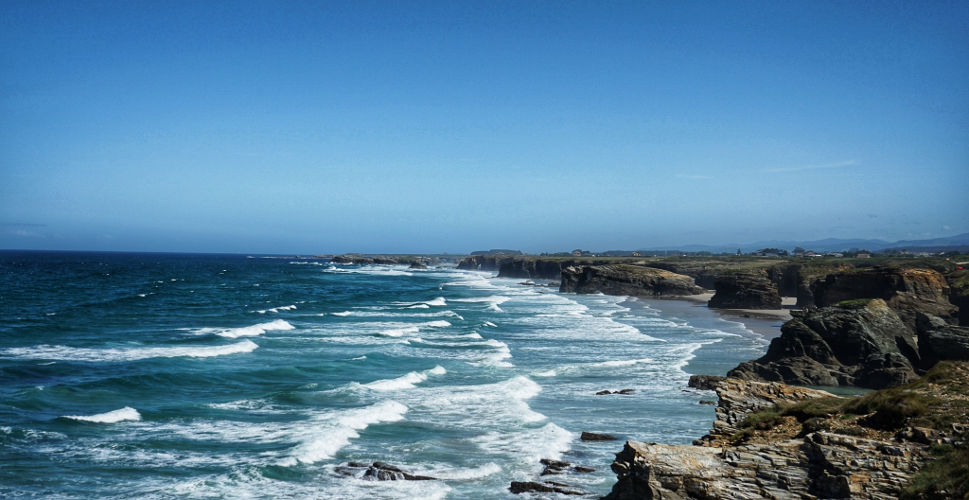 The photo didn’t come out well… I didn’t set long exposure haha! You will be able to see it soon on Instagram. Even though we were starving, we didn’t want to leave that beach… we walked through the arches and the different stones and “islets” that were exposed at low tide. It was amazing!

When we finally decided to head back to the car, we didn’t make it! A wooden walkway caught our attention. As we followed it, we moved away from the beach. We arrived at a small watchpoint, which is in front of another parking lot, from which we could see a breathtaking panorama. To stay starving was worth it when we saw that view! When we got back to the car, it was too late to look for gluten-free restaurants near Playa de las Catedrales… We opened the fridge in the car, took out some groceries from the just in case shopping, and ate right there. 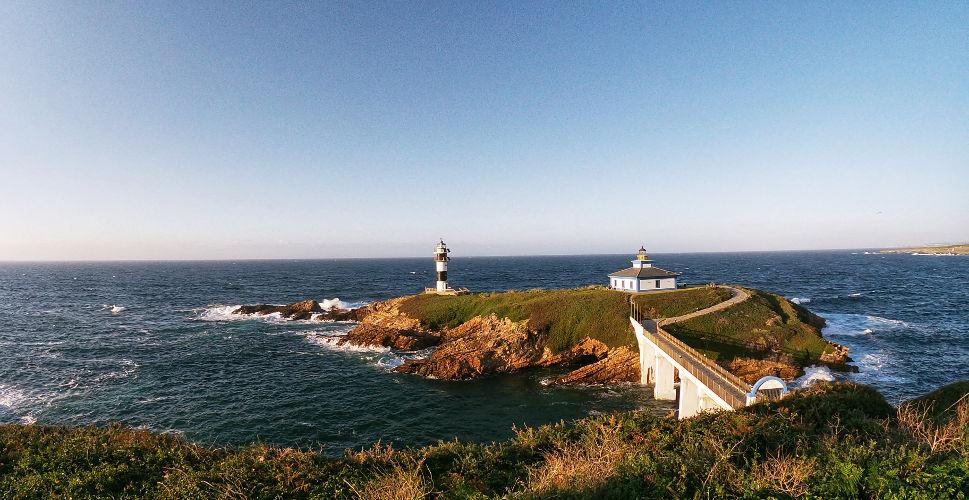 We arrived at the hotel in the middle of the afternoon. We were staying at the O Cabazo Hotel, a very cozy hotel in the upper part of Ribadeo. The truth is that the room was very nice and the restaurant menu looked very good. We explained our celiac condition and they told us there was no problem. We booked a table for dinner there.

After a walk through the town, we went back to get the car to go see the sunset from Isla Pancha. We parked before the bridge and walked to the lighthouse. It was very beautiful view! We were dying to see a sunset over the sea, it was amazing! Note: for those of you who live on the West Coast all the sunsets are like this… but those of us who live in the East, to see the sun in the sea we have to get up quite early… this makes it a little bit harder! 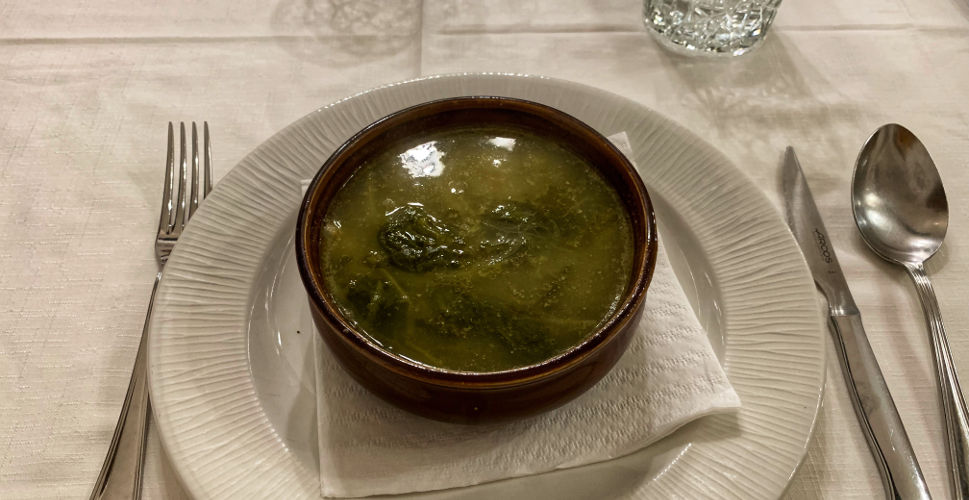 When we got back to the hotel, we felt like having something hot for dinner. In Isla Pancha we had been totally exposed to the wind and we got really cold… we decided to start with a Galician broth. We took one each. It was really comforting to have that broth with vegetables, beans, boiled potatoes and a little piece of chorizo.

As main course, Isa opted for a baked hake. The waiter recommended another fish to me but unfortunately I couldn’t say yes. I explained that I am allergic to fish and ordered the chicken in sauce that I had seen on the menu. Immediately after, the waiter asked me a question that gave me a lot to think about… He asked me, “Are you allergic or you just don’t like it?”.

The truth is that I wasn’t expecting this question at all… if I didn’t like fish, I had other options to choose from…. right? I insisted that I am allergic to fish and showed him the epipen I carry whenever I travel. He nodded, took note of the chicken in sauce and told me the potatoes would be boiled instead of fried.

After giving it a few thoughts, I realized that sometimes the term “allergy” is used without much thought. If you don’t like it and a drop of oil from that fish falls on your plate, you may not notice it and nothing will happen to you even if you dip all the bread on the table in the sauce. On the other hand, if you are allergic, that drop containing the allergen can kill you.

By communicating an allergy we force the kitchen to take a series of measures that, if poorly implemented, can have dire consequences for the diner… the fact of camouflaging a simple “I don’t like it” can force them to do more work than they should really do. In an extreme case, it can even cause the kitchen to relax after many “dislikes” camouflaged under made-up allergies.

After a delicious dessert of vanilla and chocolate ice cream, we closed the day! 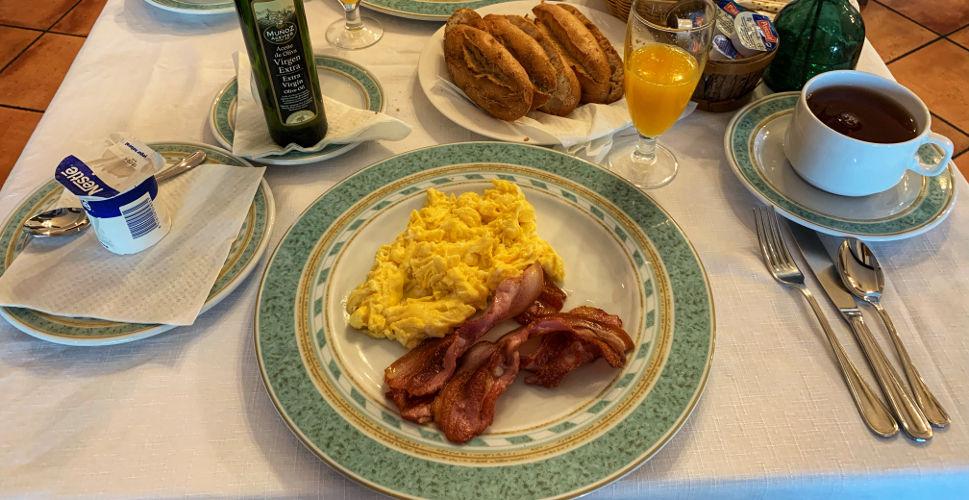 The next day, following the frenetic pace of travel, we were going to Ferrol. The O Cabazo is one of those hotels where you order breakfast a la carte and they bring it to you freshly made. This is something I love! I ordered scrambled eggs with bacon, gluten-free bread, orange juice and a yogurt. I love starting the day with energy!

That day we headed towards the cliffs of Vixia Herbeira, stopping first in Cedeira to discover a beautiful cove.

AND HERE IN GALICIAN: