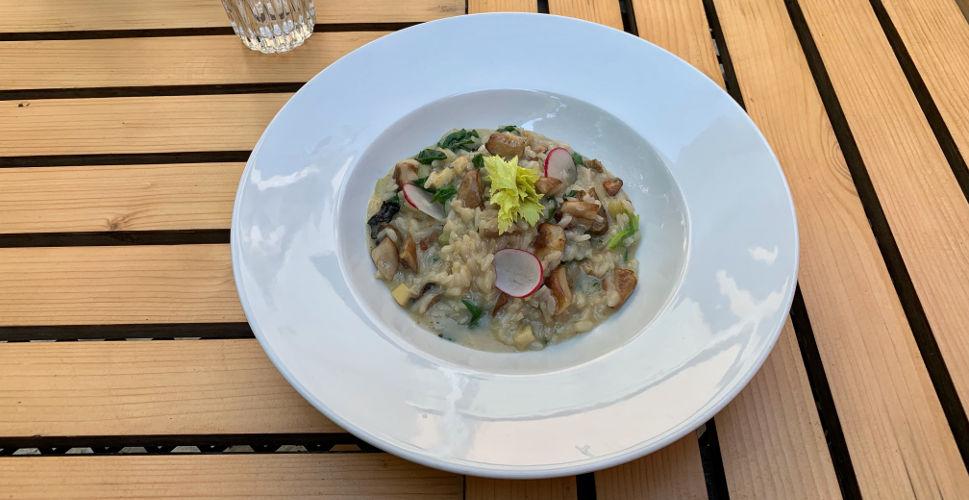 Sofia: my first experience with the gluten-free Soul Kitchen movement

As it could not be in another way, I got up early again to go on another gluten-free trip… this time back to the East, back to Bulgaria. This time I would discover gluten-free restaurants in Sofia! It was also springtime! As always when I flew to Eastern Europe – to countries like Bosnia, Croatia or Serbia – I stopped off in Rome. And so I flew with Alitalia… knowing this, I got up at 3 o’clock in the morning so that I could prepare my sandwiches, because on the flight to Rome I already knew that I would not get anything gluten-free. Although I know that Alitalia does not have gluten-free snacks, every time I fly with them I am surprised. Italy is a very celiac-friendly country! Why is their airline so insensitive? On the second flight, with Bulgaria Air, I didn’t know if they would have anything gluten-free so I also prepared something for that second flight and went prepared. 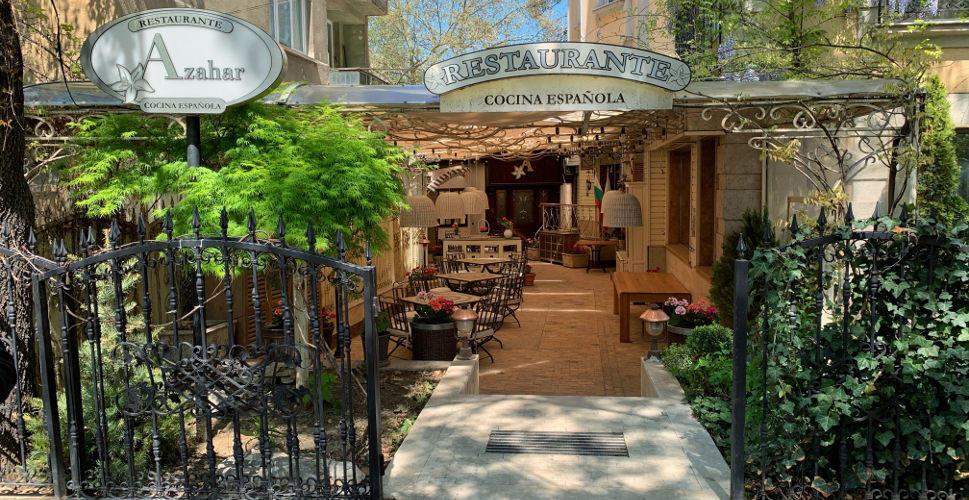 When I boarded the second flight, I found a bottle of water in my seat. It was starting out fine! But it was all here… during the trip they handed out snacks. When the stewardess came to me, I asked her if they had anything gluten-free. It’s a bit frustrating: the agency that booked our flights tells me that “we always inform the airline about your coeliac condition“, and the hostesses always tell me that “next time I’ll tell them in the booking so that they can prepare a special menu”. I don’t know who’s doing it wrong, but in the end it’s me who’s not eating!

They say “careful man, it’s worth two” and luckily I had prepared a gluten free sandwich for that flight too. 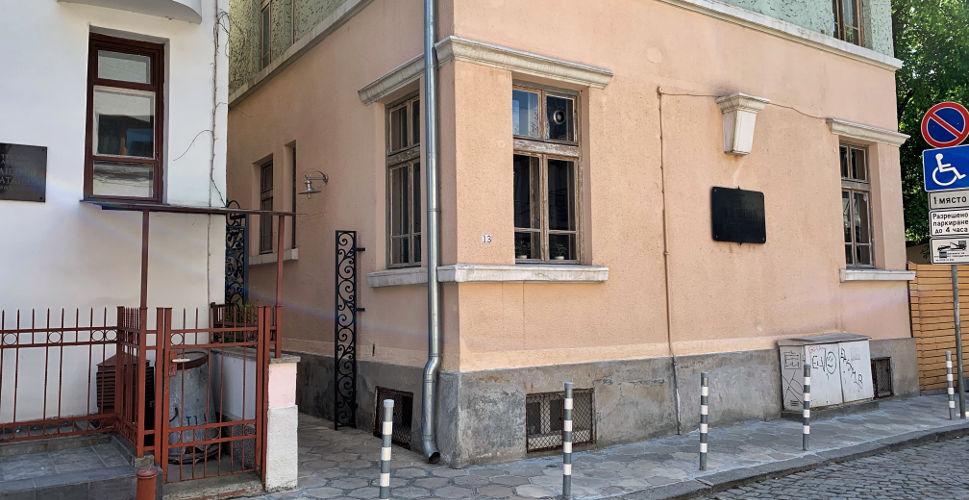 When I arrived, Trifon was already waiting for me at the airport. I was very happy to see him again. He had helped me a lot in February when I visited Plovdiv (also in Bulgaria) and I knew that this time he would take me to good gluten-free restaurants in Sofia.

When we arrived at the Best Western Lozenets hotel, we were told that the room was not ready. We left the car there and went for a walk in search of a place to eat gluten-free.

Unfortunately, Trifon had not been as lucky as in Plovdiv, and although he had a couple of gluten-free options in mind, we had a bit of a hard time finding a gluten-free restaurant in Sofia. 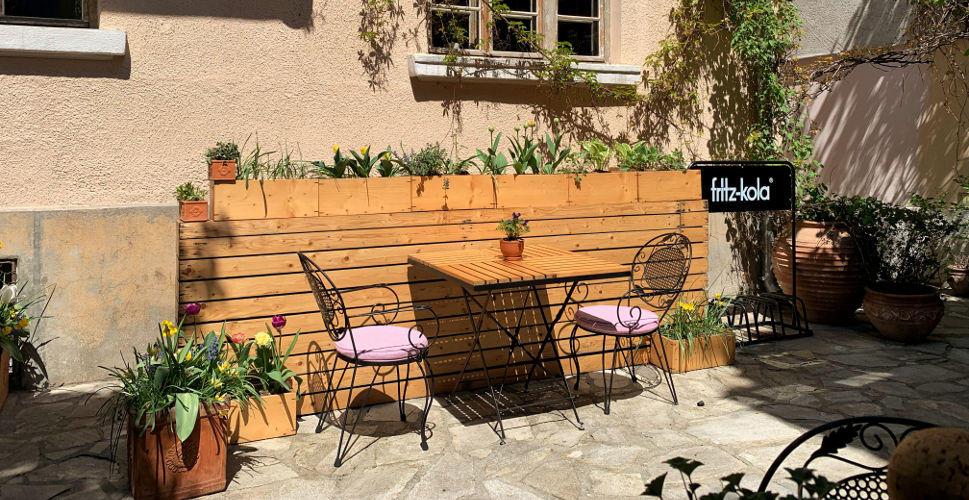 There was no Association of Coeliacs in Bulgaria, so the references I had found were not checked. “This happens to me in many countries” I thought… unfortunately, not all countries have such committed associations as in Austria, Spain or Italy…

We discarded a brewery and, a little later, we found a restaurant with Spanish cuisine. It was called Azahar. We went in to ask and I showed the Bulgarian gluten-free travel card. The waiter answered that they couldn’t offer us anything… what a pity! Although I always prefer to eat the typical food of the countries I visit, I admit that I would have been happy to eat Spanish food in Bulgaria. 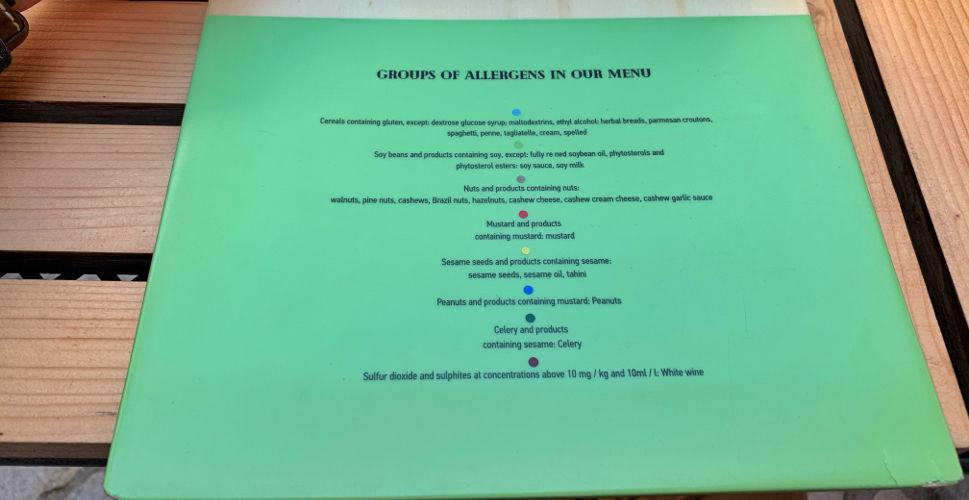 Finally, Trifon found the first of the gluten-free restaurants in Sofia I would try. It’s called Soul Kitchen at 13 Kokiche Street in Sofia. It was a vegan restaurant. On the outside the restaurant was not nearly as attractive as on the inside. The temperature was perfect and we decided to enjoy the food on the terrace. There were few tables and the sun and the decoration invited to relax and eat well. The name of the restaurant already said it: Soul Kitchen. In addition, at night they must have live music, since there was a small stage.

I admit the menu directions were a little confusing. The little blue circle indicated the products with gluten, but the legend specified the exceptions. Although it seemed that they were sensitive, I showed the coeliac card in Bulgarian again and Trifon gave me a hand to talk to the waitress.

He told us that they also had gluten-free pasta and that we should not worry about cross-contamination.

I took the waitress’ advice and ordered the risotto with boletus and vegetables. Wow! It was delicious! Plus, the quantity was perfect.

After a spectacular meal on that cute little terrace, we went back to the hotel to see if they had the rooms ready. When we arrived at the reception, Trifon reminded them that I am coeliac and that they should have a gluten-free breakfast for me the next day. Companions like that make traveling gluten-free quite easy.

We met up after an hour to go for a walk downtown. This time I could really discover some of the city’s sights. Besides, I was going with a great guide. 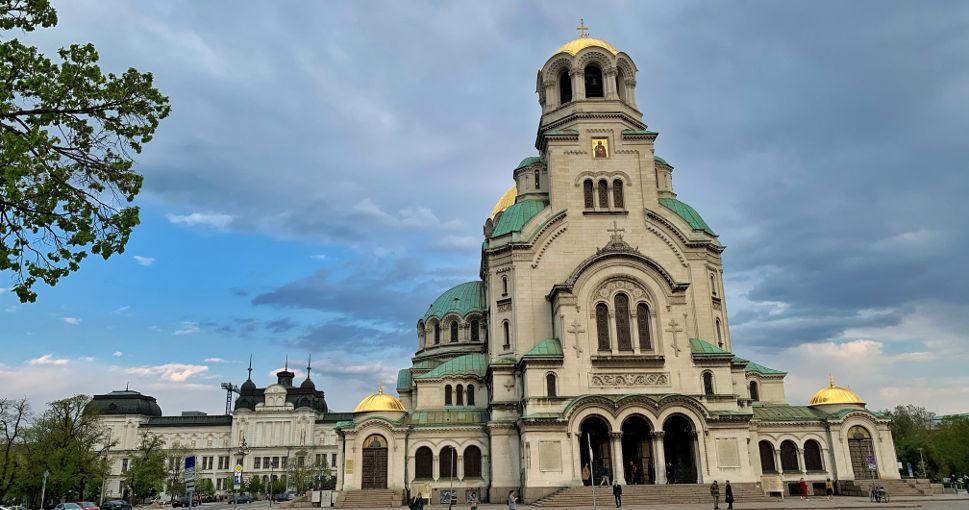 With great pride, he explained to me that the inventors of the alphabet were Cyril and Metodi, two Bulgarians who lived in Thessaloniki (now part of Greece). He took me to see the Cathedral of St. Alexander Nevski in Sofia, an imposing and very well preserved temple. It is also one of the sixty Christian cathedrals and one of the ten largest Orthodox cathedrals in the world. When I entered, I was amazed. The mixture of colours of Italian marble, alabaster and paintings left me amazed. Nothing like the cathedrals I had seen before… which are much more austere. 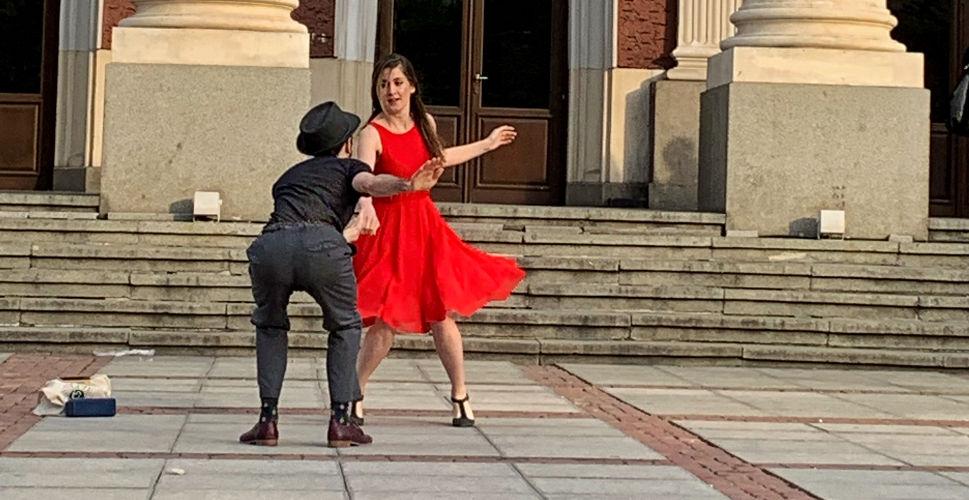 From there we walked to the Parliament. Before arriving, we stopped to see the ruins of the Roman city of Serdica, protected by a very modern gallery. As we continued walking, Trifon was explaining to me the history of some buildings. I found Sofia to be an impressive city. After enjoying the dance of a couple in front of the theatre, we continued walking along a street that reminded me of Maria-Theresien Strasse in Innsbruck.

Then I bought a couple of souvenirs for the display case at home and we got into a taxi to go to the next gluten-free restaurant in Sofia. As a recommendation, in Sofia it is better to call the taxi company instead of stopping one on the street. As Trifon told me, there are some taxis that are not registered and charge exorbitant amounts, especially to tourists. 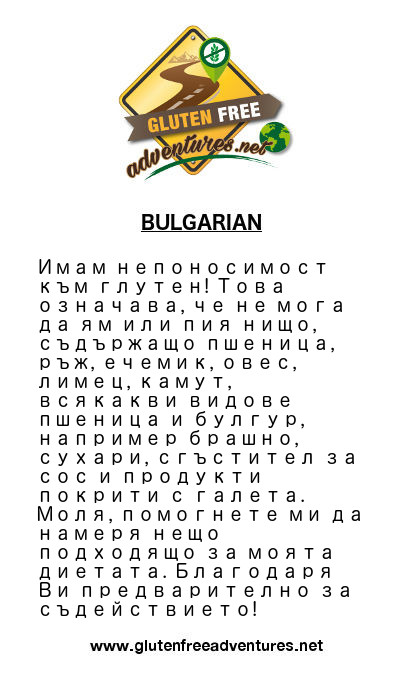