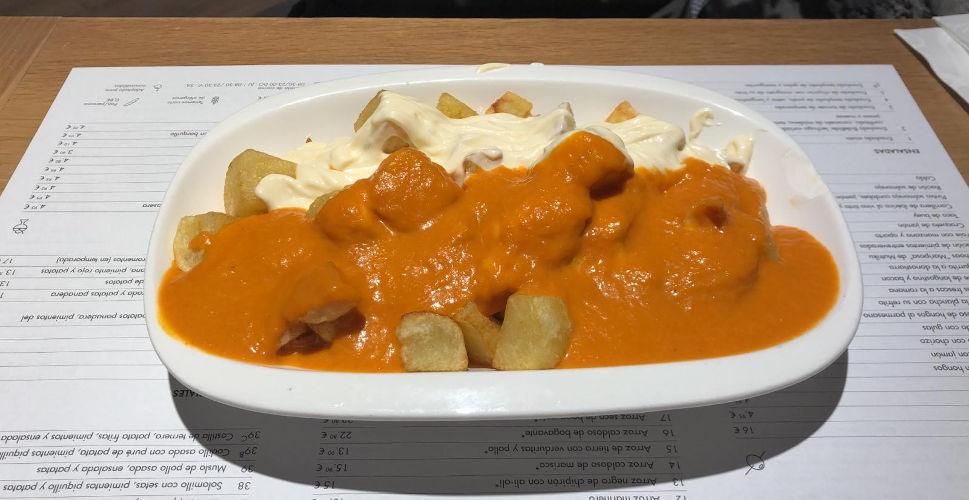 TOLOSA: a perfect place to visit the beaches of Biscay and enjoy the gluten-free cuisine of the area

We woke up in the Parador de Potes with a wonderful day, all clear! I wish we had had this weather in the previous days… We were surrounded by beautiful mountain views. While we were having breakfast, we debated between going up with the cable car to see the whole valley or continuing with the trip as we had planned it… Although it was a difficult decision, we decided to continue with the trip to discover the gluten-free restaurants in Tolosa. After all, we wanted to return later to see the Brown Bear Monument as well, fog-free. 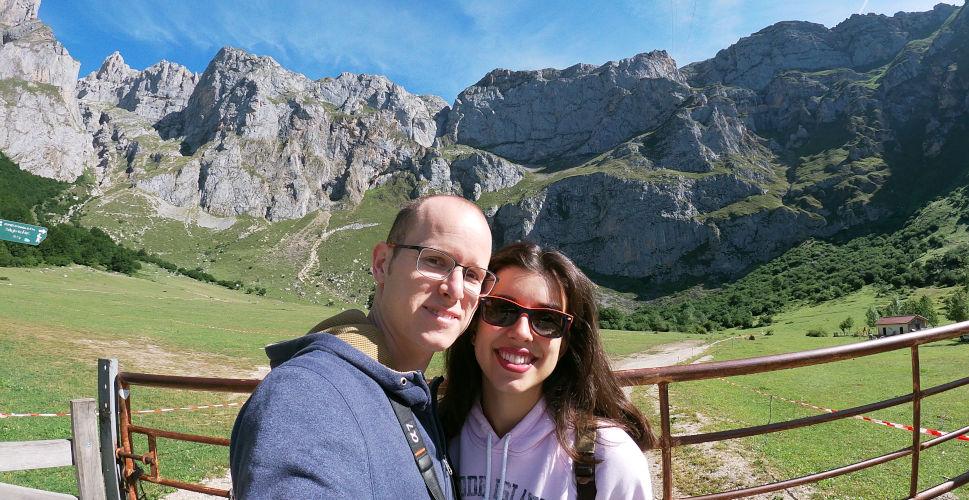 (Before we go any further, I apologize for the photos, especially of the food… I don’t know what happened that I didn’t safe them well and I lost most of them. Another excuse to come back!)

We had 3h driving until we reached our next destination: San Juan de Gaztelugatxe. Driving through this area of Spain is magnificent because the landscape is wonderful. With roads like this, 3 hours fly by. 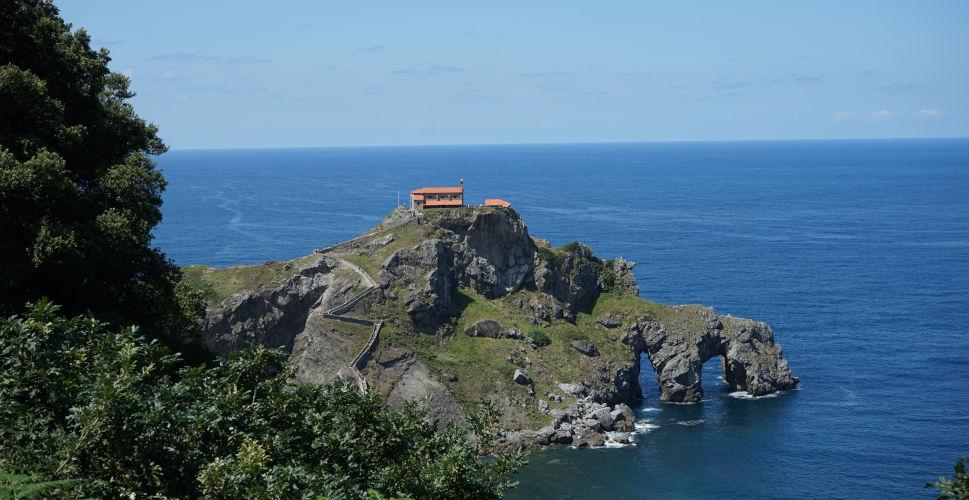 With the car parked, we walked to the viewpoint to admire the island from afar. There we took the opportunity to eat the picnic that had been prepared for us at the hotel.

At the entrance of the road, we were stopped at the ticket office. We didn’t know that access was free (we went last year). We also didn’t know that we had to get a ticket. I guess they do it to have a controlled capacity. 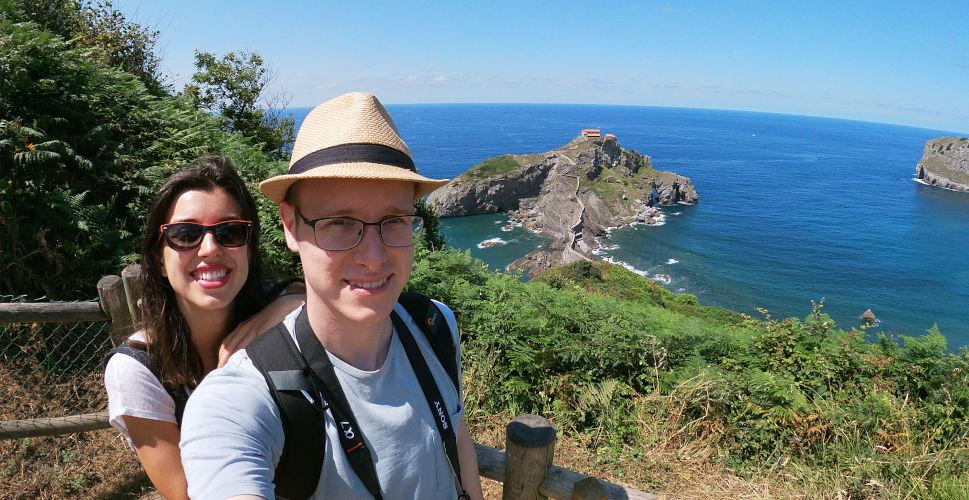 The guy at the ticket booth was very nice to us and took our ticket out while he explained everything we needed to know to get to the chapel.

The path to the islet is amazing! You go down a winding slope – with a fairly steep inclination in some sections – that offers you beautiful views of the bay. 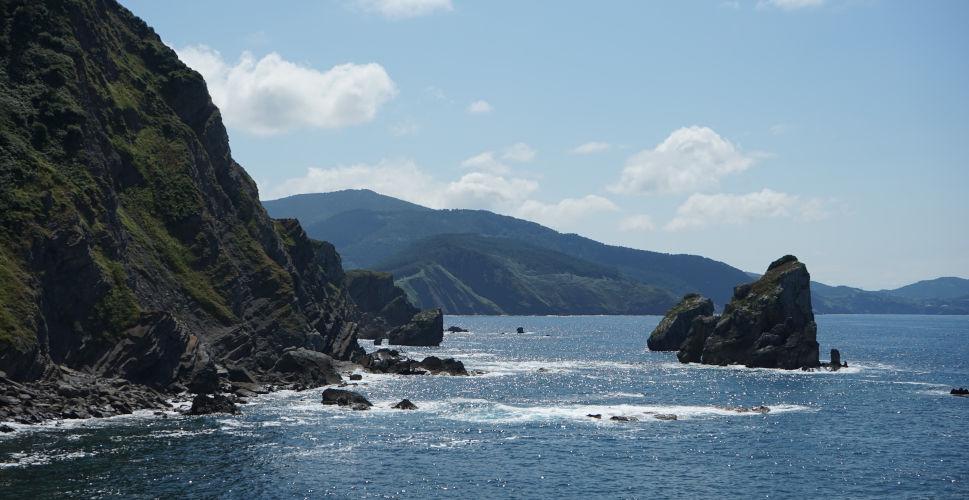 When we arrived downstairs, a smile was drawn on our faces when we could see the bridge and the path to the chapel. Also, there were not many people. However, it was very hot and the climb was a bit hard, so we were lucky to have water with us! When we got to the top, we went around the islet. The views from there are very nice too! We had a good time contemplating the panorama. Then Isa rang the “lucky bell” and we started to go back to continue to Tolosa.

I recommend that you go with comfortable walking shoes. We saw some tourists who were having a bit of a bad time with the flip-flops… 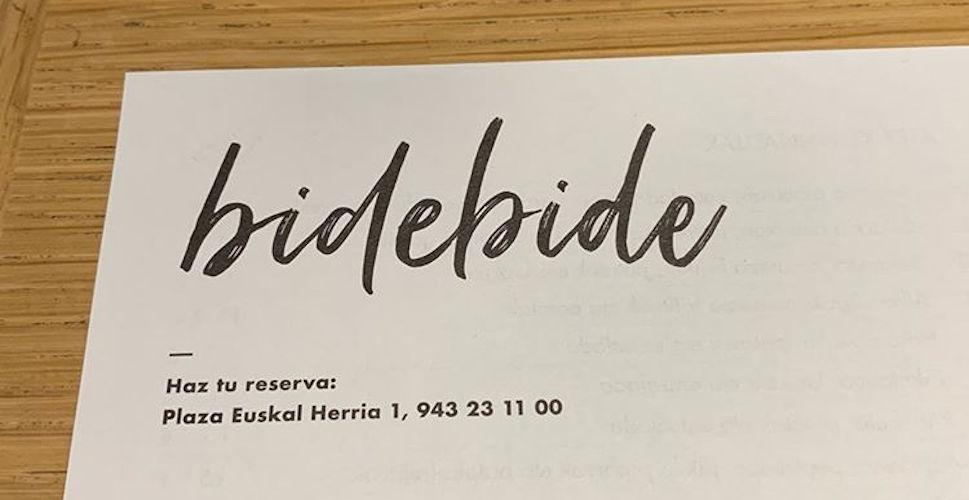 We had the hotel in the heart of Tolosa. We were staying at the Hotel Bide Bide in Plaza Euskal Herria 1. We left the car in front of the back door and, after unloading our suitcases, we went to the parking lot that had been recommended to us. Before leaving, we took the opportunity to ask them if they knew of any gluten-free restaurants in Tolosa. They recommended us their own restaurant, right next to the hotel, under the porches that surround the square. There was a very lively atmosphere!

I had run out of lactase pills, so once we were settled in, we went for a walk downtown in search of a pharmacy. 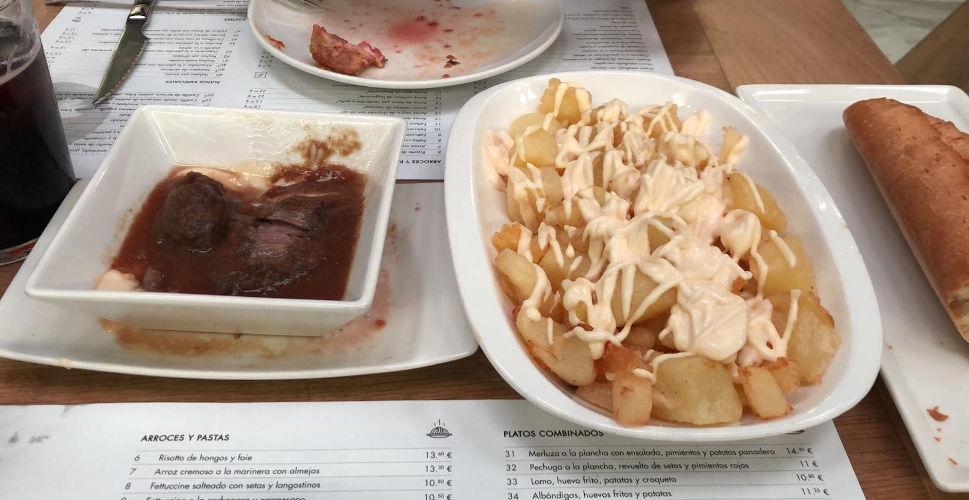 Already in the restaurant we were served by Ane, a super nice waitress. We explained to her that we have celiac disease and asked her to recommend options. We thought she was very familiar with coeliac condition. We decided to have tapas and rations for dinner.

We started with the patatas bravioli! We loved the name! It was a very simple dish: chips with salsa brava and aioli – perfect for a start! 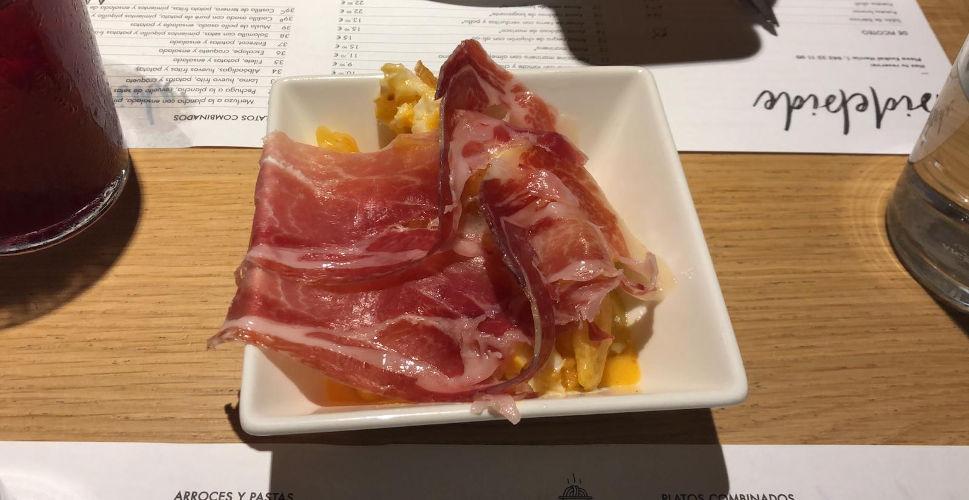 Then we ordered some eggs with ham, delicious too! To follow with a tapa of foie gras with apple and Porto wine sauce, this one was really good! In addition, the gluten free bread they brought us was very well toasted and it went wonderfully with this tapa. We finished off our dinner with an beef taco.

We slept great! The night before we charged dinner into the room and Ane recommended that before we left the restaurant, we inform them if we wanted to have breakfast there so that they could have the bread ready for the next day.

We had a super complete breakfast! A loaf of bread with butter and jam each, a yogurt, an orange juice and a coffee. 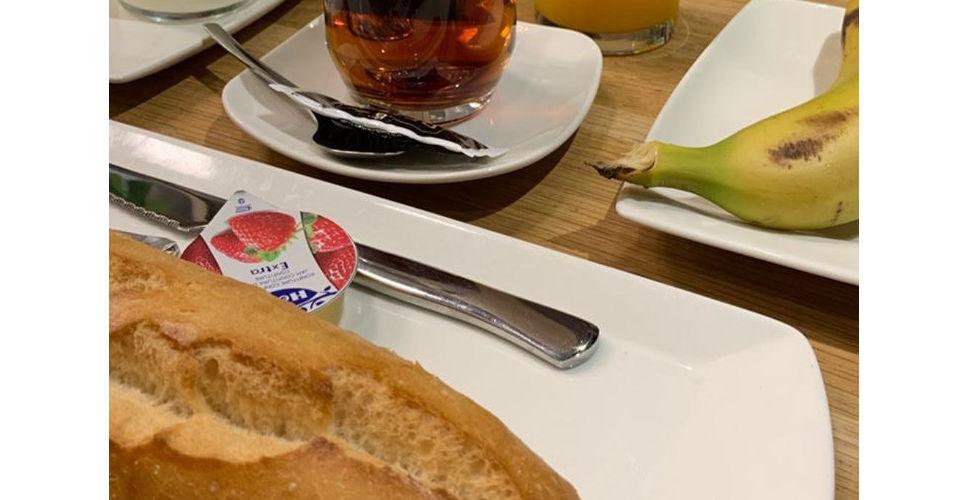 That day we wanted to see some very special beaches! The first one was Sakoneta Beach, right in the middle between Deva and Zumaya. Simply… Wow! As we drove there we passed by an impressive winding road. And, when it seemed that we had gotten lost… we reached the end of the paved road… there were two camper vans parked there and we left our car next to them. 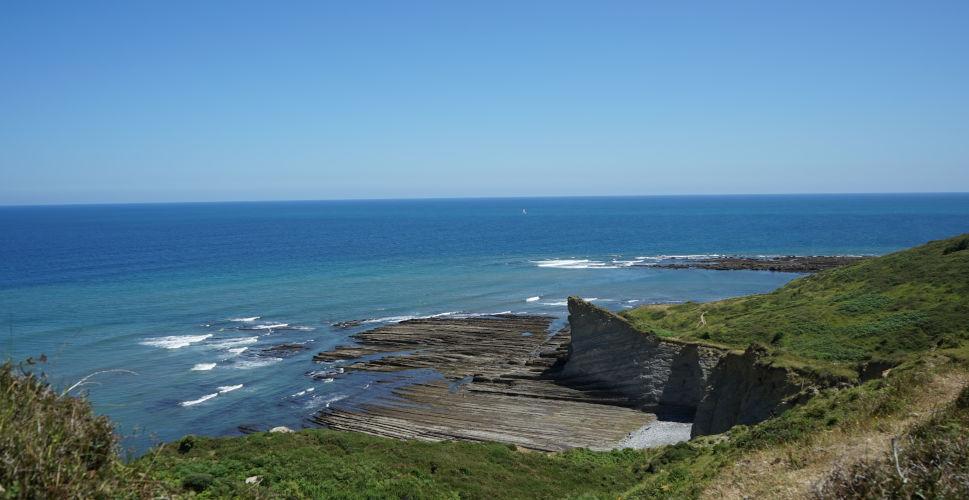 Two trails started from the place where we had parked. One went directly down to one of the beaches. The other one went along the top of the beaches towards Sakoneta. I don’t remember if there were any signs indicating the direction we should take. I would say no. To give you an idea, the road that led to Sakoneta was the widest, the one after the roadblock that prevented motor vehicles from passing. 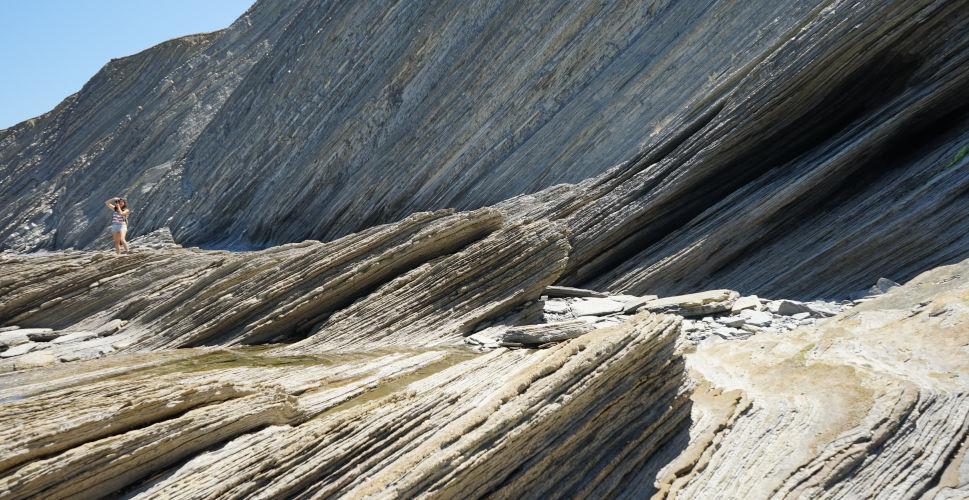 Again, we walked for a while under the scorching sun. Although the wind made the walk pleasant from time to time, I recommend that you take a good supply of water… and sun protection! As we walked down the path this one became narrower and narrower. Also, it was getting closer and closer to the edge of the cliff that separated us from the rocky beaches. The swell was impressive! 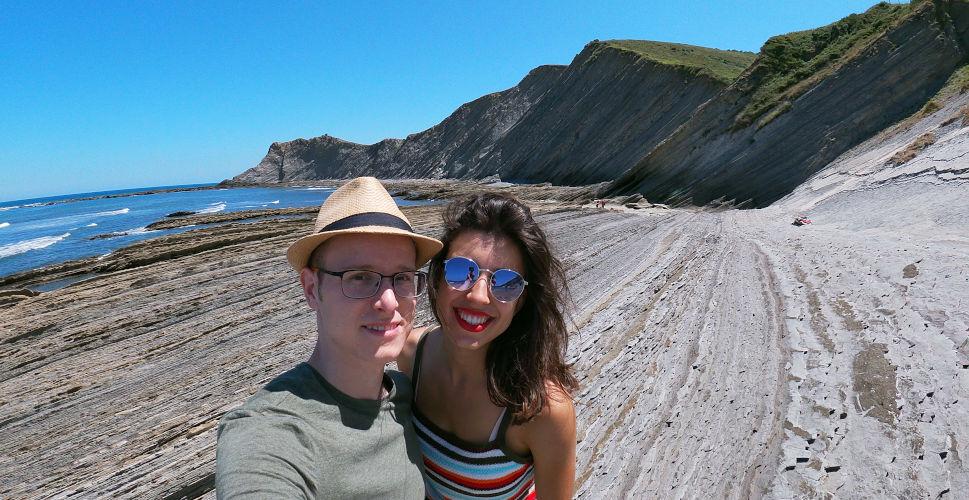 We could say that it is a paradise beach! Of course, it has no palm trees, crystal clear waters or fine sand… but the feeling of tranquility and isolation is worth it. Besides, if you like photography it is a very interesting place to go.

To get down, we had to descend as if we were rappelling, holding on to a rope. A little adrenaline rush before seeing you in the middle of that beach that looks like the result of a pile of stone sheets after falling. IMPORTANT: be very careful with the tide, it goes up very high and very fast here!

When we’re in places like this, it seems like time speeds up! Suddenly, we realized that it was 3h in the afternoon… we cleared the road and, around 4h, we got to the car. It was too late to start looking for gluten-free restaurants around, so we decided to take out the picnic table, open Jolly’s fridge (our all-terrain vehicle) and eat there.

When we finish eating, we head towards Itzurun (San Telmo). This is a town that was already famous for its beach, very similar to that of Sakoneta. Others, perhaps discovered it thanks to the film “8 Basque surnames”, since the wedding was recorded in their hermitage at the edge of the cliff.

Unfortunately, we had a hard time parking and by the time we got to the beach, the tide was already too high to get a good look at it.

We spent some time looking at the chapel. Then, we returned to the car to get back to Tolosa at a reasonable time to take a shower, rest a bit and go down to have dinner again at the Bide Bide in Euskal Herria Square.

That night Ane wasn’t there… although the waitress who served us wasn’t as nice as she was, we enjoyed the food just as much. The Bravioli potatoes were a must. Then we went with the beef taco we had ordered the night before and tried the pork cheek cap. It was so good that we repeated!