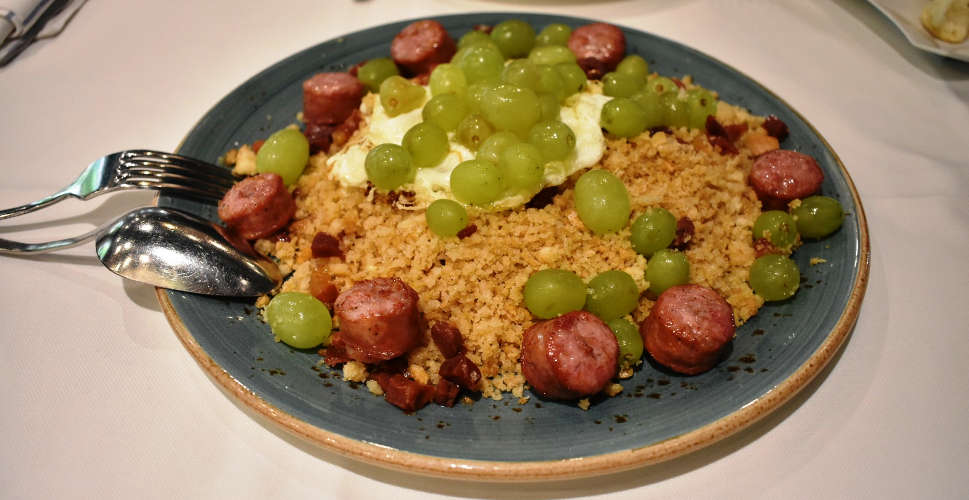 After a gluten free weekend in Cuenca, it was time to spend a weekend in Zaragoza! 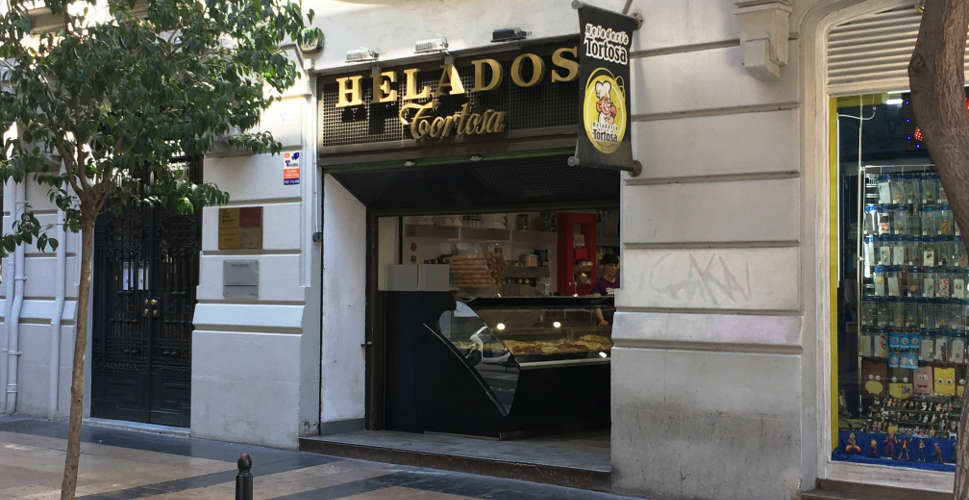 We arrived in the city at past 6 o’clock in the afternoon. Once settled in the hotel Zentro, we went for a walk and… when it is so hot, the only thing you fancy is something fresh. Although I moved from Zaragoza four years ago, I remembered that on Don Jaime I Street there was an ice cream shop where they had gluten-free ice cream. This ice cream shop is called Helados Tortosa, and is at number 35 of this street.

When entering the ice cream shop, it is easy to identify which ice cream is gluten free because you will find the symbol next to each of the names. As expected, when ordering a gluten-free cone, they activated the protocol: they washed their hands, tools and turned away the ice cream started to avoid cross-contamination. To vary a little, I ordered an ice cream of vanilla and caramel on a gluten free cone and Isabel a horchata (tiger nut milk drink). This ice-cream shop reminded me of the Dino Ice-Cream Shop I wrote about recently. Personally I like their ice cream more because they are more creamy and, in addition, in Dino have all gluten-full ice creams grouped underneath all the cookies to further reduce even more the risk of cross contamination. In the Plaza del Pilar you will find one with a terrace. 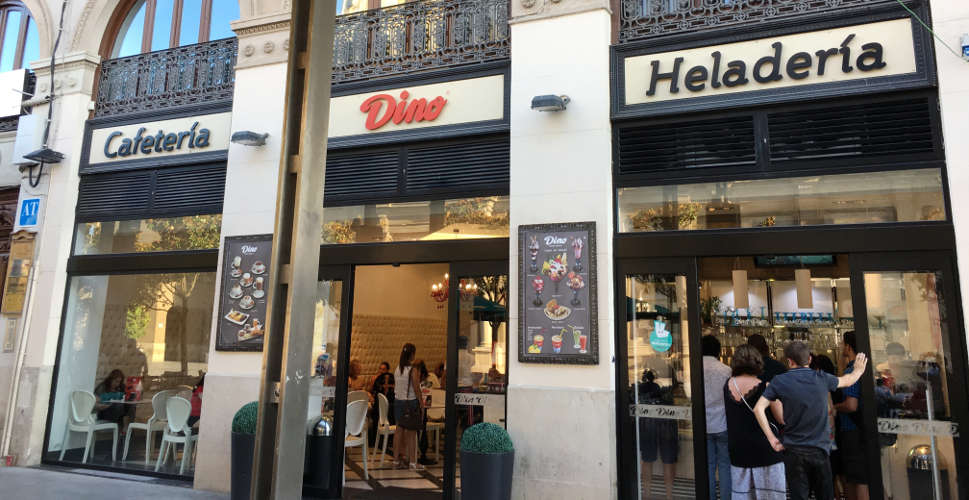 Continuing down the Don Jaime I Street, we reach the Plaza del Pilar, where we left the Seo to the right and, the Basilica of Our Lady of Pilar, stunning at our left. We decided to go a little further to see it from the Stone Bridge. From there you can see the Basilica just in front of the river Ebro. Besides, on that weekend there was a great atmosphere around this area as they celebrated a medieval fair. 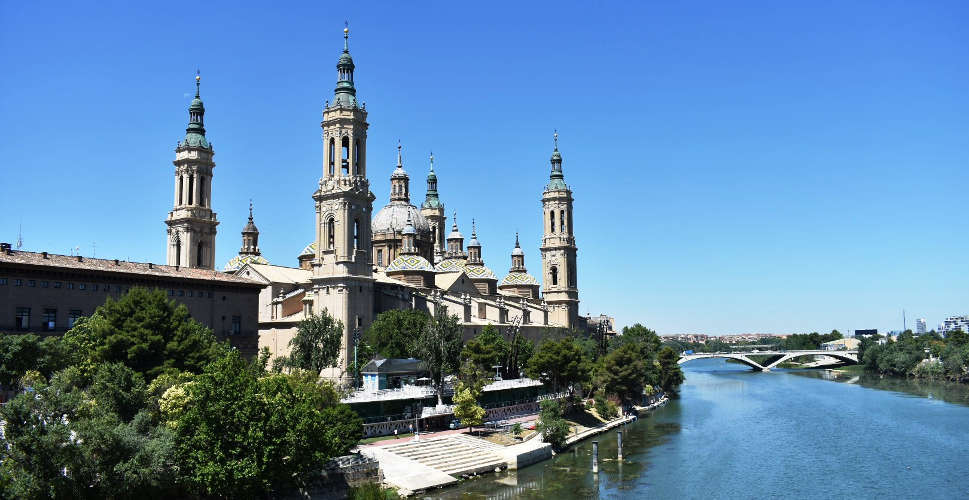 Having met the first objective (the ice cream shop), we took the opportunity to take a walk along Alfonso I street until Paseo Independencia and from there, walking along this wide walk, we reached the old University of Medicine. It was around nine in the evening when we decided to start walking towards the Restaurante Bodega El Morrudo at 58 of Azoque Street, a very small establishment where you can eat really good gluten free tapas and delicious gluten-free rations. That night I think that’s when we settled the rule of that weekend: each meal would be a feast. 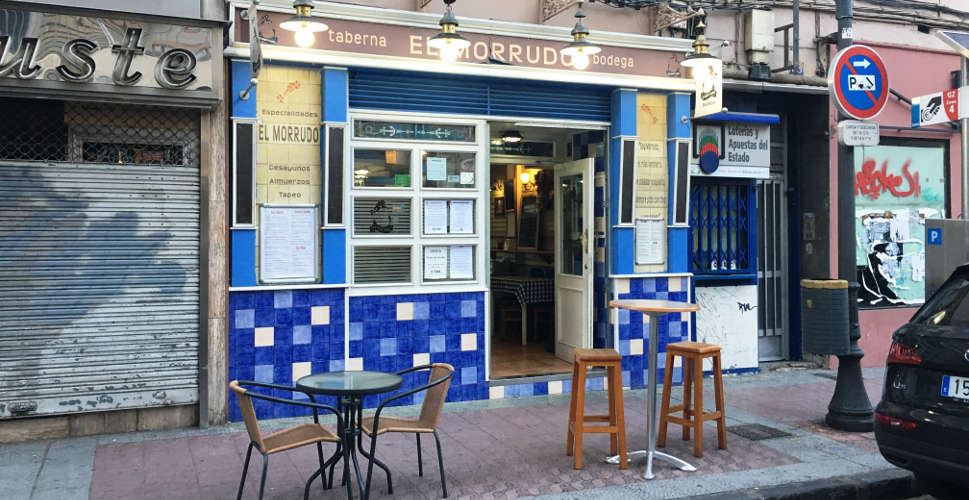 When the girl brought us the suggestion sheet (where everything was gluten free) and the menu of tapas and rations, we saw that all the allergens were well indicated. Even so, we commented that we were both celiac and that I could not take fish because it also gives me allergy. After asking for some dishes, in view of the indecision and taking into account how hungry we were at that time, we took the easiest path and we started to order: first came the Musaka of Ternasco (a tapa of aubergine, bechamel and Ternasco of Aragon with a starflower sauce that was delicious); 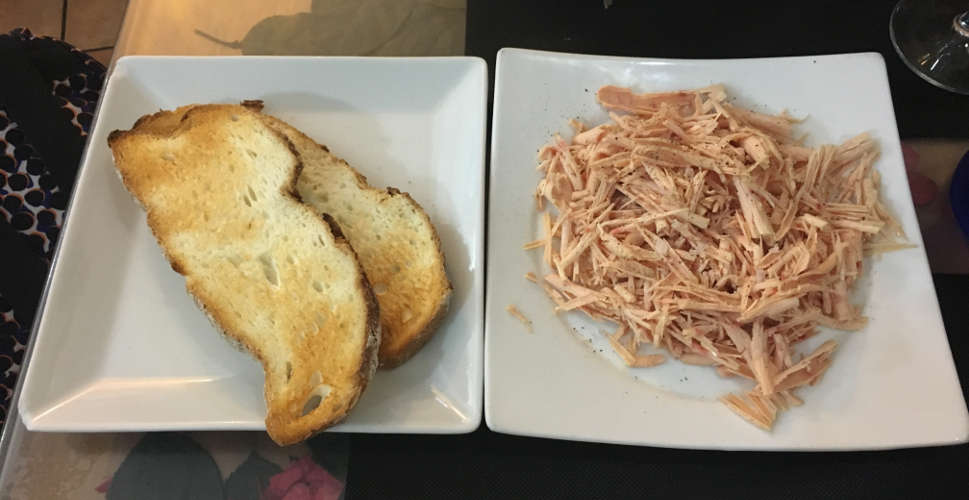 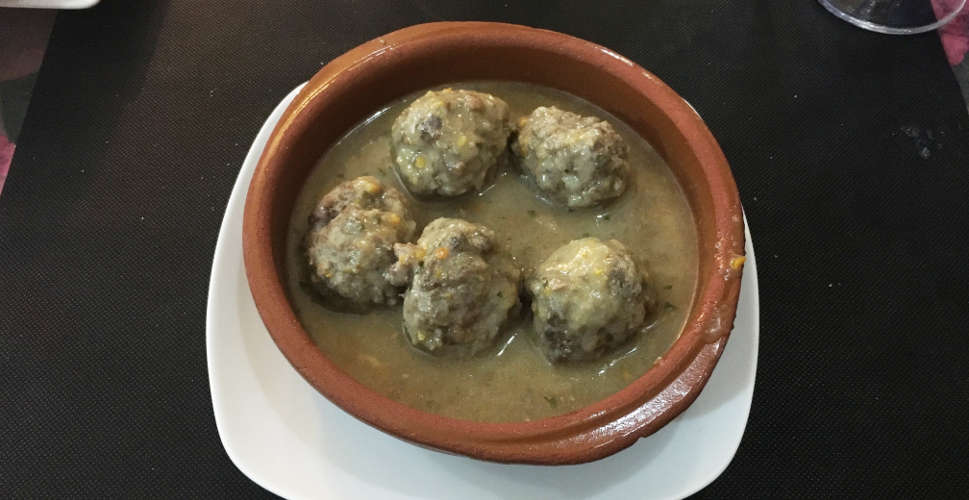 When we finished with the eggs, they asked us if we wanted some dessert… our stomach was about to burst! But after hearing Russian cake and chocolate coulant… abracadabra! Suddenly there was still a little space left in our stomach! That night it seemed that the warm temperatures had evaporated our ability to decide, so we ordered both. A Russian cake with iced coffee for Isabel, and a white chocolate coulant for me.When we left the restaurant we just wanted to roll to the hotel, but we forced ourselves to walk again till the Stone Bridge to see the cathedral lit up at night. Really nice! 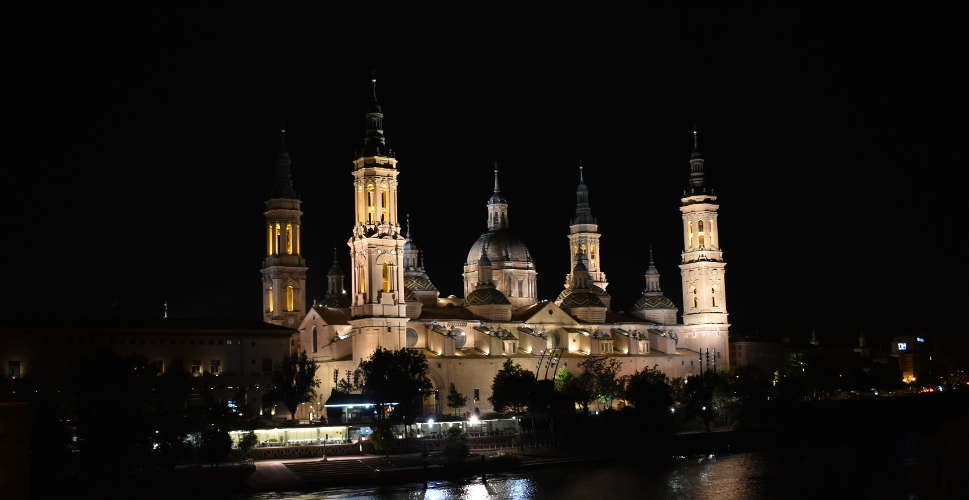 The next day, we got up at a reasonable hour. After eating a couple of pieces of homemade brownie for breakfast – a brownie made with a recipe that cost me almost a year and a half to get -, we went straight to the Basilica. We arrived at the time of the mass and, after seeing the Virgin of the Pillar, we looked for the signs of the Civil War. Entering from the Plaza del Pilar, you will see two exposed bombs on the last big pillar, and if you look up, a little to the right, you will see one of the holes that made one of the bombs fall. From there, we left the church and, bordering it towards the river, we reached the tower next to the back door of the monument. From that tower, at a height of 80m, you can enjoy one of the best panoramas – if not the best – of the city of Zaragoza. 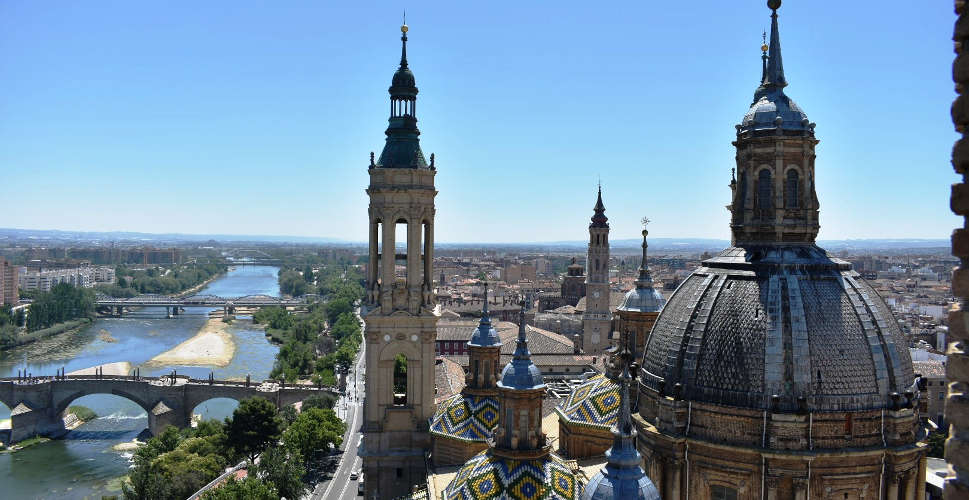 From the tower, we descend again towards the Plaza del Pilar to see the Globe of the square dedicated to the Discovery of America, where there is the Fountain of Hispanidad (Columbus Day). From there, we went straight to the statue of Caesar Augustus, where I remembered that there were the arches of the old Gate of Toledo, but they are no longer there… only the statue of the frog (a fountain projecting a jet in the form of an arch) and the statue of César Augusto remains, in front of the market. 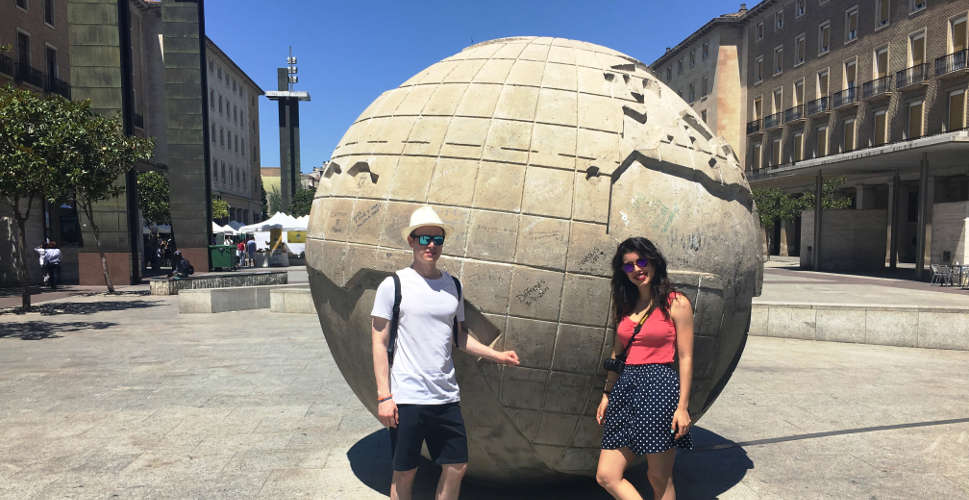 The lunch hour was approaching and although our intention was to go to Casa Hermógenes Restaurant on 14th of Libertad Street , when we called the night before to book a table, they told us that the restaurant would remain closed for the next two months for renovations. Anyway, as there are many gluten free restaurants in Zaragoza, we checked the group “500.000 establecimientos sin gluten” on Facebook, and we decided to go and try La Jaula de Grillos at number 19 on Calle Juan Bruil, very close to Paseo Independencia. This is a restaurant where everything is gluten-free, very similar to Más Que Bocados Sin Gluten, our preferred restaurant in Alcalá de Henares. 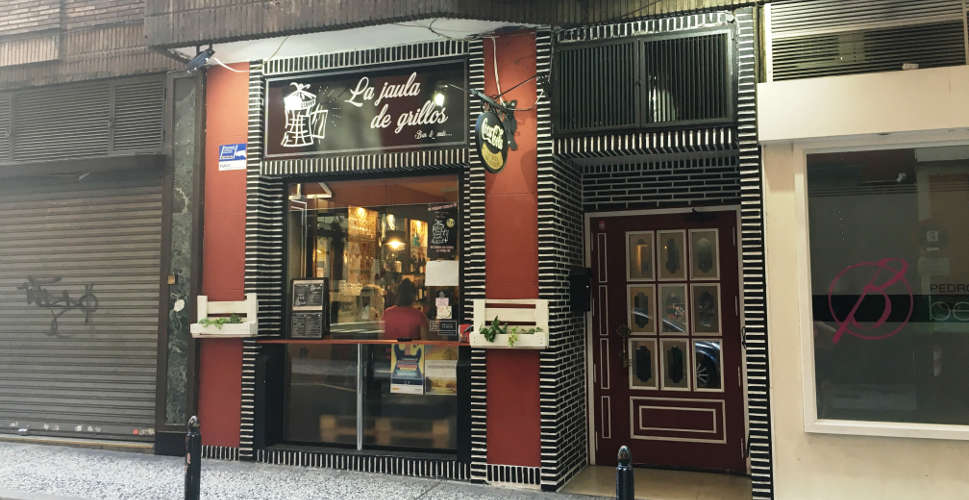 In this restaurant we did not have to worry about looking for the gluten free symbol as everything was already gluten free. This time we ordered a Galleguiña, a Galician beef burger, goat’s cheese, caramelized onion, pan with “tomatico” (tomato) greased and lettuce and a Pizza Carbonara with cream, bacon, “cebollica”, mushrooms, a base of fried tomatoes, mozzarella and oregano. Also, they had a sort of tapas promotion for a euro and we ordered a gluten free tapa of goat cheese and chocolate. A very strong contrast of flavors. Our intention was to share both dishes, but we could not. 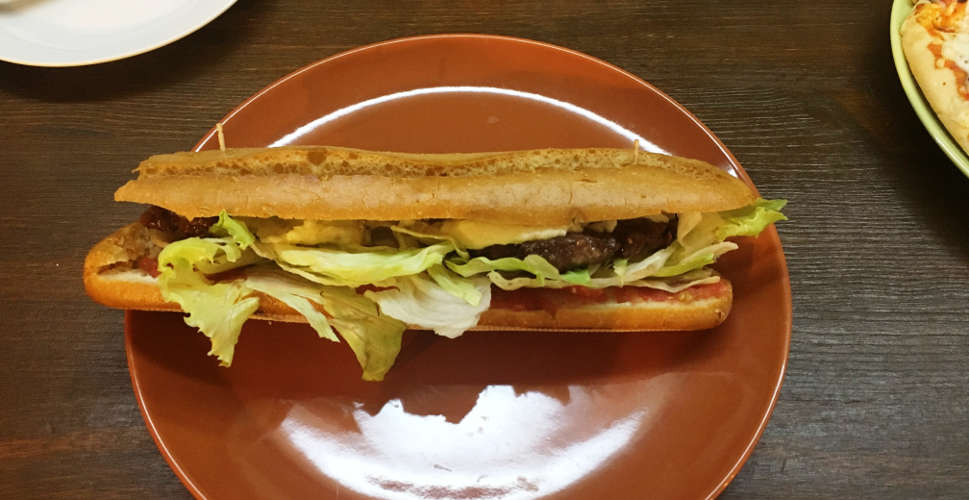 When they brought the hamburger we couldn’t stop smiling while looking at the awesome dish we had in front of us. Same with the pizza, that came with loads of cream! I do not know why, but the color and texture of the edges of the pizza reminded me of pizzas made with gluten-free wheat starch. As Isabel is allergic to wheat, before letting her try it we asked the waitress and… bingo! They used gluten free wheat starch for the pizza dough. Although the cook offered to prepare a pizza dough special for us, as we already had both dishes, Isabel ate the whole burger and I had the pizza. When we left, we went for another ice cream and, as the heat was beginning to be unbearable, we went to the hotel to rest until sunset time. We wanted to see it from the Stone Bridge. 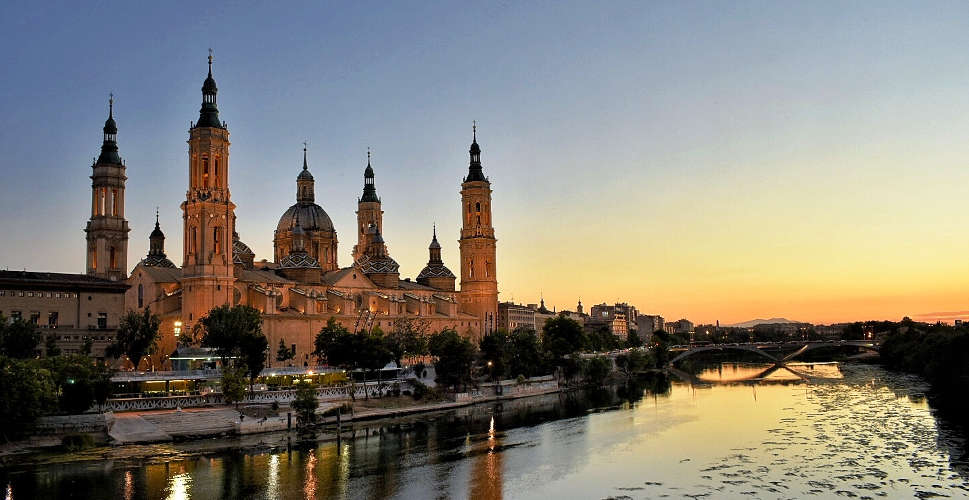 After seeing the sun going down behind the Basilica, we took the tram to go to La Antilla – Parque Grande, in Calle Fray Luis Amigo nº 4. We had recently published a post about La Antilla – Aragonia, and we the owners of the one at Parque Grande contacted us to go there next time, as it is the first one they had, so that we could try it out. Upon arrival there the owner came out to greet us and explained the history of his restaurant and how they had started, many years ago, to offer gluten free dishes. He explained that his place was the first of the three restaurants in Zaragoza and that, some time ago they decided to separate, but maintaining the same name. After showing us the local, we took a photo outside and walked back in to check the menu to order. 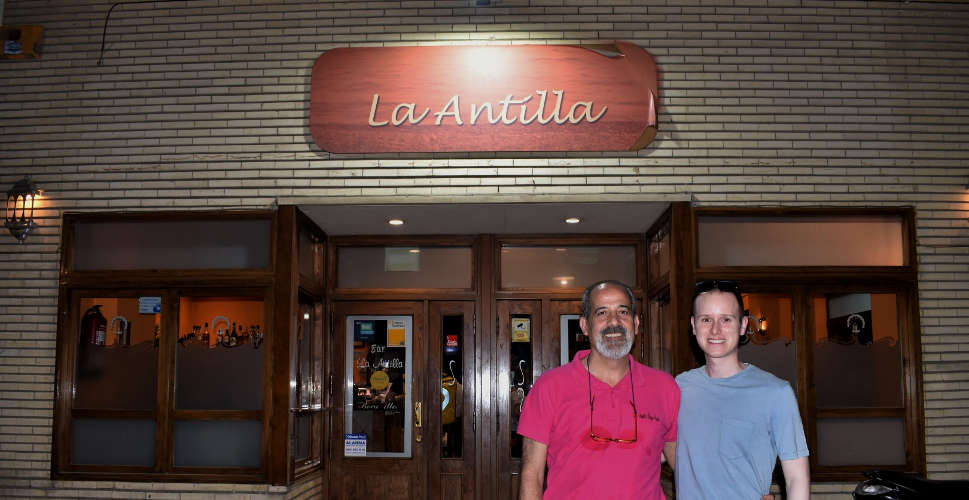 Isabel was eager to try those gluten-free sandwiches I’d talked about so many times. When we opened the menu, we saw that the vast majority of dishes were suitable for coeliacs and they also had home service, which is sure to be the solution for many people in Zaragoza who do not want to go out on Saturday or Sunday but, at the same time they want to enjoy a good sandwich. We ordered the Especial La Antilla (a sandwich with a grilled egg, pork loin, ham, pate, cheese and natural tomato) and a Camembert Special with pork loin, bacon and tomato. Apart from that, we also ordered some patatas bravas which were very good. The sauce was not very spicy, as we like it! 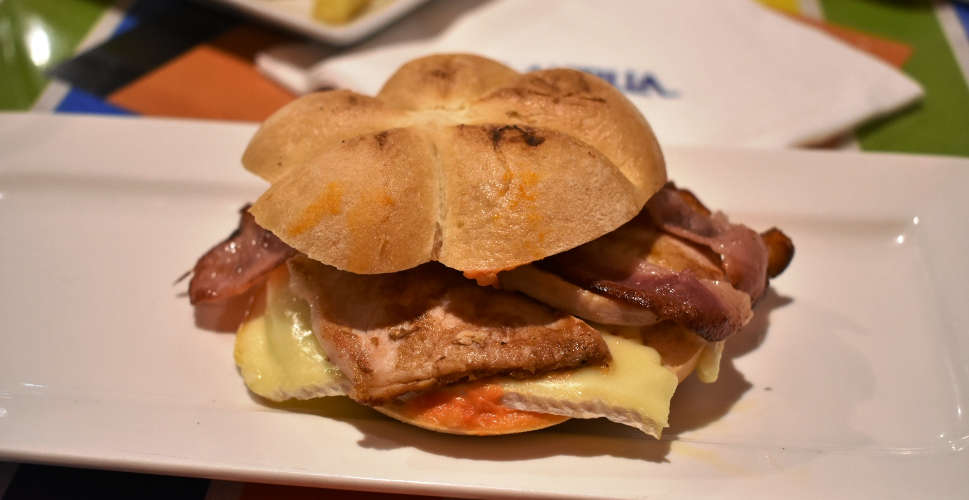 We took the last tram back to Plaza España to get back to the hotel.The next day, we took the late check out option at the hotel and after having the last piece of brownie for breakfast, we went for a walk in the Parque Grande before going to the last restaurant. We booked a table at La Rinconada de Lorenzo, at No. 3 on La Salle Street. This typical Aragonese restaurant is very close to the tram stop of Plaza San Francisco. 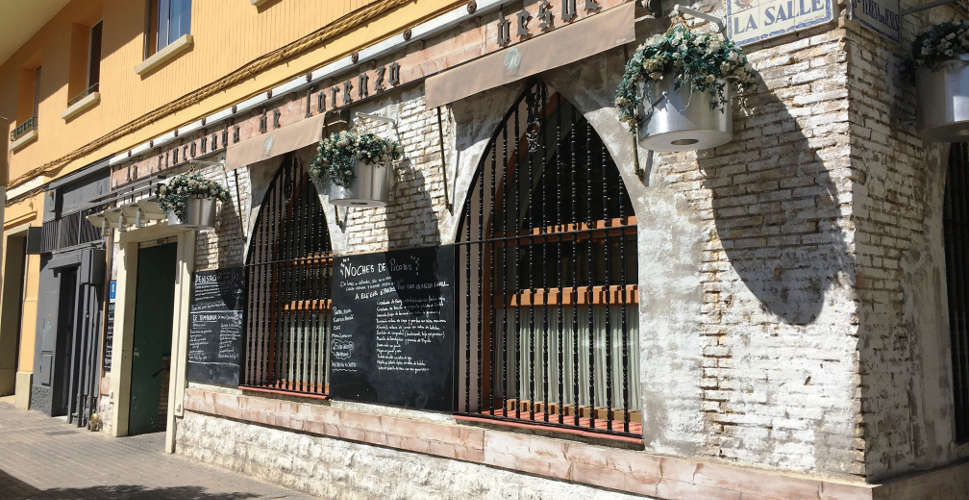 Almost everything in the menu was marked as gluten free and, as we already informed of our celiac condition when we booked the table, when we arrived we already had the gluten free bread at the table. Awesome! As soon as we checked all the menu, we decided to share gluten free “Migas” (bread crumbs) “with everything” (grapes, sausage, ham and egg) . As main course, Isabel ordered the Iberian sirloin with boletus sauce and I ordered a beef entrecote with three fittings.

The truth is that although in the restaurant there were three or four tables of more than 6 guests, the place was no noisy at all. For dessert, we ordered the double mousse of black and white chocolate and a lemon sorbet to the cava to make a better digestion…

And up till here, this was our gluten free weekend in Zaragoza! Delicious!

You can see the other pictures of the trip here.

These are some of the gluten free restaurants in Zaragoza that we didn’t have time to try (if any of you have been, please share your experience!):